I first heard Leonard Cohen in David Williams’s black pick-up truck, and it was the very first time I had seen a cassette deck. As far as I knew, 8-tracks were still the only way to listen to recorded music in a moving vehicle. I think Robin Kellam was with us. I think we were driving north on Highway 61. But one thing I do remember for sure: it was the song “So Long, Marianne” that snatched my attention.

The female back-up singer in the chorus struck me as deliciously retro bordering on clunky, and then there was that gypsy vibe, those exotic Middle Eastern instruments[1] and the lush religious imagery. In the David Remnick profile that appears in this week’s New Yorker, Cohen describes the audience he sought to reach: “inner directed adolescents, lovers in all degrees of anguish, disappointed Platonists, pornography peepers, hair-handed monks and Popists.”

I lit a thin green candle

to make you jealous of me,

but the room just filled up with mosquitos.

They heard my body was free.

Yes, I was a romantic back in those days but thankfully not of incurable variety. By the time I was out of college, Cohen had begun to bore me a little (and still does). Even his former lover Joni Mitchell dismisses his as “a boudoir poet.”

Bores me except for the occasional killer composition like “Tower of Song” and “First We Take Manhattan,” which I heard Warren Zevon cover explosively at the old Music Farm on East Bay Street.

They sentenced me to twenty years of boredom

For trying to change the system from within

First we take Manhattan, then we take Berlin

However, what do I know? Here’s Remnick quoting Dylan:

I asked Dylan whether he preferred Cohen’s later work, so colored with intimations of the end. “I like all of Leonard’s songs, early or late,” he said. “” ‘Going Home,’ ‘Show Me the Place,’ ‘The Darkness.’ These are all great songs, deep and truthful as ever and multidimensional, surprisingly melodic, and they make you think and feel. I like some of his later songs even better than his early ones. Yet, there’s a simplicity to his early ones that I like, too.”

Speaking of the end, when Cohen learned his former lover and muse Marianne Ihlen, the Marianne of the song, was dying, he sent her this email:

Well Marianne it’s come to this time when we are really so old and our bodies are falling apart and I think I will follow you very soon. Know that I am so close behind you that if you stretch out your hand, I think you can reach mine.

I’ve always loved you for your beauty and your wisdom, but I don’t need to say anything more because you know all that… Goodbye old friend. Endless love, see you down the road.” 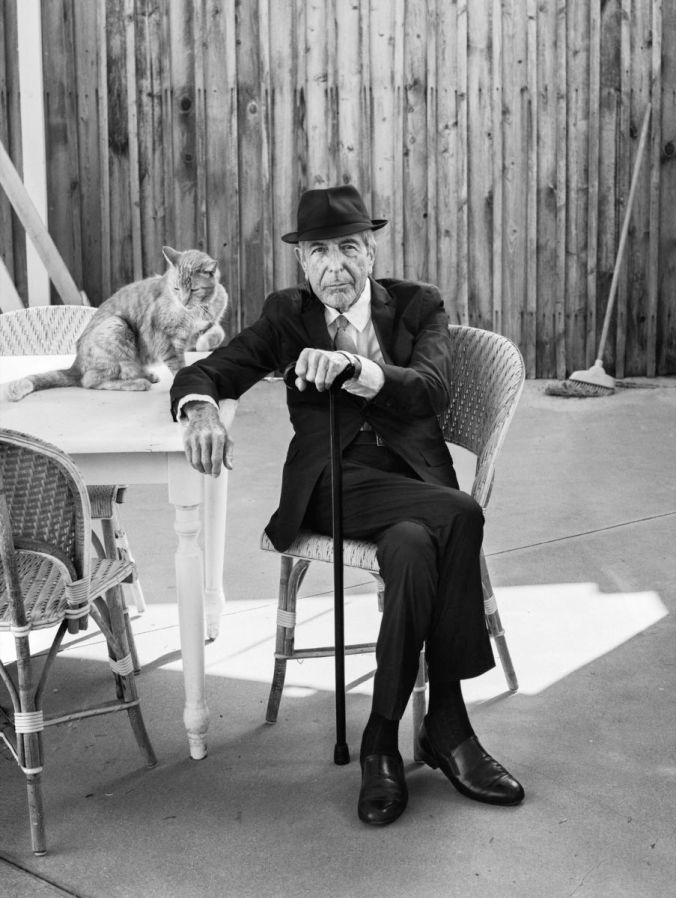 One night you’re barreling up Highway 61, and the next thing you know you’re an old man getting your house in order.

It’s clear from Remnick’s article that Cohen wasn’t joking in his email to Marianne. He’s “not long for this world.”

“I’ve got some work to do.  Take care of business.  I am ready to die.  I hope it’s not too uncomfortable.  That’s about it for me.”

Let’s cue up some Yeats, one of Cohen’s boyhood heroes:

The death of friends, or death
Of every brilliant eye
That made a catch in the breath—
Seem but the clouds of the sky
When the horizon fades,
Or a bird’s sleepy cry
Among the deepening shades.

Whatever else you can say about Cohen, you cannot deny this: he is, in the phrase of my dear friend Jim Klein, “a cat.”

[1] Played, by the way, by David Lindley

4 thoughts on “Leonard Cohen’s Saunter into ‘That Good Night’”