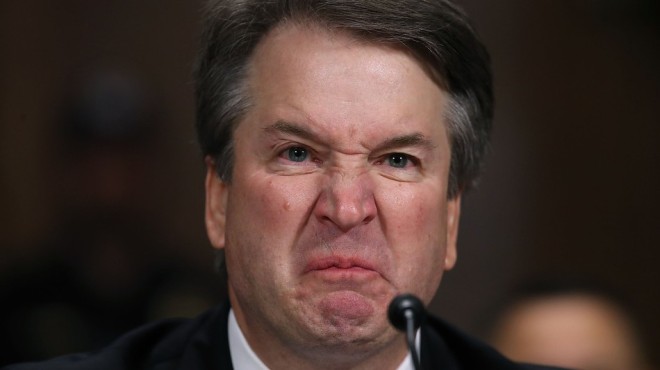 Although Brett Kavanaugh slung a slew of lies under oath Thursday[1], he did get one thing right.  His reputation has been forever ruined, and by my reckoning, his sniveling lachrymose barking performance Thursday played a significant role in furthering tainting what he likes to call his “good name.”  Now we know that, not only was he a sloppy drunk who may have sexually abused more than one woman, but also that even as an adult, he’s a spoiled brat who thinks he’s better those below him (ie., everyone).

Ultimately, without corroboration, the allegation in question at the hearing amounts to a he said/she said stalemate.  On the other hand, his performance during that hearing makes it perfectly, unequivocally clear that he is an asshole in the league of Pride and Prejudice’s Lady Catherine de Bourgh.  We’re talking pantheon dwelling assholedom.  Zeus, Ted Cruz, Trump.

Yet, I read on Twitter that the White House was thrilled with his guns-blazing impertinence, saw it as “masculine.”

What?  Masculine?  If whining and anger denoted masculinity, Lindsey Graham = the Marlborough Man.

No doubt you’ve already seen this, but just in case:

Since when has pouting insouciance become to denote masculinity?

Kavanaugh seems to think that because he got into Yale, was a popular jock at a prestigious prep school, attended church, etc. that he is somehow above being questioned about a serious allegation.  When one senator asked him had he ever blacked out from over-drinking, he barked back, “Have you?”

I mean, his sense of entitlement out-neros Nero, which, according to philosopher Aaron James’ Assholes, a Theory is the defining trait of assholedom:

Our [i.e. James’s] theory has three main parts.  In interpersonal or cooperative relations, the asshole:

If little Brett had any sense, he’d withdraw his name, resign his judgeship, and sign on with Fox News.  That would take care of his serious cash flow problems. His financial disclosure statements clearly demonstrate a lack of restraint, that the judge lacks good judgment. He buys houses he can’t afford, joins country clubs he can’t afford, etc.

Anyway, if his story teaches us anything, it’s that in the Republican Party, power trumps decency, that sexual assault isn’t taken all that seriously by lots of men, and that males and females are held to much different standards when it comes to their deportment in hearings.

Oh, yeah, and being an asshole in high school can come back to haunt your ass. 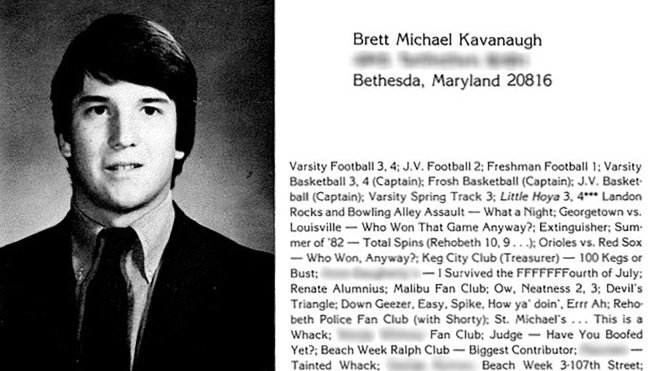 [1]Eg, in his yearbook, he referred to “the devil’s triangle” as a drinking game.  Here are two definitions from the Urban Dictionary:

Larry: Did you hear that Eric and Brian were in a Devils Triangle with Sarah last night?
Brad: Yeah man, I did, what homo’s.
Larry: No man, its cool, they didn’t make eye contact.

2 A made up game of quarters with three cups arranged in a triangle. The rules are unknown because the inventor of the game, Brett Kavanaugh, could not explain them under oath.
“Hey Renate? Want to play devils triangle with Mark and I (sic)?” Brett asked.

How about with invasion, muskets versus bows and arrows. Wind borne lamentations. Later, clinking chains, songs of woeful repetition.  The worst kind of karma, evil spreading out in concentric circles, spreading like an oil spill, sullying every man, woman, and child.

This degradation is Faulkner’s great theme: the darkness of terrible wrongs blighting the landscape, passing from generation to generation, destroying both the rich and the poor, Joe Christmas and Quentin Compson.

These shadows – genocide, slavery, the War – incubate the genre’s monsters: incestuous aristocrats, necrophilic halfwits, sadistic Alabama sheriffs – not to mention the supernatural, hoodoo and haunts.  No wonder Southern Gothic has become a genre unto itself.

WB Yeats is purported to have said, “All of the leprechauns are dying out because no one believes in them anymore.”[1]

You need people who believe in the supernatural for Gothicism to thrive.

When I was little, I remember asking our maid Alice who was part Cherokee and part African if she believed in ghosts, and she told me that she had seen her father standing in her backyard the night after his death. Sitting in a Ford Fairlane 500 in the parking lot of the Summerville Piggly Wiggly, I could see wonder and dread in her face when she told me about that visitation.  I heartily believe if you had pumped Alice with sodium pentothal, she would have sworn she had seen her father’s ghost in that backyard. The dog was howling she said; a howling dog is a sign of a death.

Lots of white folks believe in ghosts as well.  Even some of my students believe.

So, down here, or at least in the Lowcountry of South Carolina, I suspect that ghosts aren’t in any imminent danger of dying out.

Then, there’s that other non-supernatural strain of Southern Gothicism, the suicide hanging in the attic, the alcoholic great aunt who gave birth to the idiot child.

A few years ago at one of Shirley Gibson’s killer dinner parties, I got a heavy dose of that more mundane variety of Southern Gothic when I sat next to [potentially off-putting name-dropping warning] Walker Percy’s niece (Melissa).  She told me the story of her grandmother’s death, her plunging her car into a creek with Melissa’s father in the car. Her father, only nine years at the time (six years younger than his brother Walker), somehow managed to extricate himself from the automobile, but his mother would or could not escape.  Uncle Walker, she told me, regarded the death as a suicide. Suicide runs in the family.  Walker Percy’s grandfather, the son of a Civil War hero, had killed himself with a shotgun; his son, Melissa’s grandfather (Walker’s daddy), also committed suicide.

After crawling his way up the creekside, Melissa’s father waited on the side of a desolate Mississippi road in the middle of nowhere, his mother a corpse in the car.  He sat there alone for twenty minutes. Melissa said that the next car that came by was Uncle Walker’s.  They, along with another brother, were now the orphans of suicides, fortunate to find a good home with their uncle but forever darkened by the ever-spreading shadow. At the time, her father was still alive – though not alive – in a nursing home, one of the living dead. 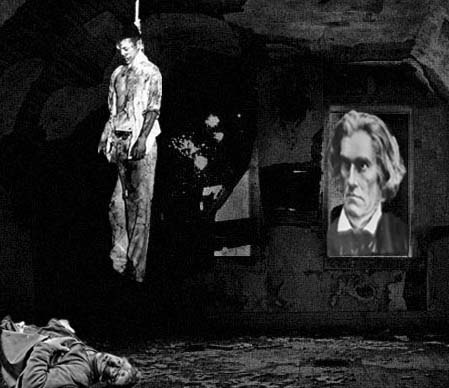 The Attic by Wesley Moore III

Of course, as they widen, concentric waves eventually dissipate, and it seems logical that with the passing of years and with the homogenization of the South, Southern Gothicism might well be on the wane as a literary genre.  I do know that the Charleston brogue has about had it. A few of my students’ parents still motor aboot in boo-oats casting for shramp, but none of their sons and daughters do.  They clept their mamas and daddies moms and dads. I’m a dad myself.[2]

Nevertheless, Southern Gothic seems more durable than our regional accents, at least as long as Cormac McCarthy, Donna Tartt, and Ron Cooper dream into being their dark worlds where the ghosts of the past still rattle their chains, where bigotry, fanaticism, and incest still breed monsters.  People seem to enjoy the macabre, get a rush from skulls and insanity.  It makes them feel alive I suppose.

Some types of creepiness do possess a certain amount of charm: 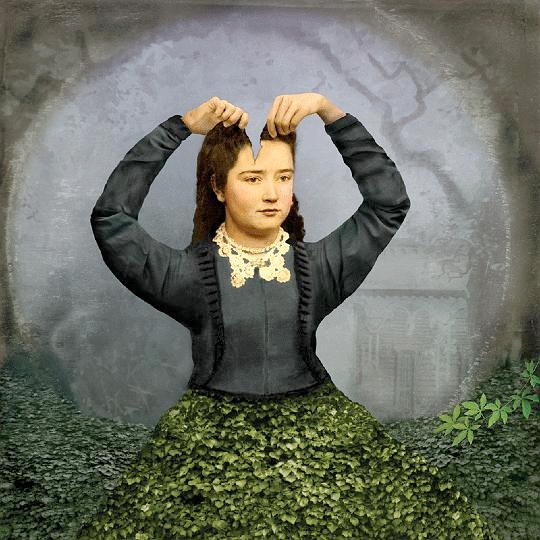 Others not so much.

[1]In fact, I’m starting to feel like a ghost myself sometimes.

[2]I can’t remember where I read this quote, and I so want it to be true that I dare not attempt to verify it. 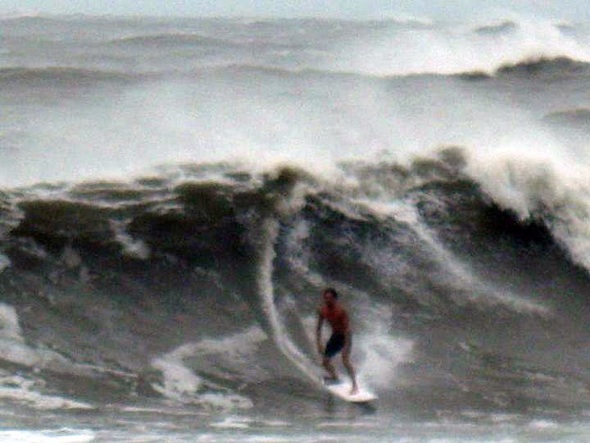 I had this post all mapped out in my head as I drove to Folly Beach from West Ashley this morning.  Since public safety is allowing only residents on the island, I have the beach to myself, more or less.  I drove to the Washout, Folly Beach’s premiere surf break, ready to write about the awesome swell and how twenty years ago I would have been right there with those well-warned surfers, struggling to paddle outside of the break, and once I’d made it, how I’d be eager to catch one of those monsters, hoping to make the drop and achieve stokification or, perhaps more likely, to suffer a crushing avalanche-like wipe out.

I was going to complain that now I was too old to even try, reduced to getting my thrills vicariously, like the old man in The Big Sleep. (I suspect that William Faulkner, who received partial credit for the screenplay, wrote this part).

The problem is here is the Washout on Day 4 of Governor Henry McMaster’s mandatory evacuation.  It’s as flat as a John Brown’s EKG.*

On Monday afternoon, declaring that even one life was too precious to lose, Governor McMaster, who refuses federal Medicaid money, ordered a mandatory evacuation of the South Carolina coast.*  Drop everything, close your businesses, find refuge with loved ones or at Motel 6 inland (which doesn’t sound all that safe to me).

And for the third year in a row the mandatory evacuation was completely unnecessary for Folly Beach.  Four school days down the drain.  Millions of dollars squandered.

A legitimate fear is that when a real storm comes a-callin’ some of the population might be too jaded to take warnings seriously.  I’m all for evacuating for deadly storms but not when they’re a week away and their paths uncertain.

*”John Brown’s body”, of course, “lies a-mouldering in the grave.”

My father had some admirable qualities, but equanimity wasn’t one of them.  For example, once, during my teenaged years, when the phone rang once too often to his liking, he ripped its wires from the socket and hurled the entire apparatus against the wall.  Although incidents like this were rare, they occurred often enough to put us on edge. Unfortunately, after I left for college and his business started to go under, financial pressure exacerbated his anger.  When my younger brother Fleming and sister Sue Ellen entered their adolescence, the household became more and more turbulent.

Not too surprisingly, Fleming started to get into trouble.  Anger is contagious – or at least it was for us.  While I was up in Columbia playing the role of angry young man, Fleming was back in Summerville mouthing off, experimenting with drugs, and getting arrested for this and that.  Eventually, he was expelled from Summerville High School.

Nevertheless, he earned a GED and later a BA in mathematics and got a job teaching high school for Berkeley County.

Thanks to a fairly robust his drug habit, his teaching career was short-lived, and Fleming spent years in and out of rehab, ultimately getting hooked on crack.  Oh yeah, before that, he suffered a couple of strokes and had a heart valve replaced while still in his twenties. 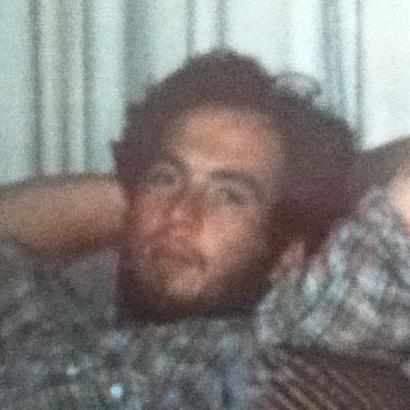 Although I do not believe in a personal god, I know that Jesus can save lost souls, because he saved Fleming, who has been sober/straight now for going on a decade.

During this time, he has been writing and playing music.  Just recently, reverb.com invited him to Brooklyn for a recording session.

My hope is that some established star records one of his songs because they’re really good, both melodically and lyric-wise.

Here’s a clip from a recent gig at Bowties in James Island.

The song is entitled “In the Holy City,” a tribute to the love offering of the relatives of  the victims of the Charleston massacre.

Anyway, never give up on someone.  If you’re in the Charleston area, you can catch Fleming and his band at Bowties Thursday 18 October at 7.  I’ll certainly be there.