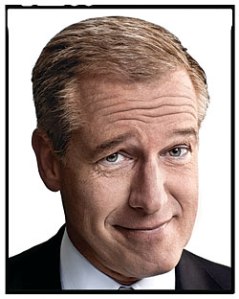 It appears that handsome, parabola-jawed NBC anchor Brian Williams has gotten himself into a fecal tonne of trouble by claiming he was on a helicopter shot down by insurgents in Iraq during Baby Bush’s war. In fact, Williams flew in a helicopter trailing the one that got shot down. His helicopter did land next to the downed chopper, and they were stuck in the desert for a couple of days getting blasted by a sandstorm so it ain’t exactly life he’s saying he was in one of the Twin Towers on September 11 or that he’s shot smack with William Burroughs.

Unlike many in the press with their pitchforks and torches, I don’t see why enhancing a personal story should disqualify Williams from sitting behind a desk and reading from a teleprompter text that other people have written about what has happened elsewhere — about that plane going down in a distant ocean, that aide worker’s beheading, that great grandmother’s going back to community college at 85 to learn keyboarding — events that he had nothing to do with and therefore couldn’t be exaggerating — that is, unless he is a congenital liar prone to extemporaneous embellishments of teleprompter text.

[Cue Williams with extemporaneous additions in italics]: An 85-year-old grandmother pregnant with quintuplets isn’t standing on her laurels as we see in this next segment.

I can see, though, why some military people and imbedded reporters might resent Williams’ false claims of bravado, and I do think his mealy-mouthed self-serving apology hasn’t done him any favors:

On this broadcast last week, in an effort to honor and thank a veteran who protected me and so many others following a ground-fire incident in the desert during the Iraq War, I made a mistake in recalling the events of 12 years ago. It didn’t take long to hear from some brave men and women in the air crews who were also in the desert. I want to apologize: I said I was traveling in an aircraft that was hit by RPG fire. I was instead in a following aircraft. We all landed and spent two harrowing nights in a sandstorm in the desert. This was a bungled attempt by me to thank one special veteran, and by extension: our brave military men and women — Veterans everywhere — those who have served while I did not. [my emphasis]I hope they know they have my greatest respect. And also now my apology.

According to Williams, the fiasco is merely a thank-you note gone cruzy (a word coined by a student of mine in the 80’s that means exactly what it sounds like it means).

Enough about Williams, though, let’s talk about someone more interesting — me. As my regular readers know, I touched upon the topic of “misremembering” just TWO POSTS ago and argued that it’s very possible to imagine having done something interesting and for that imagined event to migrate into the legitimate memory file in the metaphorical hard drive of the mind.

You’re absolutely, positively certain it happened and probably could pass a polygraph to that effect, but as it turns out, your memory is merely an illusion.

Terrified that I too might get called out on faux memories of my own, I’ve gone back and investigated several of my exotic remembrances, and while I find the vast majority to be true, I have also discovered that I’ve been misleading people for decades about a brush with a major celebrity that ends up being a brush with a very minor celebrity.  Of course, there’s nothing more sacred to a blogger than his credibility, so want to set the record straight. 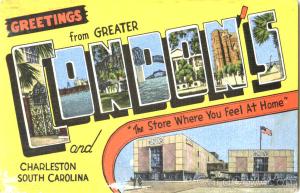 note the catwalk between the buildings

It’s a sunny brisk December weekday in the late ’50’s, and Mama has let my brother David. my aunt Virginia, and me skip school to accompany her to Charleston to visit her Aunt Ruby who lives on Warren Street right down from Condon’s Department Store where Santa Claus sits in the middle of the catwalk that bridges the two Condon buildings across the street from each other.

After our Santa visit, we go down King to Woolworth’s for lunch and find seats at the counter and bask in that unique Woolworth lunch counter odor of mayonnaise mixed with fried food. As we sit there, a beautiful blonde with cherry lipstick swishes her way past us and takes a seat with her companion, a hatchet-faced man in a fedora.

Virginia, my aunt but only six years older than I, elbows me and asks, “Do you know who that is?”

It’s Marilyn Monroe and Joe DiMaggio. Go ask them for their autographs.”

Virginia digs her fingernails into my skinny arm, penetrating to the bone, so I get up and ask the couple for their autograph.

“Why in the world would you want my autograph, sweetie pie?” the woman asks while her companion stares down at his menu.

The woman smiles wryly, reaches for a napkin and signs it, “Bambi Jones.”

I take it back and say, “It’s not Marilyn Monroe.”

Virginia grabs the flimsy napkin and peers angrily at it. “Oh yes it is,” she says. “That’s the name Marilyn uses to check into hotels so people won’t invade her privacy.”

So for years now, I’ve been telling people I bumped into Marilyn Monroe and Joe DiMaggio in a Woolworth’s. 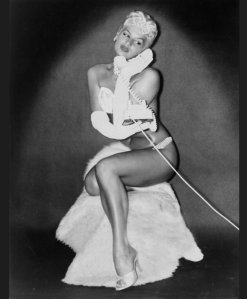 However, after some digging, I have sadly discovered that Bambi Jones was not the faux nom Norma Jean/Marilyn used when traveling but the name of a platinum-haired stripper whom I guess could have been mistaken for Marilyn Monroe by a 13-year-old aunt desperate for some color in her otherwise dull, black-and-white existence.

Okay, now for my heartfelt apology:

First, I’d like to apologize for my mother’s liberal parenting. The skipping school and going to see Santa was all her idea, and, of course, if she had been a more conventional mom and made me go to school that day, I never would have found myself in the compromised position of being seven and asking a stripper for her autograph.

Furthermore, I’d like to apologize for Virginia’s mistaking Brandi for Marilyn, which is the genesis of my disseminating a falsehood that I’ve spread at family reunions, cocktail parties, and most notably at Woodstock where after taking a triple double hit of windowpane, I told and retold the story for 12 consecutive hours, thus depriving myself the pleasure of witnessing Ten Years After’s killer performance of “I’m Going Home” and costing me a half-dozen friends.

Furthermore, I do sincerely apologize for trying to make your life a little more interesting by putting you several degrees of separation closer Marilyn and the Joltin’ Joe, and I double apologize for now disillusioning you. 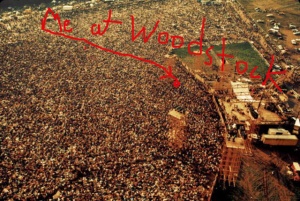 Aerial photo of me at Woodstock

8 thoughts on “My Most Cherished Mismemory Debunked”