About a month ago, I posted a piece imagining Shakespeare writing a play about Trump’s presidency.

In that post, I suggested that Shakespeare would begin his Trump play with the inauguration speech, jazzing up clunkers like “for many decades we’ve enriched foreign industry at the expense of American industry;/ Subsidized the armies of other countries while allowing for the very sad depletion of our military” with some thumping blank verse that foreshadows an upcoming shitshow.

Interestingly enough – call it synchronicity or cultural convergence – Shakespeare’s and Trump’s names have been linked at least twice this week. First, the Public Theater’s Central Park production has spray-painted, as it were, the tragic protagonist of Julius Caesar an obvious shade of Trumpian orange.

Via Jesse Green of the Times:

The line “If Caesar had stabbed their mothers, they would have done no less” has been updated by the insertion of the words “on Fifth Avenue” before the comma.

This production, not surprisingly, has generated controversy. Some on the right, people ignorant of the play, suggest that this version endorsees the assassination of Trump.[1] However, Shakespeare’s staging a pro-regicide play in Elizabethan England would be the equivalent of someone painting an obscene mural of Mohammad and Salman Rushdie in flagrante delicto on the side of a building in Tehran.

In other words, not a good idea for the non-suicidal.

In fact, Julius Caesar dramatizes the disastrous effects of the assassination, not only for the conspirators themselves, but also, more significantly, for the state of Rome.

Even though I’m no fan of violence, it is sort of fun imagining Republican cabinet plotting and carrying out an assassination on stage. 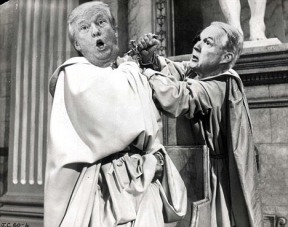 Speaking of Trump’s cabinet, no doubt you’ve read about or seen the cringe-worthy abasement Trump subjected his minions to in his first cabinet meeting when he forced them to utter what an honor it was to serve him, what a privilege, etc.

In other words, he reconstructed the opening scene of King Lear, the greatest and most awful of Shakespeare’s tragedy.

It’s even more fun – at least for me – casting a Trumpian Lear – with Ivanka as Goneril, Eric Trump as Regan, and poor Tiffany as Cordelia. Maybe Dennis Miller or PJ O’Rourke as the Fool? Jared as Edmund?

Bring it on, Chris Marino.

[1] Delta and the Bank of America have withdrawn financial backing. However, no one seemed to mind that Bob Melrose staged an Obama as Caesar production in 2012 that you nor I ever heard about at all.

One thought on “Trump Channels Lear and Caesar in Summer Stock”