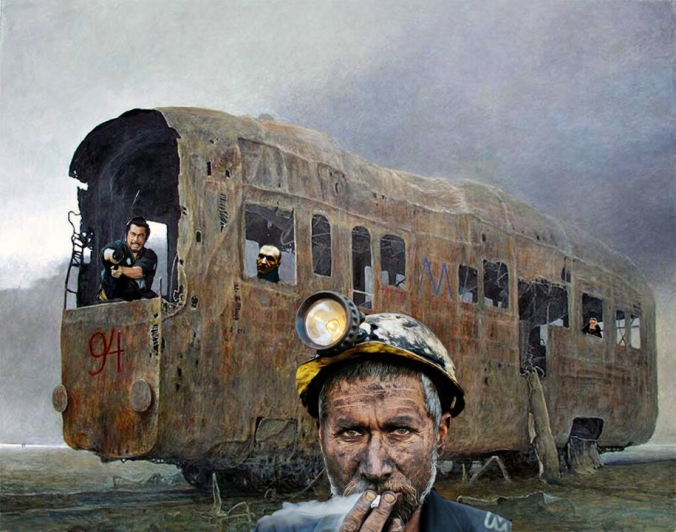 by WLM 3 based on Zdzistaw Beksiński

I’m ashamed to say that I’ve never seen any of the Star Wars movies — not the blockbuster first installment of 1977 nor any of the vast array of sequels and prequels that in subsequent decades have rolled off the Lucas assembly line like so many gold-plated Model-Ts.

As a subscriber to the NY Times crossword puzzle, I have been punished for being ignorant of such worthies as Jabba the Hutt and Obi-Wan Kenobi, the same way I have punished for not having read any of the Harry Potter books.[1]

What’s the 5 letter word for first name of the astromech droid that appears in every Star War movie?

I did try to read the first Potter novel but got about as far as I did when I attempted The Hobbit as an eighth grader. Blame my lack of interest on a leaden suspension of disbelief. I prefer Robin Hood to the Arthurian legends, the Lone Ranger to Flash Gordon, Sopwith Camels to starships. In other words, I don’t dig fantasy and most science fiction, which is not to say they’re not worthy genres. I don’t dig opera either, but I realize my lack of appreciation stems from ignorance and that I’m ultimately missing out on something truly wonderful.

But as far as Jabba the Hutt and Harry Potter go, personal predilections are no excuse for my ignorance. As a self-anointed anthropologist/social critic/prophet-of-doom, it should be my duty to study these cultural phenomena, these projections of our collective psyches, these myth-equivalents that shed light on “deep down things.” [now removing tongue from cheek]

Nevertheless, it ain’t gonna happen. I still haven’t read Proust or become closely acquainted with the films of the supposedly great Soviet director Tarkovsky so the idea of spending the ever decreasing number of my allotted Sunday afternoons matriculating into Hogwarts is way too much of a cross to bear.

What has brought these considerations to mind is that last week a candidate for a position in our English Department taught a demo class to my 9th graders as a sort of audition. Surprisingly, rather than reprising some proven boffo performance of poetic analysis from his past, something tried and true — as most aspirants do — he decided to go with what I am teaching, Orwell’s 1984.

He started the lesson by discussing Newspeak and the implications of the ruling party’s attempt to strip language of all nuance, a topic we’d already covered at length. Why complicate your life by having hundreds of words like grackle, wren, and bunting when the simple word bird would suffice? Does language play a role in helping us distinguish nuances?

Is the Jesuit Pope a communist from Argentina?

Are rhetorical questions possible in Newspeak?

Things got cracking when he shifted from language to genre. He said that he first read the novel as an undergraduate in a science fiction course. He asked the students to define science fiction and coaxed them into coming up with the idea that science fiction is a realistic depiction of the human condition featuring technology that doesn’t yet exist but is central to the plot.

He then asked if Star Wars were science fiction. One student said that no, it was fantasy, and the teacher agreed pointing out that each planet has a singular topography – desert or swamp or city or forest – so what we’re essentially dealing with is the planet earth. He added that the weapons are essentially swords, and spaceships lie well within the reality of current technology. He argued that we’re talking magic, not science here, and basically Star Wars is a Samurai movie set in outer space. As his name suggests, Obi-Wan Kenobi is in a sense a by-product of Japanese cinema, particularly Kurosawa’s 1958 samurai epic The Hidden Fortress.

The teacher then shifted back to Orwell, and the students identified telescreens[2] as the technology that qualifies 1984 to be considered as science fiction. In 1948, the year it was written, television was in its infancy, and telescreens did not exist (nor did they in the teacher’s undergraduate days).

They do now, however. After all, when I was with my wife in Houston at MD Anderson at the beginning of the school year, I taught this very class via Skype, which is essentially a telescreen but one that allows for two-way communication. So according to this line of thinking, 1984 can no longer be considered “science fiction.”

The teacher pulled his cell phone from his pocket and said, “Unlike the citizens of Oceania, we subscribe to our telescreens, actually pay Big Brother to collect the goods on us. (Of course, these aren’t the exact words he used).

Anyway, he went off on a rift on technology and dystopia and an era in the near future (about the time they’d be graduating from college) when automation might be eliminating quaint old human orchestrated procedures like cancer surgery. He mentioned nanobots replacing surgeons, and I imagined hordes of ravenous Pac-Men seeking out and devouring malignant cells.

A rather sobering and a subtle suggestion that future competition might be, shall we say, cut-throat, and that studying might be a good strategy, especially when it’s not only coal miners and sales clerks who will be out of work but also CPAs and surgeons.

At any rate, class ended, and the actors marched off leaving me alone in my room (101, by the way) contemplating a smog-smothered future where it’s always twilight or pitch black night, a future where hordes of the unemployed have devolved into urban tribal communities, in other words, the world of Blade Runner.

But, hey, fa-la-la-la live for today, in this case Sunday, 9 a.m EST. With Kim-Jong un, Putin, and the Donald rattling their lightsabers, we might not have to worry about the future at all.

So I think I’ll have a bloody mary and look out over the real life Darwin-themed drama my back deck provides.

Or maybe scrounge up a copy of À la recherche du temps perdu.

photo from our back deck of a wood stork

[1] As far as Star Wars goes, I do know that Darth Vader is evil, Princess Leia wears white, and that Luke Skywalker is the coming of age hero.

[2] Telescreens are ubiquitous two-way-mirror-like devices that allow the party to spy on citizens and to broadcast propaganda.