Perhaps the least valid complaint coming from you teenagers is that you’re misunderstood.

No, Emerson or Madison or Grayson, lots of us old farts understand you perfectly well, understand that you’re a jambalaya of bubbling hormones and live in a culture of increasing fragmentation.

We understand that you want to break away from the constraints of reading closed heroic couplets and solving quadratic equations. We understand that peer pressure is attempting to crush you into a little container of counter-conformity.

In fact, we understand you better than you understand yourself, because we’re aware of that unconscious fear that you’re repressing: chances are you’re not going to become a ballerina or a pro bowl quarterback; chances are you’re not going to really love your job; not to mention, your looks will fade, your body will thicken, and what faith you have been granted or have summoned will be severely tested.

Your mind refuses to acknowledge your mortality because we’re talking a million years in your perceived future, but the OverYou — the Empire of Your Being, that Universe where unknown to the-lowercase-you armies of white blood cells are attacking a virus and your pituitary gland is spitting out somatotrophins – that OverYou knows life’s story from the inside out, and your adolescent angst is part of the story, as was your birth, as will be the getting old and dying part.

Still, as Richard Wilbur put it in his poem “The Undead,” your pain is real.[2] Perhaps it’s too easy to forget how real. When I was a teenager, my roiling hormonal stew bubbled forth in a severe case of acne; flakes of dandruff trailed from my jive strut like flung confetti. My romantic crushes felt like an earthquake had left me pinned in wreckage.  Everything seemed a matter of life or death.

I did stupid shit — stared into mirrors, cut school, mocked decent people, spent a very un-fun night in the Summerville jail. I would have been so much better off trading in my anger for curiosity, to see everything as art: the unwinding of the formula beneath my #2 lead pencil as poetry and the strict tick-tock of iambs in closed heroic couplets as formulae.

In other words, I would have been so much better off taking a sledgehammer to the claustrophobic acrylic confines of my egocentricity.

This is my advice, teenagers, impossible as it may be. Ditch the loser “lower case you” that you mistakenly perceive as yourself – get over yourself, or better yet, beyond yourself  – and delve into study. Do your homework and while doing so, look for connections. Wonder why all the big beards in the Civil War and the shaved heads in the ‘50s. If a required novel bores you, analyze why that is – is it because Holden’s a whiner or that his slang outdated? Remember it’s the lowercase you Holden doing the talking. Ask yourself what’s going on beneath the surface.[3] At movies, be stingy with your suspension of disbelief, and if the movie succeeds in making you forget about the lowercase you, ask yourself how it managed to bewitch. Not only should you read the footnotes, you should go wander off and get lost in them. Let footnotes lead you astray, not the cool kids beloved of the herd.

Houdini yourself out of Blake’s mind-forged manacles. Find fun in the mundane. In other words, power wash the doors of perception, cleanse them of preconceptions.

If you do so, hypocrisy won’t piss you off nearly as bad, and waiting rooms will become spaces of wonder. 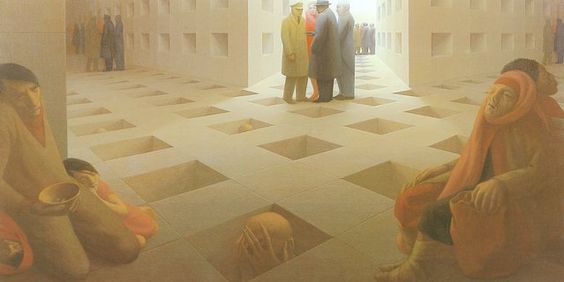 By the way, you gave find more of my parenting advice: here

[1] Death is the mother of beauty; hence from her,

Alone, shall come fulfilment to our dreams

And our desires. Although she strews the leaves

Of sure obliteration on our paths,

The path sick sorrow took, the many paths

Where triumph rang its brassy phrase, or love

Whispered a little out of tenderness,

She makes the willow shiver in the sun

For maidens who were wont to sit and gaze

Upon the grass, relinquished to their feet.

She causes boys to pile new plums and pears

On disregarded plate. The maidens taste

And stray impassioned in the littering leaves.

Of a thrush cold in the leaves

Who has sung his few summers truly,

Or an old scholar resting his eyes at last,

We cannot be much impressed with vampires,

Colorful though they are;

Nevertheless, their pain is real,

And requires our pity.

(Richard Wilbur, excerpt from “The Undead”)

3 thoughts on “My Open Letter to Teenagers”