Identifying and classifying the myriad character flaws of Donald J Trump would be a labor worthy of that grand old-fashioned adjective Herculean.

Where would you begin? Would you merely just start randomly listing his flaws as they came to mind?

Already I’m exhausted, but if the catalogue were to reach its epic end, then you would need to classify the flaws; otherwise, the list would be merely be a reams-long enumeration of pejorative words, a document as interesting to read as a newspaper’s legal notices.

We do have, thanks to Dante Alighieri, a time-honored classification system of human frailties based on the 7 Deadly sins. Perhaps one might do less with more by adapting Dante’s system and plug selections from the Himalayan heap of Trump’s character flaws into Dante’s hierarchies rather than creating an exhaustive (and exhausting) list. 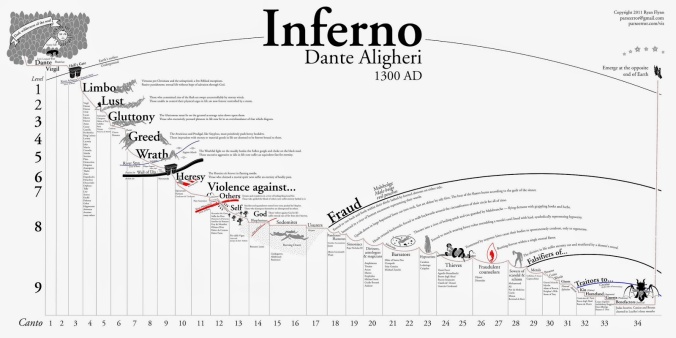 Dante’s system, of course, is not itself ideal. For example, most of us have committed multiple sins throughout our lives. Is your place in the Inferno determined by a predominance of one sin over another? Do you designate Rush Limbaugh as predominately gluttonous or avaricious?

Here, we also run across another problem pointed out by Stephen Dedalus in James Joyce’s Portrait of the Artist as a Young Man: sins tend to overlap and feed off each other:

From the evil seed of lust all other deadly sins had sprung forth: pride in himself and contempt of others, covetousness in using money for the purchase of unlawful pleasures, envy of those whose vices he could not reach to and calumnious murmuring against the pious, gluttonous enjoyment of food, the dull glowering anger amid which he brooded upon his longing, the swamp of spiritual and bodily sloth in which his whole being had sunk.

Perhaps it would be more fruitful to contemplate how a person who brags about “grabbing pussies” (lust) and gorges on so much fast food that his ass has reached Kardashian proportions (gluttony), who is too lazy (sloth) to oversee a smooth transition into the most powerful office in the world and leaves it to Paul Ryan to come up with a health care plan rather than come up with his own, who is so greedy (avarice) that he stiffs contractors and would rather violate the emolument clause than divest from his financial empire, how a person who is constantly raging (anger) at perceived enemies, who so envies (covetousness) the crowd size of his predecessor’s Inauguration that he squanders his first week of his presidency making a fool out of himself for engaging in easily refuted lying, how a person whose overweening pride (hubris) makes Milton’s Satan and Macbeth and Lear seem like the Dalai Lama in comparison, how a person like Donald Trump could ever be elected President of the United States of America.

And so what have I left out? His tastelessness. His residency in Trump Tower out Liberaces Liberace in its rococo extravagance. Imagine spending a weekend locked in Trump’s glittering bordello (see top picture) without flinging yourself out one of its windows?

Anyway, as the speaker in Springsteen’s “Thunder Road” puts it, “I’m no hero. That’s understood,” so I leave it to someone else to take on the task of providing us with a comprehensive list of Trump’s character flaws.