Yesterday morning I awakened to the news that the 1,001st mass shooting since Sandy Hook had occurred at an Orlando nightclub.   Of course, mass shootings only make up a small percentage of the 32,000 firearms deaths the US racks up every year.

Be that as it may, when it comes to mass shootings, a very clear pattern emerges as to the weapon of choice among the assailants, the AR-15, the weapon used Friday night in Orlando and six months ago in San Bernardino and in 2012 in both the Aurora, Colorado, theatre shooting and the massacre in Newton, Connecticut, at the Sandy Hook Elementary School.

It’s the same weapon South Carolina State legislator Lee Bright raffled off when he ran against Lindsey Graham in 2014. I’ll let the ironically named legislator speak for himself:

“In the wake of the horrific tragedy in Newtown, Connecticut, gun-grabbers were sure they had the votes to RAM gun control into law,” the email said. “Thanks to the action of Second Amendment supporters all over the country, their schemed failed — even despite my Republican Primary opponent, U.S. Senator Lindsey Graham. … In fact, it’s one BIG reason I’m running for the U.S. Senate. And today, I’m announcing that my campaign is giving away a brand new Palmetto Armory AR-15!”

Bright asked supporters to forward the email “to every pro-gun friend and family member you have.”

There is no reason for anyone to own an AR-15 assault weapon (note the nomenclature). For hunting, it might be useful if the game is Godzilla, but for deer or even bear it seems like overkill, not very sporting, and as far as self-protection goes, a shotgun will do.

And please spare me the deluded fantasy that assault weapons are necessary in the event that “they” ever come after “our guns.” Let me assure you that if the “they” is the US Military, your AR-15 is not going to be all that effective against F-15s, armored vehicles, cruise missiles, etc.

But, the doubters ask, if we make assault weapons illegal, only criminals will own them. Well, we have a real world example of what happens when assault weapons are banned in the 1996 legislation that Australia enacted. I quote the NY Times:

The oft-cited statistic in Australia is a simple one: There have been no mass killings — defined by experts there as a gunman killing five or more people besides himself — since the nation significantly tightened its gun control laws almost 20 years ago. 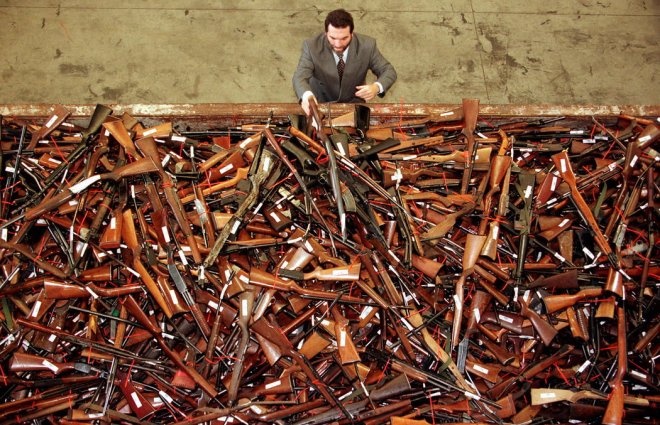 Obviously, it’s way past time for us to do the same. The fact that this latest butcher with a known link to an Islamic radical could purchase an assault weapon is unconscionable, ludicrous, downright un-Darwinian.