Years ago, I invited my former student, Paul Edward O’Brien, to introduce a unit on poetry to jaded high school seniors. It was springtime, and they were sick of school — sick of their childhoods. To most of them poetry was the language arts equivalent of a math problem.

Paul, an oncologist by profession and actor by avocation, majored in English at Harvard, taught freshman composition there during a sabbatical from med school, so he is a man of science and of letters. The old-fashioned word “dashing” does him justice, so I thought a swashbuckling evangelist for poetry might at least hold their attention. Maybe even convert one.

He began by quoting “Who Goes with Fergus” and explained how he fell in love with the poem without even having any idea what it meant. He told the students at one point that “Poetry can be your friend, your companion, help you in times of need.”

Last Monday, with about three-and-a-half hours of sleep and feeling something very close to despair, I stumbled into my first period class of sophomores to discuss John Keats’s “Ode to a Nightingale.” The poem had been slated for this day on my syllabus before I had received some very disturbing news, and it’s not necessarily a poem I would choose to teach right now given what is going on in my life.

I started the class by asking students to close their eyes and for three minutes and attempt to remember vividly a time when they’d been blown away by nature – overawed by a breath-taking vista or a ferocious thunderstorm or an encounter with a wild animal. I asked them to try to conjure images – sights, sounds, smells and then to capture those images with words.

Once I saw that all their eyes were shut, I closed mine as well and thought of last summer when my wife Judy and I sat at a picnic table on top of Mount Mansfield in Vermont.

. . . behind us clouds rush over the summit, revealing a patch of blue sky. A waterfall of light pours through the opening and cascades down the side of the summit, progressively devouring shadows. Actually, the light’s more like lava because a waterfall is always pouring forth, but this light is creeping, shimmering its way down, illuminating boulders and green growth . , ,

Instead of reading their responses, they shared them orally. One, nighttime in Oxford, England, green-green-green night grass and a profusion of stars. Another, atop a mountain with fog blanketing below, except for a rectangular opening, like a window, through which he could see the sloping vegetation below. A third, the sound of water rushing over river rocks during a night of utter solitude.

I asked them to articulate their emotional responses. Virtually everyone agreed egos tended to disappear in the face of their experiences. No one thought, “How cool that I’m experiencing these wonders,” but the wonders themselves took precedence over the perceiver.

I tied their experiences to Romanticism and explained in the ode Keats is trying to escape his anguish via nature and imagination.

We then turned to the poem itself, that beautiful meditation on death, suffering, attempted escape, the failure of the imagination, among other things.

I’ve given up having students read poems out loud in class; I read them myself for the sake of fluidity.

So I started the first stanza, and as I did, sunlight flickered across the page underscoring, as it were, the delicacy of the verse, the ephemera of poor Keats’s rapidly disappearing days. I tried to keep my voice steady.

My heart aches, and a drowsy numbness pains

My sense, as though of hemlock I had drunk,

Or emptied some dull opiate to the drains

One minute past, and Lethe-wards had sunk:

‘Tis not through envy of thy happy lot,

But being too happy in thine happiness,—

That thou, light-winged Dryad of the trees

In some melodious plot

Of beechen green, and shadows numberless,

Singest of summer in full-throated ease.

Keats was suffering from depression. His beloved brother Tom had died of TB the summer before, and TB’s first symptoms were beginning to manifest themselves in him.

I asked the students to identify the tone using the first line: “aches” “numbness,” “pain.”

I had trouble with the third stanza in that I feared if I might start to weep.

Fade far away, dissolve, and quite forget

What thou among the leaves hast never known,

The weariness, the fever, and the fret

Here, where men sit and hear each other groan;

Where youth grows pale, and spectre-thin, and dies;

Where but to think is to be full of sorrow

Or new Love pine at them beyond to-morrow.

The sunlight flickering shadows from the trees outside the window upon the words of the poem was quite beautiful. 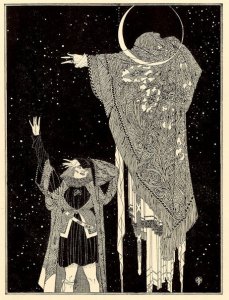 “Dissolve.” I recited Hamlet’s first soliloquy. “O would this too too solid flesh melt/And dissolve itself into a dew. . .” I explained Hamlet’s sad situation, his father’s death his mother’s marrying his uncle within a month.

This is true misery, I said; Hamlet and Keats long for vaporization, demolecularization, surcease of sorrow, absolute disappearance.

We discussed the slowness of the lines – the caesuras – how those commas make the reader hesitate, to limp along with “the weariness, the fever, and the fret” . . . where palsy shakes a few, sad, last gray hairs.”

The sunlight flickering on the page. The sound of my own voice reading the words.

I was not alone. I had the students, of course, but also Hamlet, Keats, those old immortal friends, to help me get through those miserable moments. No, not alone, and paradoxically, I felt keenly alive, felt something like joy by the time it was time to let them go. 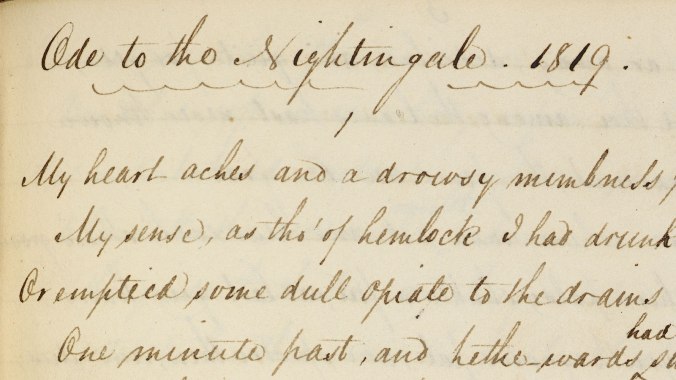 4 thoughts on “Keats to the Rescue”