Above and beyond the computer screen outside the closed window of my study, palmetto fronds and magnolia boughs shimmer in a sunny morning breeze. Seemingly, inside my computer, Robert Plant (and to a lesser degree Allison Krauss) is pleading for someone somewhere to “please read the letter [he/she] wrote.”

Some algorithm created by Steve Job’s brain trust has selected this song from a mix called Singer/Songwriter that shuffles music I have purchased. I happen not to like the song, nor that album. Critics convinced me to fork out ten bucks to buy it, so I did.  It’s not a big deal, but it has not made me happy. Perhaps the next song will better suit me, and as it turns out, it does, Joni Mitchell’s “Car on a Hill” from Court and Spark, an album I first purchased in 1974.

I think back to the Joni Mitchell concert I attended that year with Debbie Kellam with whom I was madly in love. Now Andrew Marvell is whispering in my ear: deserts of vast eternity.

In his History of Happiness, Darrin McMahon informs us:

Language reveals ancient definitions of happiness. It is a striking fact that in every Indo-European language, without exception, going all the way back to ancient Greek, the word for happiness is a cognate with the word for luck. Hap is the Old Norse and Old English root of happiness, and it just means luck or chance, as did the Old French heur, giving us bonheur, good fortune or happiness. German gives us the word Gluck, which to this day means both happiness and chance.

In other words, etymologically, happiness is happenstance, the luck of the draw, whether it it be a full house or the inherited brain chemistry that creates a naturally sunny disposition.

McMahon notes that the classical philosophers came to believe that happiness could be attained, not as feeling, but as a state earned through living a virtuous life, “measured,” as McMahon says, “in lifetimes, not moments.” Hence, happiness must be earned through the cultivation of virtues, which Malcolm catalogues for us in Macbeth:

In desert-born religions, the world becomes a vale of tears and ultimate happiness only possible in some exalted state, e.g., in prelapsarian Eden, i.e., the past, or in some future state, i.e., at the return of Christ in the millennium or in one of the many mansions of heaven.

Massah ain’t treating you right. Keep working. The low swinging chariot will be here any minute.

We work at our jobs
Collect our pay
Believe we’re gliding down the highway
When in fact we’re slip sliding away.

The Christian view described above provides a theoretical escape hatch for Simon’s paradox, but left-brained Enlightened philosophers and Founding Fathers supplanted that view and argued that happiness was, again in McMahon’s words, “more than a divine gift, less fortuitous than fortune, less exalted than a millenarian dream.” In fact, it is an American right to pursue it, and God knows we do. 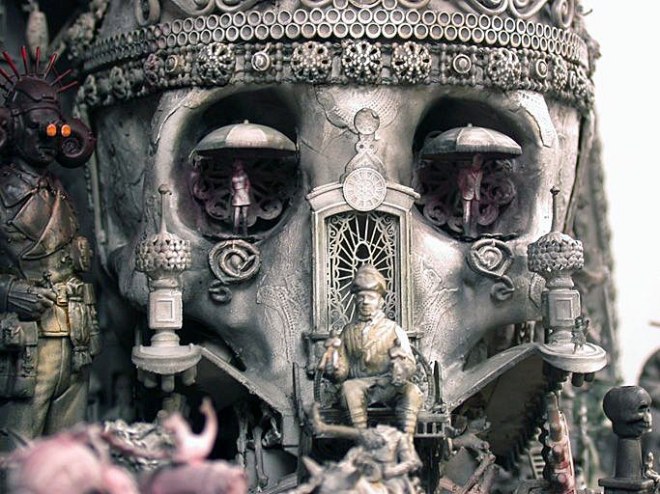 detail from The Palace of Hedonism by Kris Kuksi

God bless the Enlightenment! It has taught us that sensuality is not sin, that we deserve happiness because we are, and rather than donning hair shirts and spending our winter nights barefooted in the snow self-flagellating, we should make the best out of a sure thing, the here and now, for, yes, death is just around the corner. In fact, Lucretius, following the wisdom of Epicurus, argued 1600 earlier essentially the same concept.

However, happiness as a constant state is unsustainable in the flux of day-to-day occurrences, medications, moods, adrenal secretions. The classic philosophers and stoics were correct: True happiness is impossible without a foundation of compassion that directs one’s thoughts from the self to others.

Hap
BY THOMAS HARDY
If but some vengeful god would call to me
From up the sky, and laugh: “Thou suffering thing,
Know that thy sorrow is my ecstasy,
That thy love’s loss is my hate’s profiting!”

Then would I bear it, clench myself, and die,
Steeled by the sense of ire unmerited;
Half-eased in that a Powerfuller than I
Had willed and meted me the tears I shed.

But not so. How arrives it joy lies slain,
And why unblooms the best hope ever sown?
—Crass Casualty obstructs the sun and rain,
And dicing Time for gladness casts a moan. . . .
These purblind Doomsters had as readily strown
Blisses about my pilgrimage as pain.

detail from David’s The Death of Socrates