When aesthetes like Oscar Wilde or critics like Harold Bloom proclaim that “life imitates art” or “Shakespeare invented the human,” I imagine people rolling their eyes and thinking, “Puh-leez!”

Of course, their adopting these mannerisms confirms Wilde’s and Bloom’s claims. No doubt cinema popularized eye-rolling as a fetching way to express exasperated contempt, and “puh-leez” as in “give me a break,” probably can trace its origins from somewhere in Sitcomland.

What Wilde meant is that artists’ rendering of what they perceive provides the inartistic with images they project onto world, and in the case of characters from literature, models for imitation:

Consider [Wilde writes] the matter from a scientific or a metaphysical point of view, and you will find that I am right. For what is Nature? Nature is no great mother who has borne us. She is our creation. It is our brain that she quickens to life. Things are because we see them, and what we see, and how we see it, depends on the Arts that have influenced us. To look at a thing is very different from seeing a thing. One does not see anything until one sees its beauty. Then, and only then, does it come into existence. At present people see fogs, not because there are fogs, but because poets and painters have taught them the mysterious loveliness of such effects. There may have been fogs for centuries in London. I dare say there were. But no one saw them, and so we do not know anything about them. They did not exist until Art invented them. Now, it must be admitted, fogs are carried to excess. They have become the mere mannerism of a clique, and the exaggerated realism of their method give dull people bronchitis. Where the cultured catch an effect, the uncultured catch a cold.
“The Influence of the Impressionists on Climate”

To follow up on the second point, from the Renaissance on, literature has provided models for imitation for playgoers and readers eager to customize their personas. For example, males for 4+ centuries have channeled Hamlet, donned black and parroted his depressive wit; clever girls, in turn, have modeled their personalities on Elizabeth Bennet, that arch, articulate social critic. Perhaps the most copied “type” for males of my generation is the Hemingway code hero. Nick Adams and Jake Barnes wannabes around the world have embraced wounded, stoic, epicureanism for going on a century. On a less grandiose scale, Bogart as Sam Spade, John Wayne as, well, John Wayne, and Aubrey Hepburn as Holly Golightly have also offered archetypes for imitation.

Come to think of it, perhaps exotic Papa Hemingway deserves some praise/blame for our current culinary obsessions.

“As I ate the oysters with their strong taste of the sea and their faint metallic taste that the cold white wine washed away, leaving only the sea taste and the succulent texture, and as I drank their cold liquid from each shell and washed it down with the crisp taste of the wine, I lost the empty feeling and began to be happy, and to make plans.”
A Moveable Feast 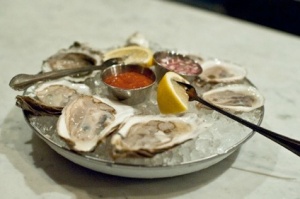 In the late Victorian era, the aestheticism of Pater and Wilde reeked of decadence. Who could take Pater’s advice “[t]o burn always with this hard gemlike flame, to maintain this ecstasy” if employed as a grocery boy, seamstress, coal miner, or pedagogue?

No, you had to loll your days away reading the “Rubaiyat of Omar Khayyam” in exquisitely decorated gardenia-scented rooms (while across town some tailor pricked his finger hand crafting the smoking jacket you had commissioned).

Hidden by the Sleeve of Night and Morn by Edmund Dulac

Nowadays, few folk perceive decoration as decadent, though decorators have been conspicuously gay, as have been hair-dressers, fashion designers, and at least nowadays on King Street, male salesclerks in clothing stores. The effeminacy of caring about what flowers to place where perhaps only occurs in Late Empire cultures. (I don’t see Dan Boone fussing over container of black-eyed susans). And, yes, many grandsons of D-Day GIs are now uncloseted metrosexuals, and I say this is a good thing.

So, excuse me as I slip down to to snip some begonias from the garden. We might disagree about what is beautiful, but we can all agree that beauty beats its alternatives.