With the specter of terrorism, both domestic and jihadist, haunting contemporary life, it’s no wonder that yesterday’s annual Folly Beach, SC, Christmas parade seemed somewhat subdued. For example, no eardrum-shattering Shriner-produced gun battles “betwixt” Revenuers and Moonshiners terrified toddlers. Instead, we baby boomers were treated to this rather melancholy spectacle.

[For those not proficient in Southern US English, here’s a translation: “This gentleman right here is 91-years-old, still working for the burned and crippled children (not the burning crippled children)].

Compare that to this scene from four years ago when all the little Masons and Benningtons were treated to some semi-authentic street drama, a Western tradition dating back to the glorious days of the Hundred Years War and the bubonic plague.

Also conspicuous in their absence were the vintage car clubs, those MG-Bs, Triumph Spitfires, XKE Jags that ascot-wearing playboys used to tool around the countryside in with their scarf-headed mistresses headed to the Timberland Inn for a mid-afternoon tryst.

And, for me, an owner of two late departed VW microbuses, what a disappointment that nary a one puttered past belching clouds of oil-laden exhaust (as opposed to in years past when they appeared in abundance, transforming Center Street into a miniature Beijing).

Nor did the Surf Rider drill team wow us with their shenanigans. 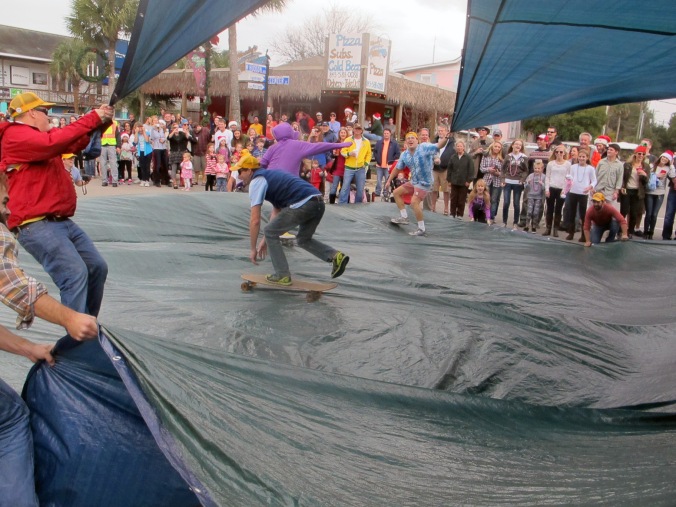 Not that the parade was a complete bust. The James Island band was in fine form.

Plus, the Roller Derby girls are always a welcome addition.

Of course, Santa appeared, albeit with an armed guard:

And, of course, the after-party at Chico Feo never disappoints. Check out these not-exactly vestal virgins preparing to sacrifice this cloven-footed beast to Jah so Mr. Weed back in the kitchen can whip up some of his world class curried goat.

And as Solstice present to all of you wherever you be, a rare photograph of your humble narrator at Chico Feo with his bodyguards. 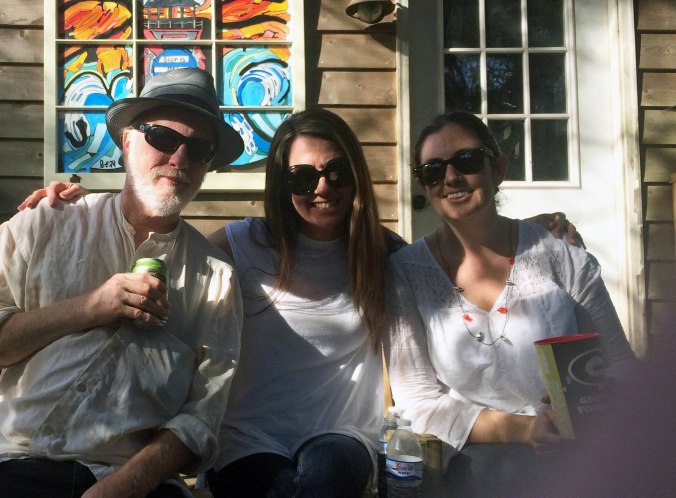