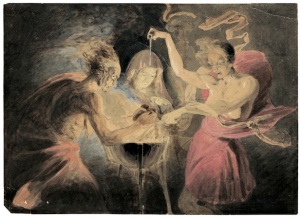 In the Brit Lit high school survey course I teach, around Halloween we do Macbeth with its witches, shrieking owls, and rooky woods. I’m fortunate enough to have available a projector and stream-able copies of Orson Welles’ 1948 movie, the 1979 Trevor Nunn PBS production, and the more recent 2010 Rupert Gould Great Performances movie starring Patrick Stewart and Kate Fleetwood. Alas, we don’t possess Polanski’s psychedelic 1971 Macbeth, but you can cop clips from YouTube. Anyway, I thought I’d share my approach as an offering to novice teachers because even though I’ve been in the business for thirty plus years, I still remember all too well not having a clue that first year as I improvised my way through my classes without a scrap of sheet music.

And believe me, brothers and sisters, I ain’t no Miles Davis, not by a long shot.

Anyway, here’s what I do.

In the 8th and 9th grades, students have read Romeo and Juliet and Julius Caesar, so they’re already hip to triangular plots and blank verse.

Before the first reading assignment, I offer a bit of background: The Queen is dead, James has arrived — he who has written a book on witches — and, oh yeah, Guy Fawkes has just attempted to pull a 9/11 on the British Parliament. Thanks to both our excellent history department and V for Vendetta, most of my students are hip to the 5th of November. In short, the dark clouds of the Jacobean Period have blotted out the Elizabethan sun.

To whet their appetite, on the day I assign the first reading, I show them the Polanski version of 1.1.

Of course, there’s a lot to discuss: language, paradox, the nature of evil, patriarchal views of women, dramaturgy, cinematography.

Day 1 (45 minutes): The next day, after a reading quiz[2], perhaps over accentuating an iamb here or there, I read aloud the wounded Sergeant’s recap of Macbeth and Banquo’s battles.

Once we’re all on the same page action-wise, I mention paradoxes, a major motif. I tell them that every time I run across a paradox, I’m going to make the ah-ooh-ga submarine sound. Over the course of the play, clever students chime in with their own ah-ooh-gas, and whenever a paradox appears, I see most of the other students writing in the books (which they own).

I pick up the action with “Scene 3” “Enter Macbeth and Banquo” and ask for volunteers to read the various parts. Sometimes, I stop a reader and ask, “Can you hear the iambs marching?” I do so throughout the entire play whenever I think the meter is especially worth noting.

Of course, during 1.3 the ah-ooh-gas come fast and furious.

I try to elicit via Socratic questioning the thematic implications of the twinning of “foul” and “fair.”

Then I introduce the “garment motif” and employ the sound of Parisian siren to signal when garment images occur.

I ask for new reading volunteers and have then start with [Enter Ross].

From there, I read Duncan’s “There’s no art/To find the mind’s construction in the face./He was gentleman on whom I built/An absolute trust.”

“What are the next two lines of the play?” I ask.

Their homework is to finish reading Act 1.

The last motif I distinguish with sound effects is darkness, which is signaled by a melodramatic bum-bum-bum-BUM, the clichéd tension builder of many a bad movie.

We begin by talking about Lady Macbeth’s character, what various critics have to say, and jump to her “unsex me” speech, which I read.

I then have a female read the “Oh, never/Shall sun that morrow see” speech.

I then ask the students to reread Macbeth’s soliloquy, show them Ian McKellen’s rendition, and we dissect the soliloquy.

We end the class with a screening of Dame Judi and Sir Ian bringing the Act 1 to a close.

Assignment: read all of Act 2.

I break the students into groups of three and have them “story board” the “Is this a dagger I see” speech. I encourage them to visualize the scene and then to create 15 to 20 panels depicting how they would choreograph the action providing quotes on the panel. Then we reconvene as a class, and the students present their visions. Here are a view examples from this year. 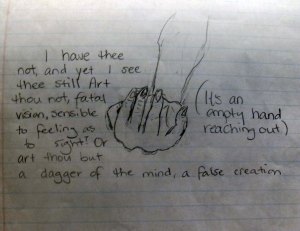 After the presentations, I show then Orson Welles’, Roman Polanski’s, Trevor Nunn’s, and Rupert Gould’s renditions of the scene.

I have students read 2.2 aloud, and we discuss Macbeth’s and Lady Macbeth’s post-murder behavior, especially noting the dichotomy between bloody hands making “the multitudinous seas incarnadine” and a “little water” clearing them of the deed.

They’re familiar with comic relief, and I skip the Porter’s monologue and head straight into the dialogue with Macduff, pointing out that essentially it’s a “penis joke.”

(At the end of the Macbeth unit, we watch the entire Gould/Patrick Stewart film, which transforms the Porter scene into a heightening of tension as he obscenely spits out the jokes in front of Lady Macduff and her children).

We don’t spend much time on the rest of the scene, but I do highlight the irony inherit in Macbeth’s “Had I but died an hour before this chance” speech.

After the students are clear on plot info – the somewhat confusing murdering of the grooms, the flight of Malcolm and Donaldbain — we shift to Act 3.

I draw a triangle on the board with Act 3 at the apex. We use Aristotle’s term “peripetia” instead “climax,” and I ask them about the turning points of Romeo and Juliet and Julius Caesar. We draw rising action parallels among the R & J’s marriage, Caesar’s assassination, and Duncan’s murder.

I read the “To be thus is nothing soliloquy,” and we discuss it. 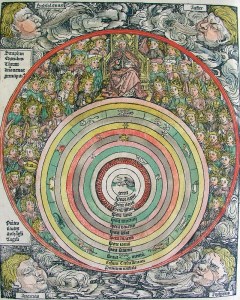 I don’t spend much time on the murderers but do point out that the canine catalogue reflects the Chain of Being concept so near and dear to the English back then.

Rather than analyzing the banquet scene, I show them Nunn’s version. I do a little stand-up, depicting the scene in modern terms using whoever is President as Macbeth (Reagan was my first victim; Hillary will be my last)[3].

Class ends with the “blood will have blood speech.”

Day 5 (45 minutes): Although my students are rhythmically challenged, we attempt a hip hop reading of “double double toil and trouble.”

Despite it’s full-frontal geriatric nudity, I show them Polanski’s version and then Nunn’s.

That leaves the butchering of the Macduff family.

While I’m critiquing rough drafts, I assign students speeches to paraphrase: Malcolm’s “I grant him bloody,” Malcolm’s “With this there grows,’ Malcolm’s “But I have none,” and Macduff’s “Fit to govern,” and Malcolm’s “Child of integrity.”

In paraphrasing, I ask students to provide 3 alternatives for every significant word, e.g., “sudden” might be rendered “impulsive, spasmodic, non-reflective.”

I hand back their rough drafts, and we look closely at the speeches.

We end the class with Ross’s entrance and the delivery of his horrid news.

I show them Nunn’s rendition of 5.1 featuring Judi Dench’s blood-curdling shriekscream, certainly the greatest scream in the history of “moving pictures.’

We discuss the play in the context of tragedy, the dissolution of Macbeth as a human, the metathesis of his sinning, the moral implications.

We view the Gould/Stewart/Fleetwood film in its entirety, stopping the action whenever necessary for commentary. This full viewing, of course, is time-consuming, but these students face a very demanding test, and seeing the complete play performed I think is crucial.  It is, after all, great art.

Of course, if you plan using any of this, you’ll need to adjust it according to your students and schedules, and in my case, the days have not necessarily been consecutive. For example, a day of Wordly Wise vocabulary might be utilized to align an 85-minute class.

It’s up to you to pull it all together in discussion.

At any rate, keep fighting the good fight.

[1] Note, our classes meet three times a week for 45 minutes and once for 85 minutes.

[2] These reading quizzes are frequent, one for virtually every assignment.

One thought on “Teaching Macbeth”