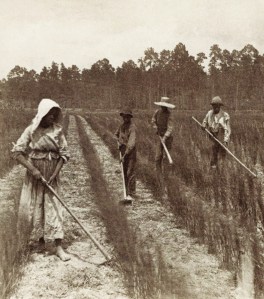 When I was growing up in South Carolina in the ‘50s and ‘60s, the Confederate Battle flag represented for me “the Lost Cause,” that noble, heroic, and tragic conflict fought to ensure that states had the right to govern themselves. My home state had led the way and seceded from the Union rather than suffer the indignity of having others – foreigners from New York or Ohio — impose their views and tariffs upon its sovereignty.

States Rights as the War’s rationale had been preached to me by my father and reinforced in the South Carolina history courses I took in the third and eighth grades. Those textbooks claimed that economic sanctions, not slavery, had ignited the tinderbox, and although a few bad apples taint every barrel, the vast majority of slaveowners were benign ladies and gentleman who loved Mammy and Uncle Remus. And if you doubted these truths, you could watch Gone with the Wind to see for yourself how positively symbiotic the relationship between whites and blacks had been.

So when the South Carolina began to celebrate the War’s centennial, 9-year-old-me was happy to see the Battle Flag hoisted upon the dome of the Capitol beneath Old Glory and our distinctive state flag with its palmetto and crescent moon. It didn’t occur to me that the Confederate flag’s presence had anything to do with the Civil Rights movement, and even it it had, I probably wouldn’t have cared. After all, wasn’t the Civil Rights movement a replay of the war, outsiders imposing their wills on us?

Flash forward a half a century, and guess what, I’ve learned a thing or two. For example, I’ve read the Declarations of Secession of the Confederate states. Here’ are the first two paragraphs of Mississippi’s:

In the momentous step, which our State has taken of dissolving its connection with the government of which we so long formed a part, it is but just that we should declare the prominent reasons which have induced our course.

Our position is thoroughly identified with the institution of slavery – the greatest material interest of the world. Its labor supplies the product, which constitutes by far the largest and most important portions of commerce of the earth. These products are peculiar to the climate verging on the tropical regions, and by an imperious law of nature, none but the black race can bear exposure to the tropical sun. These products have become necessities of the world, and a blow at slavery is a blow at commerce and civilization. That blow has been long aimed at the institution, and was at the point of reaching its consummation. There was no choice left us but submission to the mandates of abolition, or a dissolution of the Union, whose principles had been subverted to work out our ruin.

So much for trade tariffs being the cause of the war, and if indeed, slavery is the reason the South seceded, then doesn’t it follow that the Lost Cause was evil? Here’s Robert E Lee on the subject:

So far from engaging in a war to perpetuate slavery, I am rejoiced that slavery is abolished. I believe it will be greatly for the interests of the South. So fully am I satisfied of this, as regards Virginia especially, that I would cheerfully have lost all I have lost by the war, and have suffered all I have suffered, to have this object attained.

As someone who teaches literature, I’ve also learned a thing or two about symbols, that they must be interpreted within their contexts  — white Moby Dick doesn’t symbolize purity. e.g.  It follows that symbols’ meanings change as their historical contexts change.

For example, as The Jewish Visual Library points out,

Throughout its history, the swastika represented life, sun, power, strength and good luck. In the early 20th century, it was still considered a positive symbol. During World War I, it was found on shoulder patches of members of the American 45th Division and the Finnish air force. Only after the Nazi period did its connotation change.

In the USA, you have the existential right to maintain that the original symbolism of the swastika is its true meaning, but if you decide to wear one as a lapel pin, you’re likely to be frowned upon.

Now when I see the Battle Flag, I think of Lester Maddox or George Wallace or Dylann Roof, not of Robert E Lee. As Allan Gurganus put it in a NY Times editorial in 1996, “the forces of hatred have co-opted [the flag].” Or to quote my friend and former student David Connor Jones, “I find it odd that all my erudite southern friends who still defend the flag do not have the decal on their cars, much less fly it at their homes. Why do you think that is?” 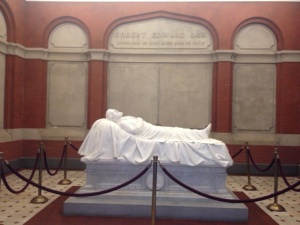 In another editorial appearing in the Roanoke Times last July, David Cox, former rector of RE Lee Memorial Church in Lexington, writes about Washington and Lee University’s removal of Confederate flags from its chapel:

Confederate battle flags, or their replicas, surrounded the statue [of Robert E Lee] from 1930 until last week, when the university removed them. To me, their absence pays more homage to the memory of its most famous president than their presence. Judging from the thousands of his letters I’ve read in exploring his faith, for all his deeds, heritage and acclaim (and animosity) accorded him, Robert Edward Lee was at heart a humble soul striving to do his duty to his God and his country. Those flags didn’t fit the person who came to Lexington in 1865.

He also adds, “Someone wrote me of a woman asking Lee what to do with an old battle flag. Lee supposedly responded, ‘Fold it up and put it away.’ Though I’ve not verified the account, it is consistent with his letters and acts of his last years. He was always looking ahead.”

Let’s follow General Lee’s example and remove the flag from the State House grounds so we can turn our attention to more meaty matters — like gun control.

11 thoughts on “Way Past Time”