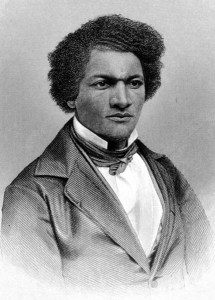 A former housemate of mine, James Paul Rice, has a historical novel coming out next year based on the 1822 Denmark Vesey uprising. Being a native of the Lowcountry of South Carolina, I was somewhat familiar with Denmark Vesey, but he came absolutely alive for me as I read Mr. Rice’s novel in manuscript.  Several pivotal scenes from the novel are set at the Emanuel African Methodist Episcopal Church, which Vesey helped to found in 1816.

It is at this church that last night’s horrific mass murders took place. The alleged murderer, Dylann (sic) Root, can be seen in a photograph wearing a jacket with two white supremacist patches, one from South Africa and the other from Rhodesia. Is it possible that the Vesey connection played a role in Root’s selection of settings? After all, he’s from Columbia, which has a number of more conveniently located AME churches. Why drive all the way down to Charleston?  Did Root choose Emanuel because of its historical significance? Its connection with not only Vesey but with the Civil Rights movement?  Did he know that Dr. King had preached there?

I can’t help but think of Cass Mastern’s “spider web” theory from Robert Penn Warren’s  All the King’s Men – his theory about the karmic connections of events through time:

[Mastern] learned that the world is like an enormous spider web and if you touch it however lightly, at any point, the vibration ripples to the remotest perimeter and the drowsy spider feels the tingle and is drowsy no more but springs out to fling the gossamer coils about you who have touched the web and then inject the black, numbing poison under your hide. It does not matter whether or not you meant to brush the web of things. Your happy foot or your gay wing may have brushed it ever so lightly, but what happens always happens and there is the spider, bearded black and with his great faceted eyes glittering like mirrors in the sun, or like God’s eye, and the fangs dripping. 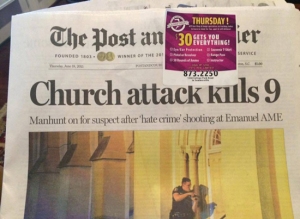 Of course, I’m merely speculating, and it doesn’t ultimately matter. Nine God-fearing people are dead because of the pigmentation of their skin. Another young white male starved for attention has gotten it in the worst way. The Confederate battle flag is flying on our State House grounds at full staff as I type this and will continue to fly for another generation or two. In the foreseeable future, assault weapons will still be easier to obtain than driver’s permits. In fact, the awful headline in this morning’s Charleston paper was somewhat obscured by an advertising sticker from a gun shop. Intemperate souls will suggest that the worshippers should have been packing heat, and if that’s what it’s come to here, that grandmothers cannot go to church unarmed, then “American” can no longer be used as an adjective for civilization.

No, let me end with another quote from All the King’s Men:

After a great blow, or crisis, after the first shock and then after the nerves have stopped screaming and twitching, you settle down to the new condition of things and feel that all possibility of change has been used up. You adjust yourself, and are sure that the new equilibrium is for eternity. . . But if anything is certain it is that no story is ever over, for the story which we think is over is only a chapter in a story which will not be over, and it isn’t the game that is over, it is just an inning, and that game has a lot more than nine innings. When the game stops it will be called on account of darkness. But it is a long day.

One thought on “Idle Speculation”