1. Resolve not to visit North Korea.

Not only will you save a couple of grand, but you also can avoid the possibility of being arrested and thrown into a prison that makes Kafka’s Penal Colony seem like Club Med in comparison.

2. Refrain from making that donation to Pat Robertson’s Regent University.

These quotes from its founder suggest that your educational donations might be better spent elsewhere:

“The feminist agenda is not about equal rights for women. It is about a socialist, anti-family political movement that encourages women to leave their husbands, kill their children, practice witchcraft, destroy capitalism and become lesbians.”

“Just like what Nazi Germany did to the Jews, so liberal America is now doing to the evangelical Christians! It’s no different! It is the same thing! It is happening all over again! It is the Democratic Congress, the liberal-based media and the homosexuals who want to destroy the Christians! Wholesale abuse and discrimination and the worst bigotry directed toward any group in America today! More terrible than anything suffered by any minority in history! … And it is happening here and now! Same thing, but directed against Christians by the liberal government and media! Send money today or these liberals will be putting Christians like you and me in concentration camps!”

3. Don’t beat up on yourself for eating poorly, drinking too much, and frittering your life away on Facebook.

Masochism is an even uglier bad habit.

4. Promise yourself to quit mowing your lawn. 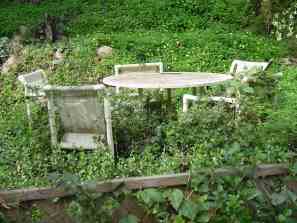 Your lawn makes you into a bad citizen of Planet Earth. If you pour water on a driveway and measure how much runs off compared to how much soaks in and replenishes soil moisture, and then do the same test on a mowed lawn, you’ll find that lawns don’t hold water much better than driveways do. That means the free water you get from rain is mostly wasted, because most of it runs off instead of soaking into the ground where plants can use it. It also means that all the rain and sprinkler water that runs off your lawn carries anything that’s on the lawn with it into storm sewers and ditches and eventually into lakes and rivers. That includes fertilizers which cause algae to clog rivers and lakes, insecticides which kill fish and the insects they feed on, and weed-killers that are harmful to animals and kill aquatic plants that many animals depend on. Even if you don’t fertilize your lawn, the runoff contains nutrients from decaying leaves and grass clippings which will cause algae blooms in lakes and rivers.

In other words, quit being a selfish bastard and recycle that lawnmower.

5. And finally, don’t make any resolutions that you’re fairly sure you’ll fail to keep, e.g., resolving to sit in the full lotus position under a bodhi tree until you discover the meaning of existence. I tried that last year and was done in about the time that your typical NFL wide receiver covers 100 yards.