Today I ran across yet another article describing an intrepid literalist’s quixotic quest to discover proof that Noah’s voyage was historic rather than mythic. Of course, from my point of view (post-post Enlightenment Modernistic Existential Groucho-Marxian) scouring Mount Ararat for splinters from Noah’s Ark makes about as much sense as sending deep sea divers into the South Pacific in an attempt to recover Captain Ahab’s ivory leg.

The article features protagonist Porcher Taylor, “a professor of paralegal studies in the School of Professional and Continuing Studies at the University of Richmond.”

“The cognitive genesis of my journey began in 1973, some 41 years ago, in my junior year as a cadet at West Point.” [Taylor] told Space.com. Back then, Taylor came across “credible rumors” ricocheting off the walls of the academy that a CIA spy satellite had accidentally imaged “what appeared to be the bow of a ship sticking up out of the ice cap on Mt. Ararat,” Taylor said.

(As it turns out, I, too, was an undergraduate in 1973, some 41 years ago, but, of course, no CIA rumors ever ricocheted in my circles because, as many of you know, “Rasta don’t work for no CIA.”)

At any rate, in addition to immersing himself in the esotericism of paralegal studies, Taylor has devoted much time and energy in a crusade to declassify “five 1949 US Air Force aerial photos of Mt. Ararat.” In addition, “thanks to Taylor’s invitations,” a number of experts over the years have “performed analyses of the satellite imagery” of the site. This analysis, Taylor says, has “thankfully tempered my zeal as an amateur.” The image of what Taylor contends are the remains of Noah’s Ark is now known as “Ararat Anomaly.”

As it turns out, Taylor is only one of a long line of literalists seeking scientific proof of the Ark’s existence. According to The Daily Mail in April of 2010 (some four years ago), Yeung Wing-cheung, one of a “15-strong team of fundamental Christians exploring the Turkish mountain” declared of the wood he had supposedly discovered on Ararat, “It’s not 100 percent it’s Noah’s Ark, but we think that 99.9 per cent that it is.”

Now, I’m not going to waste your or my valuable time debunking the ridiculous concept that a post-agrarian Middle Easterner gathered a male and female of all the animals on the globe; however, I am going to suggest something that these literalists seem incapable of grasping: If the Noah narrative is literally true, then the deity they worship makes Hitler and Stalin seem benign in comparison, and proof that the Noah story is literally true would do grave damage to the concept that “God is Love.”

For if we actually look at Genesis 6.6-7, we learn that a disconcertedly un-omniscient, unstable Lord “was sorry that He had made man on the earth, and He was grieved in His Heart. So the Lord said, ‘I will destroy man whom I have created from the face of the earth, both man and beast, creeping thing and birds of the air, [not to mention innocent infants and adorable puppies], for I am sorry I made them.'”

Of course, he has a change of heart and tasks Noah with the [forgive me] Herculean labor of building the vessel. Nevertheless, he dooms the rest of his creation to a horrific death, a decimation that goes beyond your typical “ethnic cleansing.”

How do you reconcile that with “God is Love?”

So I say let’s call a myth a myth and let sleeping arks lie. 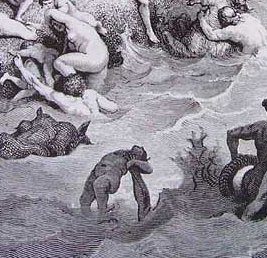