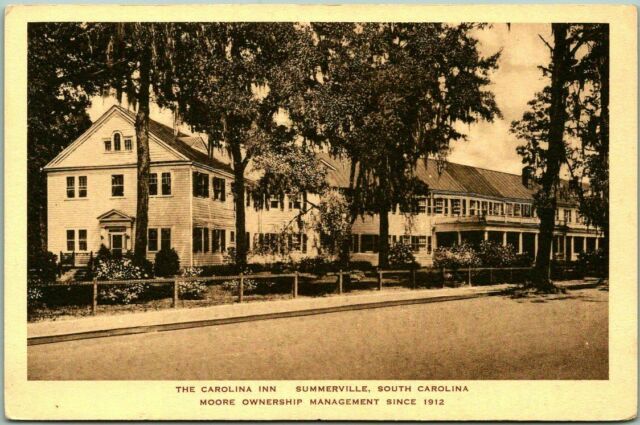 Old Carolina Inn, the first building in Summerville to have an elevator

Before the fast food franchises, before the Wal-Marts, before the sprawl, my hometown Summerville, SC, was a lovely, quiet village nestled in a pine forest 25 miles northwest of Charleston.  Settled just after the Revolutionary War and originally known as Pineland Village, the community in those days offered a haven for plantation owners seeking seasonal escape from malaria-bearing mosquitoes.

Eventually, Pineland Village became known as Summerville, and people started settling there year round. In 1847, Summerville officially became a municipality, and that very year the town council passed one of the first conservation laws in the nation, a statue forbidding cutting down trees of a certain circumference without permission. 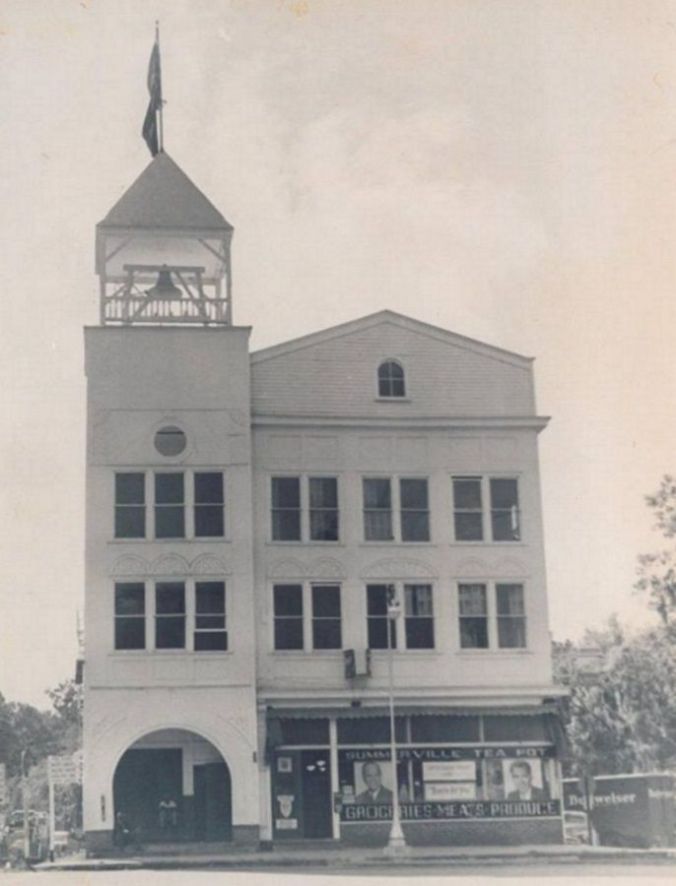 Town Hall back in the day

This passion for conservation and appreciation for the beauty of nature resulted in the planting of hundreds of azaleas, camellias, and gardenias throughout the town, both in its municipal parks and in the yards of the old clapboard whitewashed Victorian houses.  In the springtime, what is now called “the Old Village” or “the Historic District” has to rank as one of the most beautiful towns in the nation.  It claims as its official motto “Flowertown in the Pines.” 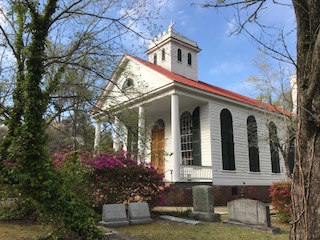 However, in the old days, being a native and growing up “Flowertown” meant that everyone knew everyone else, which was a real disadvantage if you were a redhead like me.

“Did you recognize any of the boys?”

“No, but one of them was redheaded.”

“I bet it was Rusty Moore.  I’ll call his mother.”

Everyone in town knew everyone else, but outside of the town limits, there were a number of smaller unincorporated communities like Knightsville, which had its own elementary school, the Boone Hill community, Stallsville, New Hope, etc.  By junior high, children from these communities had matriculated in Summerville schools.  Unfortunately, a few of these rural children were dirt poor.  I remember shoeless White children hopping on the bus on the first day of school. We’re talking about the days of segregation when only a few handpicked African Americans had been integrated into our classes, and they were from downtown and academically talented.  Because academically, we were “tracked,” I rarely interacted with any of the disadvantaged kids from the rural areas, although I became good friends with several prosperous college prep kids from Knightsville.

However, when PE started in the 7th grade, I not only interacted with some of the disadvantaged rural kids, but I also showered with them, and since several had failed a year or two, some sported five o’clock shadows rather than peach fuzz.  PE  is where I first met Bobby Bosheen, the antagonist (and protagonist) of this piece.

My attempts to google Bobby Bosheen have turned up zilch.  I heard somewhere decades ago that he had been chained to a tree and bullwhipped and lost an eye.  Another rumor had him throwing a Hanahan boy off the Folly Pier and killing him in a tribal fight between rival high schools.  Although I doubt that either rumor is true, I don’t doubt that Bobby is no longer among the quick.  To say that he had anger issues is to say that Kanye West has ego issues.  Adjectives like volcanic and nuclear come to mind.  I would like to think that Bobby overcame his rage, that he turned out okay because deep down inside I don’t think he was a bad person.  He had this haunted look about him that suggested his childhood hadn’t taken place on Sunnybrook Farm.

For some odd reason, one Saturday, I let my friend, the late Gordon Wilson, talk me in going to Boone Hill Methodist Church to engage in unsupervised tackle football with the natives of that region.  Bobby was among the crew and had a jolly time swinging elbows, crushing ball carriers, and piling on.  Even though I enjoyed the game about as much as I would a root canal, I think my participation reaped the benefit of Bobby’s vaguely recognizing me and therefore not targeting me as an adversary.  True, he did punch me once as I was sitting in a car at the Curve-Inn Pool, but he was rip-roaring drunk and started fights that night with numerous revelers, including Kenny Reese, a popular basketball player.  The very next week I saw Bobby at Tastee Freeze, and Gordon asked him why he had punched me, and Bobby actually apologized, lamenting, “Whiskey and beer don’t mix.” 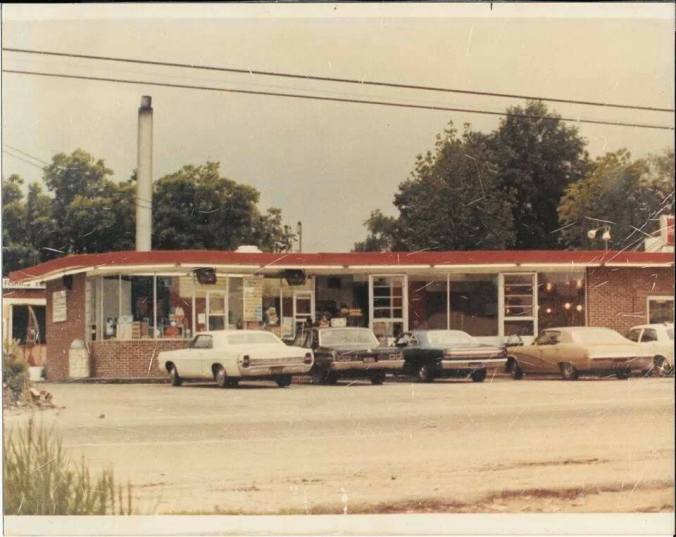 What really solidified my self-identification as a coward was Bobby’s girlfriend, a large, stringy haired bruiser with discolored teeth and the calves of a linebacker.  Unlike, Bobby, she hated me, hated me viscerally on sight. This was in ’70 or ’71, and I had started to grow my hair long and dress like Neil Young.  She used to position herself outside the entrance of the back of the main building and threaten me.  “I can’t wait to cut your ass, you red-headed bitch,” she said one day with arms crossed blocking the entrance. 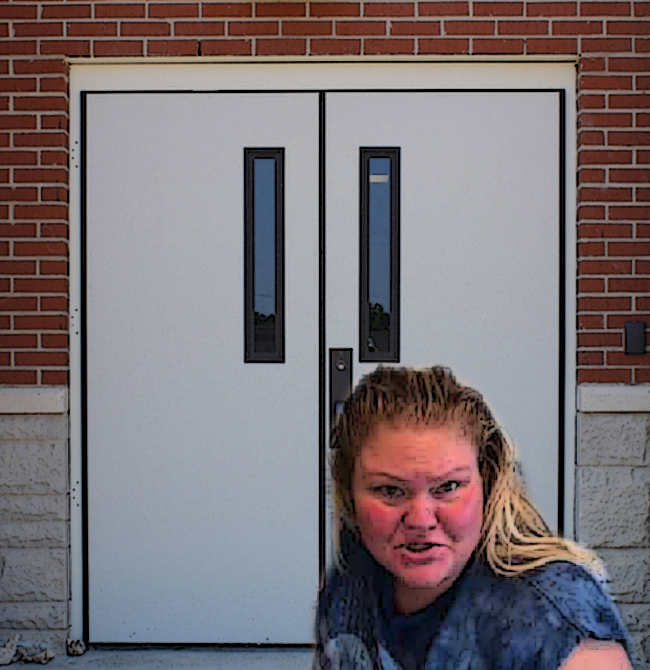 I suspected she could have, given that she outweighed me and I hadn’t been in a real fight since the fourth grade, so I turned tail and found another entryway.  Whenever I saw her, I avoided her.  She scared the shit out of me.

The last time I heard something concrete about Bobby was in ’75 when I was bumming a ride back to college with one of my mother’s colleagues, a teacher at Newington Elementary School.  As we passed Morris Knight’s, a beer joint, the husband of the teacher, a non-Summerville native, mentioned that he had made the mistake of going in there one time to shoot pool and had been assaulted and actually beaten with pool cues.  He told me that he had pressed charges against the assailant, who was convicted, but that he couldn’t remember his name, that is was something funny sounding.

Of course, Bobby’s anger had to come from somewhere.  I suspect at home he was no stranger to corporal punishment.  Perhaps, like Pee Wee Gaskins, he had been strung upside down naked and beaten with a two-by-four.  If he had been born to one of the families living on Carolina Avenue in a Victorian house with a spacious porch beneath moss draped live oaks among the azaleas, I suspect he and the rest of the world would have gotten along much better. 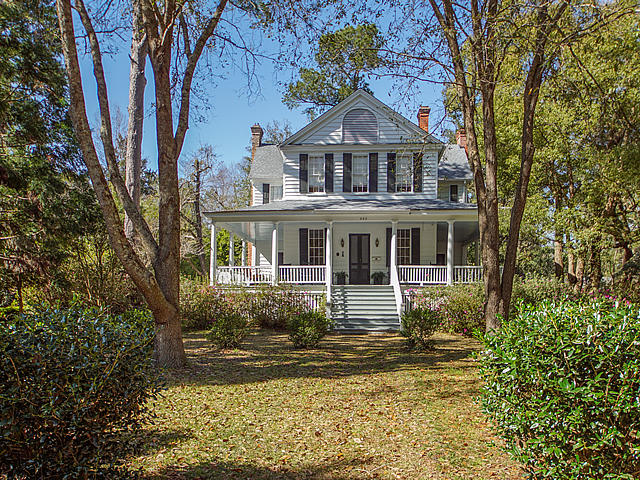