“Well, I try not to hope for too much [. . .] It puts pressure on the future at my age.  If you know what I mean.  Sometimes a hope’ll slip in when I’m not paying attention [. . .] That I’ll die before my wife does, for instance.  Or something about my kids.  It’s pretty indistinct.”

It’s a bleak morning, the day before Thanksgiving. Last night on the side porch when I sensed a drop in temp, I boldly predicted that our tubby foppish weatherman Bill Walsh was wrong. The chill in the air meant that high pressure was pushing the dismal, life-negating, leaden, dripping sky turds out to sea and that we’d awake to blue skies and the possibility of the Moore/Birdsong nuclear family foursome enjoying a beer at my favorite meeting place, the open air bar known as Chico Feo, home of the $2 PBR, the $3 All Day IPA, home of homeless, Greg and Odie.

But I was wrong, and Bill was right. Today dawned — if you can even call it that — as bleak as ever — with low dark clouds scudding in the same direction as the river and a wind so strong it’s sloshing the water in the birdbath.

Despite the mournful weather, I’ve been enjoying the company of a very old friend, Frank Bascombe, the protagonist of what now are known as the “Frank Bascombe books” — The Sportswriter, Independence Day, The Lay of the Land, and Let Me Be Frank With You, the last a surprise gift from Judy Birdsong. 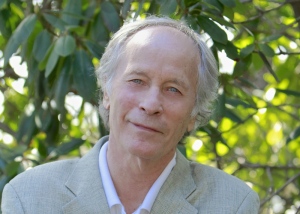 Although the phrase “Frank Bascombe Books” might suggest to the uninitiated tales of detection or spydom, these novels follow the quotidian life-journey of a once-promising fiction writer who turned to the easier craft of sportswriting but even abandoned that for the even easier money of real estate sales, at which he excelled. Their author, Richard Ford, like his protagonist, for a while worked as sportswriter, but praise be to whatever he didn’t give up fiction-writing for real estate. The second book in the Bascombe series, Independence Day, got him a Pulitzer and a Faulkner Pen award.

Now, in this latest book, a collection of four interrelated stories, Frank is 68, retired, and living in post-Sandy Haddam, New Jersey, a city name that conjures in the echo chamber of my juke-box-like mind Wallace Stevens’ great lines:

Why do you imagine golden birds?

Do you not see the blackbird

Walks around the feet

Of the women about you?

Frank Bascombe has taken Stevens’ advice about jettisoning the wanna-be for the what-is. He seeks to see things as they are, un-misted by sentiment. Here he is in the last story “The Death of Others” talking about simplifying his life:

Indeed for months now — and this may seem strange at my late moment in life (sixty-eight) — I’ve been trying to jettison as many friends as I can, and am frankly surprised more people don’t do it as a simple and practical means of achieving well-earned, late-in-the-game clarity. Lived life, especially once you hit adulthood, is always a matter of superfluity leading on to less-ness. Only (in my view) it’s a less-ness that’s as good as anything that’s happened before — plus it’s a lot easier.

In addition to paring down friendships, Frank is also eliminating certain words and phrases from his vocabulary, words that he believes “should no longer be usable – in speech or any form.” He continues, “Life’s a matter of gradual subtraction” and “a reserve of fewer, better words could help, I think, by setting an example for clearer thinking.”

Here are some of the words and phrases on the chopping block:

no problem (as a substitute for thank-you)

hydrate (when it means drink)

It’s been quite a pleasure growing old with Frank, who in The Sportswriter at 38 tried to overcome the death of his son Ralph by willing away irony but succumbed to what he calls dreaminess and the temptations of extra-marital embraces, which wrecks his marriage and to a lesser extent his writing career.

I’d call him a practical existentialist,* a nephew of good ol’ Binx Bolling from The Moviegoer. What I really love about Frank, though, is his voice, his way with words, how he expresses what I sometimes think so much better than I ever could, for example this description of a mealy-mouthed preacher — “Fike’s morning devotionals all have the tickle-your-funny-bone, cloyingly Christian pseudo-irreverence calculated to make God Almighty as just one of the boys” or this description of searing pain: “my neck had started zapping me, and I’d begun feeling the first burning-needles-prickle-stabs in the soles of my feet, sensations that now [. . .] had travelled all the way up my groinal nexus and begun shooting Apache Arrows into my poor helpless rectum.”

Alas, I’m afraid this book may be the last we hear from Frank, another notable subtraction from the subtractions that old age brings.

If so, so long, pal. It’s been great knowing you.

*I don’t look in mirrors anymore. It’s cheaper than surgery.