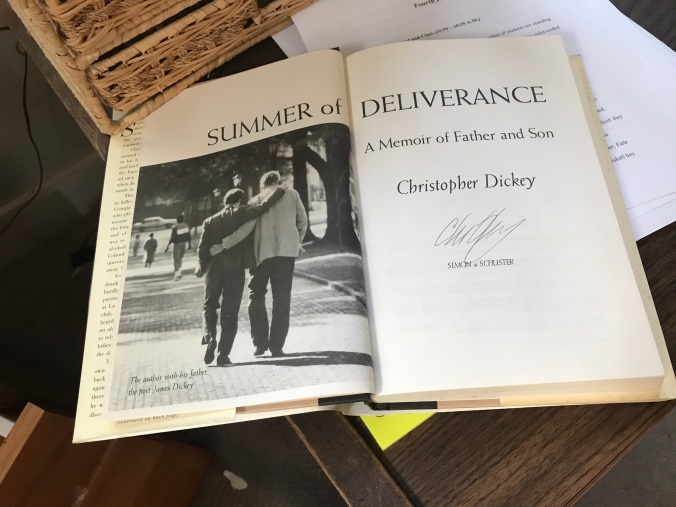 My copy of Chris’s memoir

Alas, I never met the journalist Christopher Dickey, son of the famous poet, in person.

Chris himself was most famous to non-readers for reporting live from the Paris tunnel where Lady Di and Hasnat Khan perished in that horrendous car crash, his voice describing the scene over the unceasing Parisian sirens for what seemed like hours while the couple was trapped in the wreckage. More notably, Chris’s long career in journalism was distinguished by courage and eloquence, whether he was covering wars in Central America or writing about his life as an ex-pat in Paris. He was that rare son who had managed to emerge from a colossal shadow to achieve a measure of greatness on his own.

I first got to know about Chris from his autobiography, The Summer of Deliverance, an account of alienation from and eventual reconciliation with a father who in his drunken days could rival ol’ Fyodor Karamazov in the category of shittiest dad ever. My old man, too, had issues, so I could really identify with Chris’s childhood traumas.

Chris’s father taught me in the fall of 1976, the semester in which both Chris’s mother died and his father remarried.  I had published on this site a somewhat unflattering portrait of James Dickey as a teacher [link] so I was surprised when I received a friendship request on Facebook from Chris.[1]

How did he know I existed? Had he read the blog post?

I bet not. He probably heard about me though our mutual friend Megan Conroy or from my former student Will Cathcart, who was a colleague, or maybe I just popped up in “people who may know.”

Anyway, it really doesn’t matter. What matters is that through his Facebook postings, I felt as if I had grown to know Chris.[2]  He was witty, gentle, kind – and you could see this in his face. He often posted photographs and videos of Parisian street scenes. I love Paris, and having Chris on my feed allowed me to visit vicariously and often. Just yesterday, a mere 19 hours ago, the day of his death, he posted this.

And then the door-of-life slams shut; the lights go out. If I, who didn’t really know him, feel this intense level of loss, it must be absolute devastation for his friends and family.

As they say, may their memories of him be a blessing.

[1] The piece is actually more of an indictment of my own youthful callousness than it is a condemnation of Dickey, who was, after all, grieving.

[2] In fact, Caroline, Brooks, and I were going to try to arrange to meet up with him in Paris this summer before King Coronavirus’s invasion.