Alas, the other day a woman, who (perhaps not coincidentally) happened to be an enthusiastic lover and promoter of animal life, perished when she wandered too close to an alligator on Kiawah Island.

Here’s Post and Courier reporter Gregory Yee Gyee’s account of the unfortunate incident, which I have subtitled, “The Report Said.”

[The victim] Covert saw an alligator in a pond behind her friend’s home on Salt Cedar Lane and wanted to get closer, the report said.

The friend told deputies that Covert was on the back steps of her home and eventually moved down toward the pond.

″(She) kept yelling for her friend to get away and saw her friend was about four feet from the edge of the water when the big alligator came up and attacked her friend,” the report said.

The friend’s husband grabbed a shovel while Covert’s friend called 911, the report said. The husband tried to hit the alligator in a bid to make it release Covert, but those efforts were not successful.

The alligator dragged Covert under the water, the report said.

“She stated her friend never screamed,” the report said.

Will this unfortunate incident go viral as a sort of parable for the dangers of violating social distancing during what I have come to call Da Cora? 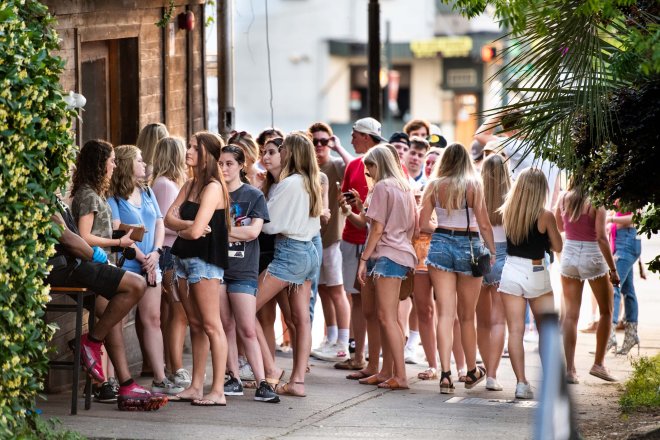 Patrons waiting outside Jake’s, a Columbia, SC restaurant on 4 May 2020 (photo by Sean Rayford via Soda Citizen)

Damn, why didn’t I sell my Boeing stock and reinvest it in some cut-off jean manufacturer?

Anyway, in the USA, divided as it is, we have two opposing factions clashing across social media about how we should handle the contagion, and, not surprisingly, ideas about how to deal with the crisis tend to align themselves to opposite ends of the political spectrum.

On the one hand, we have the left, citizens who believe in science and place human life above economic considerations. They see the denizens of nursing homes as memaws and papaws, not as statistical models who have in many cases outlived the expected average lifespan of 78.54 years.

The left believes opening too soon is ill-advised, that a new wave of contagion will result, which will wreck the economy the other side hopes to rescue by reopening restaurants, barbershops, beauty salons, tattoo parlors, and strip joints.[1]

The left has faith in human rationality, believes that restaurants will remain empty because people won’t feel safe. They believe we all should wear masks, as much to protect others as ourselves. Ideally, some would like social distancing to continue until a vaccination is available.

On the other hand, we have the right, Gadsden-flag-waving, mask-eschewing rugged individualists who don’t want the government treading on them. They cite articles from outlier scientists who claim the infection and death tolls are statistically insignificant, that the way to overcome Da Cora is to have a majority of the population get infected and  develop antibodies, which eventually will choke off the virus. Embracing social Darwinism, they argue that young folks (with a few exceptions) tend to suffer only mild symptoms, so let’s get them infected so they can develop antibodies, recover, and go back to serving those beers and inking those biceps, and if the aged and others suffering from pre-existing conditions die, well, that’s too bad –  that’s the way that nature works.

Of course, things would be much better if we had adequate testing to determine whom it’s safe to be around and who isn’t, but the fact of the matter is that we don’t.  I personally don’t know what ultimately is right. I tend to seek a middle way in life’s dilemmas. Is there one to be found here? Dunno. Maybe?

Anyway, at least in South Carolina, where I live, the Governor is reopening the state. I also read in this morning’s paper that the beaches are letting non-residents back on. Yesterday, here on Folly, restaurants were offering outdoor dining, and when I went for pick-up at Chico Feo, the customers were, unlike at Jake’s, practicing safe social distancing. 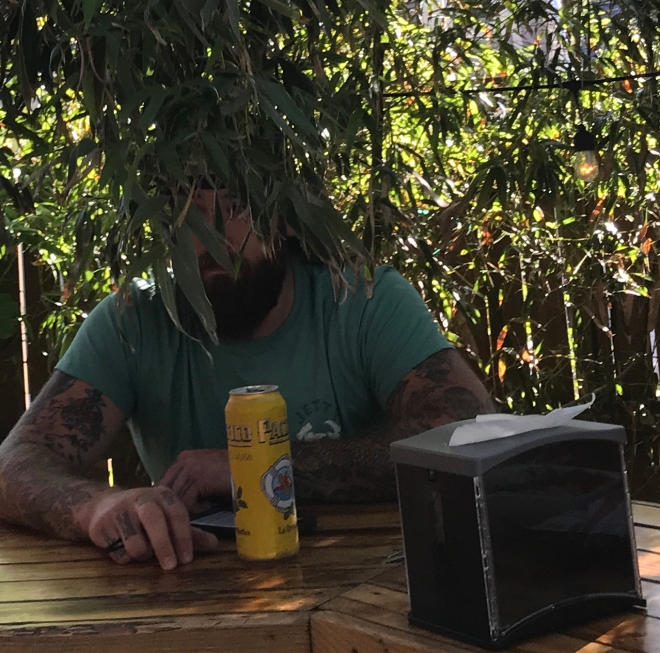 One of my personal heroes, Kenny, modeling one of nature’s very own protective masks

At Chico, there were one-way entrances and exits and bottles of hand sanitizer available. Nonresidents were being allowed on the island at seven, but I was safely at home by then and didn’t gander back out to take a peek.

At any rate, I would suggest that if you’re old (like me) and/or suffer from an underlying condition, you might want to postpone that barbed-wire tattoo or foray to the Wild, Wild Joker Club.

But, hey, it’s up to you, dear existentialist.

[1] Lap dances, I have read, occur much closer than the six feet of separation epidemiologists consider safe.

3 thoughts on “To Distance or Not to Distance”