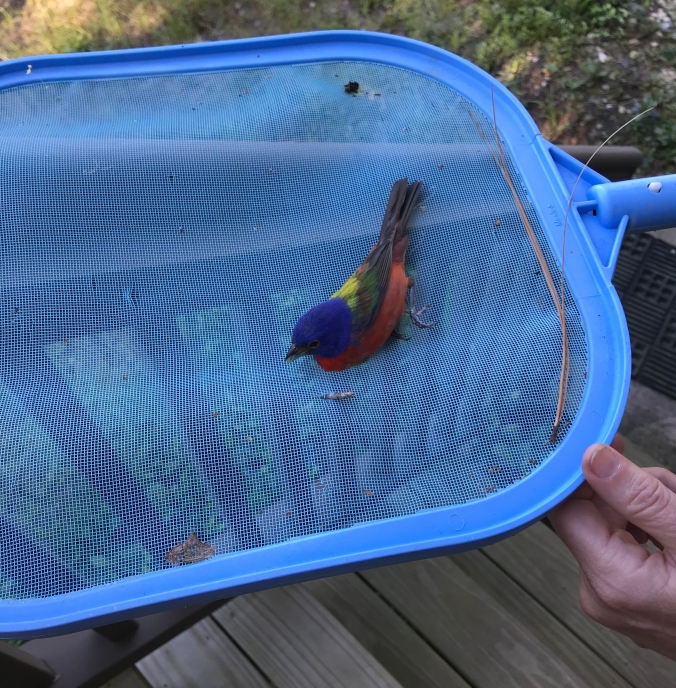 To tell the truth, I’m not a fan of nature documentaries. For one thing, I don’t need to be constantly reminded that exotic habitats are rapidly disappearing from our poisoned planet, nor do I enjoy the spectacle of claws, talons, and incisors ripping the flesh from scampering rodents, warthogs, zebras, giraffes, antelopes, or baby elephants. The whole Darwinian horror show of survival shivers me timbers, sends rushes of disgust up my spinal cord.

And who in the hell are you supposed to pull for?  The pride of lions with their adorable cubs and dead-beat dads need to eat, but the elands about to be preyed upon seem somehow more sympathetic. Inevitably, after the kill come packs of scurvy hyenas (who also need to eat) who chase off the lions and take over the flesh-ripping and ravenous swallowing. Yuck.

Not surprisingly, given my delicate sensibility, in my youth I became an avid indoorsman, an inept male incapable of stringing a rod and reel (or baiting a hook for that matter) but one who could distinguish Jimmy Cagney from George Raft, Buster Keaton from Harold Lloyd. Why go traipsing through insect infested swamps when you can read “The Big Two-Hearted River” while sipping on a peaty single-malted Scotch?

That said, I happen to live in a spot that provides wide open views of the Folly River, which boasts an abundance of wildlife. Out back I’ve seen dolphins, otters, a mink, herons, egrets, ospreys, bald eagles, wood storks, bats, racoons, and rats. About twenty years ago, my late wife Judy Birdsong cajoled me into building a bird feeder, which consisted of a sheet of plywood positioned on a metal pole in the backyard. Judy would scatter seeds there, and birds would visit, chasing each other off until that fateful day when a red-tailed hawk swooped down and snatched one of the birds while the rest frantically peppered the plate glass windows that provide us our views. Afterwards, Judy insisted I disassemble the feeder, which suited me fine.

Don’t get me wrong. I have nothing against sunlight, consider vitamin D an asset. In fact, my favorite watering hole Chico Feo is an al fresco bar that closes when it rains or gets too cold. So now with Chico Feo shut down during the quarantine[1], my wife Caroline and I spend our happy hours on our back deck enjoying a couple of pre-dinner libations. This April has featured unusually low humidity, and it’s enjoyable looking out over golden sunlight dappling the greening marsh and watching merchant ships in the distance sliding past the Morris Island Lighthouse in and out of Charleston Harbor. 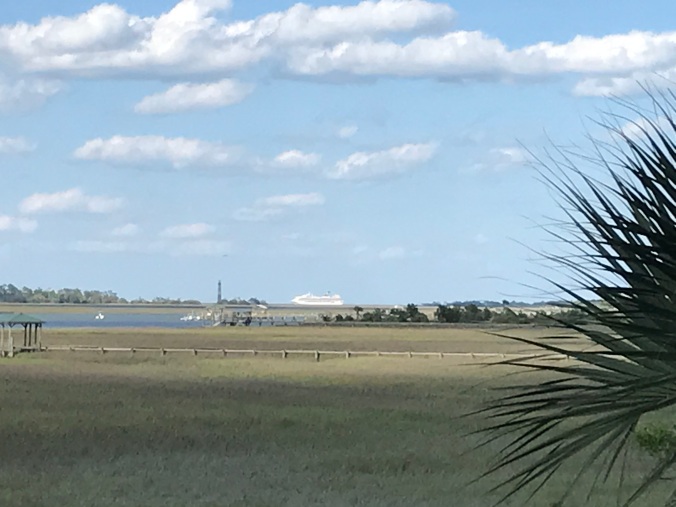 So there we were yesterday sitting on our deck enjoying our ridiculously highbrow conversation (was Wallace Stegner’s Lyman Ward a more sympathetic amputee than Hemingway’s Harry Morgan) when Caroline suddenly stood up cried, “Oh, no!”

A bird just slammed into the window and dropped to the ground!”

“What kind of bird?”

“I think it was a cardinal,” she said.

“Oh, it’ll probably come to,” I said, unmoved (and unmoving), but Caroline was already scampering down the steps to comb through the Asiatic jasmine for fallen bird, which, amazingly she found in a couple of minutes, a male painted bunting, not a cardinal, inert but not dead. 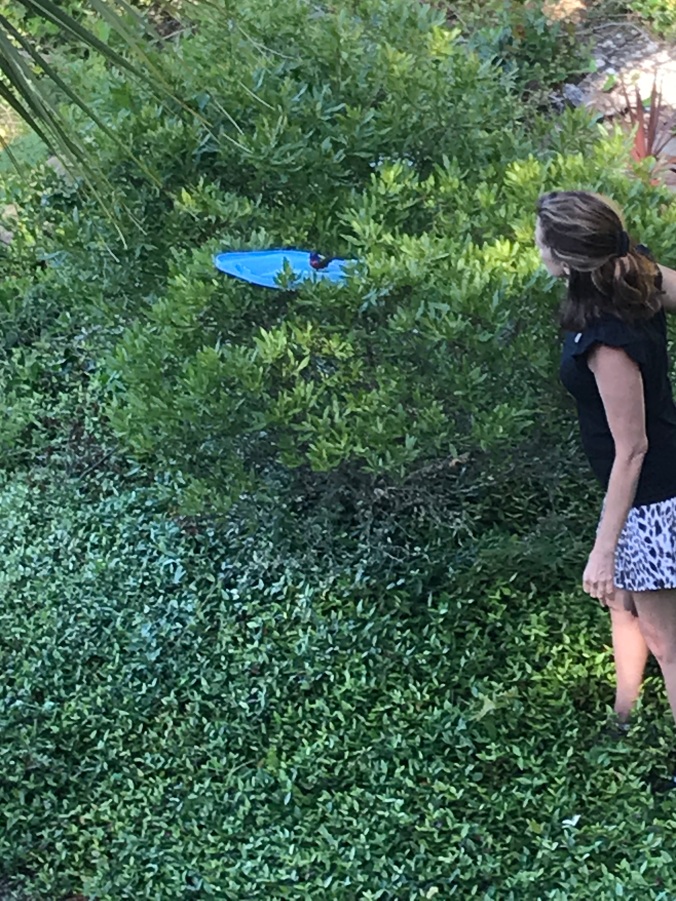 Caroline picked him up and placed him in a net we use for scooping out our water garden and placed the net in the middle of the yard. We watched intensely, hoping for some movement, but there was none. Then the shadow of a large bird darkened the deck, and sure enough, we looked up to see a red-tailed hawk cruising.

So both of us went down and placed the net in a wax myrtle for greater camouflage. The bunting was now standing, but otherwise not moving, looking like the taxidermized Carolina Parakeet (long extinct) that was displayed in the Old Charleston Museum off of Calhoun Street.

Caroline noticed that maybe his claw was entangled in the mesh of the net, and as she reached down, the bunting flew off into a thicket of Elaeagnus, where I think he and his mate nest.

The gorgeous fellow will live to see another day –– maybe. 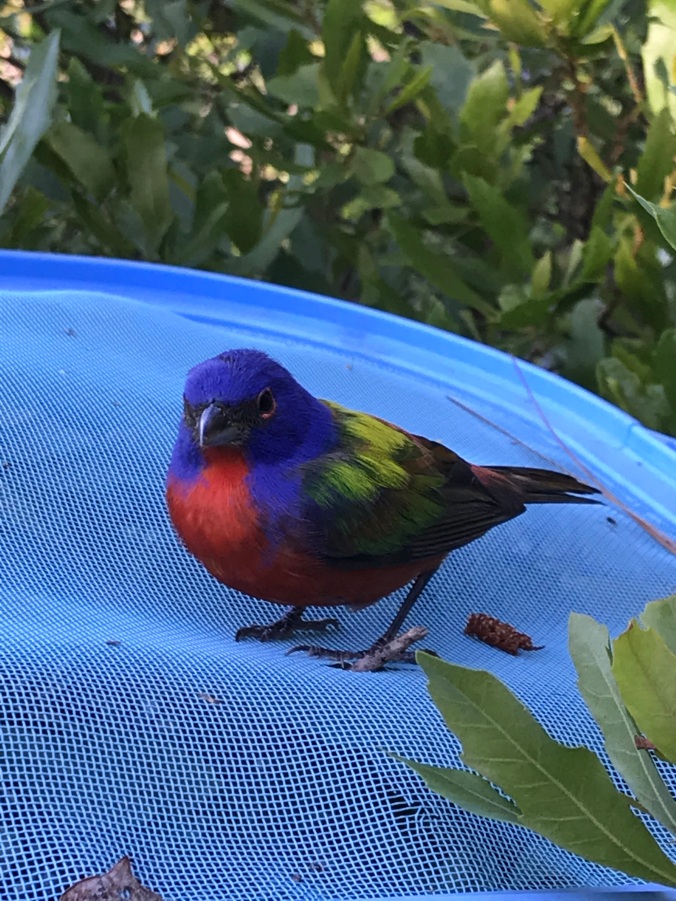 And as far as the red-tailed hawk is concerned, let him eat rats. 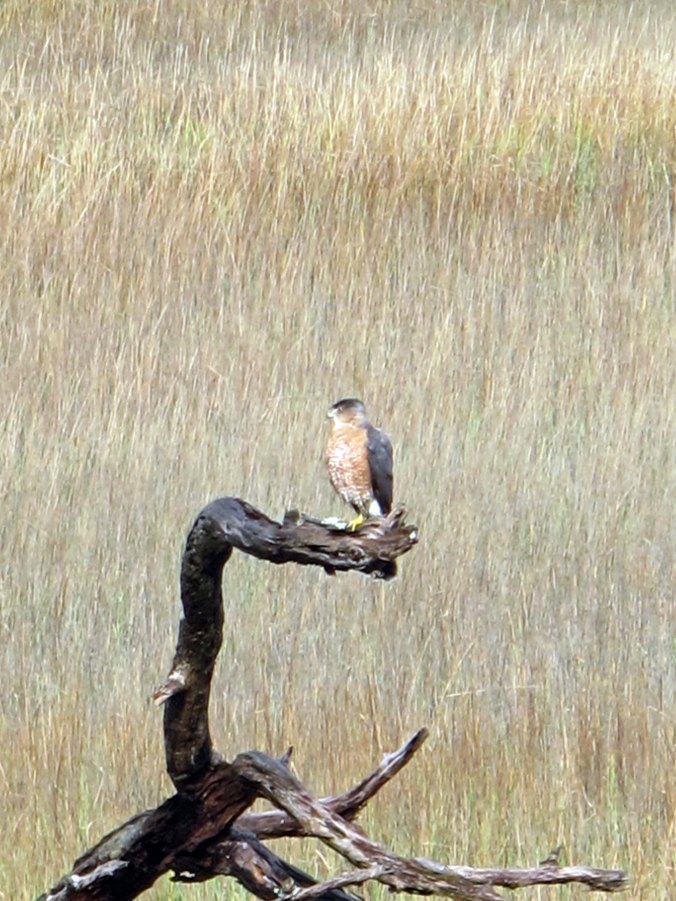 [1] You can on some days still get takeout.