I grew up on Perry Mason, viewing the show with my parents virtually every Saturday night up until I was old enough to go out and create my own trouble. Until then, I enjoyed watching the virtuoso attorney leisurely handle the one case he had per week. I mean, that burly barrister was hands-on.  He’d drive around LA and its environs half the night sleuthing, make house calls galore, and be in the office the next morning alert and ready to go. Most importantly, however, he used his prodigious mind to solve each and every case in a bang-bang third act confession, all the loose ends neatly wrapped-up — ta da!

One of the pundits covering the Impeachment Inquiry evoked that great lawyer’s name, warned us not to expect the proceedings to be “Perry Mason.”  Indeed, after the first “episode” featuring Taylor and Kent, media critics complained that the proceedings lacked “pizzazz.”  No way the American public whose attention spans have been decimated by fast cut editing, screen memes, multi-tasking, and herky jerky gifs could ever focus on a series of uninspiring factual questions.

Nevertheless, Devin Nunes, who, I understand, is suing a cow, has likened at various times the proceedings to an actor’s audition, a circus, and a crusade. To be truthful, he and his shirtsleeve henchmen Jim Jordan have been the most animated performers, especially Jordan who rat-a-tats details of debunked conspiracy theories like a carnival barker, and when finished, exudes the smug, self-congratulatory demeanor of  an overconfident high school debater. Every melodrama needs a villain to hate, and from my admittedly left-of-center perspective, I find the two to be, well, for lack of a better word, deplorable.  Boo!  Hiss!

Despite Nunes’ contention that the Inquiry is tanking ratings-wise,[1] I found Tuesday’s and Wednesday’s broadcasts to be fascinating. I especially enjoyed Democratic Counsel David Goldman’s questioning of Timothy Morrison, who appeared beyond uncomfortable as he continually looked left at his lawyer to make sure what he was saying wouldn’t result in a perjury indictment. Watching him squirm, his eyes darting as if he expected some predator to swallow him at any moment, reminded me of what great literature often depicts: consistently telling the straight truth is preferable to prevarication. [2]  What a difference in demeanor between him and William Taylor, who calmly looked his questioners in the eye, answered their inquiries, and actually smiled while being assailed. 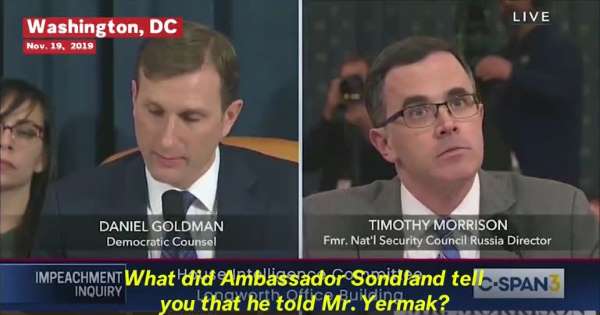 Wednesday’s NY Times morning teaser posited three possibilities for Ambassador Gordon Sondland’s testimony.  He could lie, plead the Fifth, or fess up. As it turns out, the episode might have been billed as The Monster Bus Show, as Ambassador Sondland flattened the upper echelon of the Trump Administration, including Mick Mulvaney, Rick Perry, Mike Pompeo, Mike Pence, and that Master of Reality Television himself, Donald J Trump, who before leaving for wherever on his helicopter read from a piece of paper: “I don’t know him very well.  I have not spoken with him much.  This is not a man I know well.  He seems like a nice guy though.”

C’mon, Donald, learn your lines.  It’s so much more realistic.

For his part, at least at the beginning of the festivities, Sondland seemed calm – some have used the adjective debonair – perhaps secure in having decided to tell the truth and knowing he has millions of dollars at his disposal for securing topnotch legal counsel.

Of course, it would have been more dramatic if Trump burst into the chamber, fell to his knees, and blurted out a tearful confession like the murderers on Perry Mason.

At the end of each episode, Perry, his detective Paul Drake, and secretary Della Street huddle to explain how the case was solved.  How fun would it be to  peek in on Adam Schiff, David Goldman, and Nancy Pelosi connecting the dots in the Speaker’s office after today’s testimony

But, like I said, this is reality television, not an adaption of an Erle Stanley Gardner courtroom drama. That doesn’t mean, however, that the action necessarily lacks interest, especially given the stakes.

[1] From what I understand, television ratings don’t take into account streaming, which I suspect is how most of us viewers are accessing the proceedings.