For this agnostic/ Buddhist dilettante, Halloween stands supreme among quasi religious holidays, towering over Christmas and Easter the way the skyscrapers of commerce on Wall Street dwarf Trinity Episcopal Church. 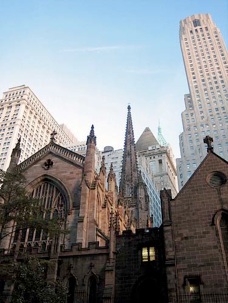 Here’s the church; where’s the steeple?

People in the Lowcountry of South Carolina don’t decorate all that much for Halloween, a pumpkin on a porch maybe, but in suburban Atlanta a few years back I encountered some killer (literally) decorations, my favorite a mangled bike in the front lawn of a $800,000 house, a skeleton lying next to the bike, the helmet overturned not far from the skull.  Other celebrants had festooned their azaleas with spun cotton to counterfeit cobwebs; others had skeletons hanging from trees or cardboard black cats arching their backs with their hair on end, brandishing serious predatory dentistry. 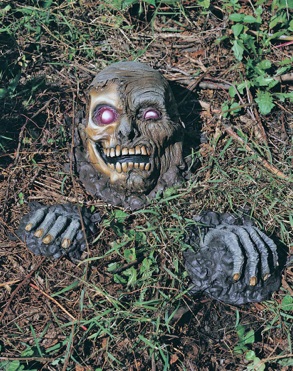 Let’s face it, zombies trump archangels in contemporary America, the walking dead a more relatable metaphor for the populace than gravity defying beings of European descent levitating above cloud banks.

For me as a child, the joy of Christmas lay in expectation, the idea of playing with the electric train certainly more fun than actually watching it go around and around in its little circle ad nauseam until the transformer inevitably blew.

Plus, your parents never took you away on Halloween to visit great aunts and their spinster daughters, that looming visit casting shadows of dread over the toy strewn landscape of the living room.  We generally purchased from Poppelton’s Five and Dime our inexpensive flammable costumes, skeleton smocks and cheap plastic-coated masks or maybe a Zorro get-up.  I especially loved Halloween carnivals with their apple bobbing booths, candied apples, and haunted houses. 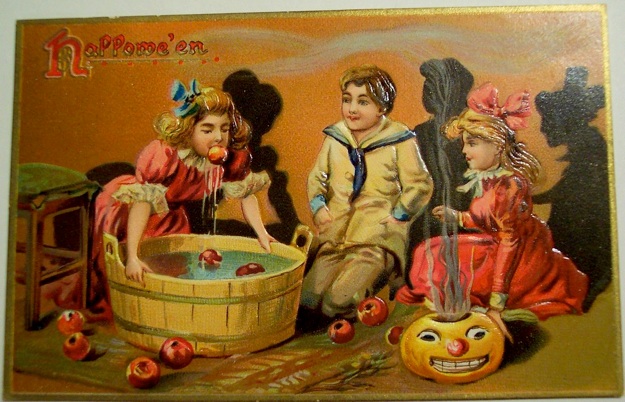 However, my innate shyness always made trick-or-treating feel a bit uncomfortable.  Knowing what I know now, I might have chosen to dress up like a Book-of-Mormon-toting Evangelist or a Jehovah’s Witness and trade some tracts for some candy corn.

Nevertheless, I certainly enjoyed the gluttonous aftermath of OD-ing on tiny Snickers and Mars bars and bartering less-loved goodies with my buddies. Oh, and to score some malted-milk-ball Whoppers was like copping cocaine, whatever that was.

Of course, as an adult, Halloween can be a drag if you live in a neighborhood where trick-or-treaters ring your doorbell every 42 seconds; however, it’s not a problem on Folly Beach, the barrier island where I live, where trick-or-treating is forbidden because of vacant vacation homes, unlighted streets, and the likelihood  of motorists being hepped up on something stronger than sugar.

So as the year shuffles off towards its hospice, let’s celebrate the macabre, the zombie apocalypse, an eternity spent in everlasting agony, and other terrifying possibilities.

Once there was a little boy who wouldn’t say his prayers,
and when he went to bed at night away up stairs,
his mammy heard him holler and his daddy heard him bawl,
and when they turned the covers down,
he wasn’t there at all!
They searched for him in the attic room
and cubby hole and press
and even up the chimney flu and every wheres, I guess,
but all they ever found of him was just his pants and round-abouts
and the goblins will get ya if ya don’t watch out!!