During a scavenger hunt to cop some eye-arresting images for a commentary on our Orwellian world, I ran across this rather disquieting tidbit.

For the past few years, federal agencies have defended body scanning by insisting all images will be discarded as soon as they’re viewed.  The Transportation Security Administration claimed last summer, for instance, that “scanned images cannot be stored or recorded.”

Now it turns out some police agencies are storing controversial images after all.  The U.S. Marshal’s Service admitted last week that it had surreptitiously saved tens of thousands of images recorded with a millimeter wave system at the security checkpoint of a single Florida courthouse.

Way to go fundamentalist Islamic terrorists! Thanks to your penchant for slaughtering innocents,  your females’ burka-shrouded mysteries (including ankles, knee caps, and eye-brows) are now on display for gawking infidels stationed at TSA monitors. Worse, downloaded images of your wives, daughters, sisters, and mothers are being passed along to police agencies where they’re no doubt swapped like baseball cards, ending up on the hard drives of buzzed-cut, steely-eyed cretins who joined the force hoping that working in law enforcement would stem the perverted sexual fantasies that have haunted them ever since that fifth-grade Boy Scout campout.

Obviously, most reasonable people value their lives over their modesty as evidenced by our trips to proctologists and gynecologists; however, I wonder if these scanners might be a bit of  (if you’ll forgive the expression) overkill.  After all, we have metal detectors, pat downs, etc, and it’s not as if planes are dropping from the sky like confetti. 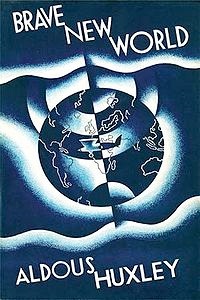 Not that Huxley’s novel isn’t impressively prophetic.  Brave New World certainly foretells the cult of consumerism, the proliferation of recreational sex, the consumption of hallucinogens; however, we don’t live in a peaceful World State where citizens consciously eschew individuality and discount death, and although genetic engineering does exist, our legions of pizza delivery drivers and cosmetologists haven’t been pre-programmed into those occupations by soulless biologists in state-run human hatcheries.

Orwell, on the other hand, gave us newspeak (Reagan officially dubbed the MX Missile with its 300-kiloton W87 nuclear warhead as The Peace Keeper); perpetual war against inscrutable, unconquerable, and sometimes interchangeable enemies (e..g., terrorism /our sometime friend Saddam); and a society in which its citizens are monitored (see above).

Donald Rumsfeld and Saddam Yukking it up antebellum

But what Blair/Orwell failed to foresee is that Big Brother would have a fraternal twin, Big Business,  who seems the more dominant of the two and who also is gathering information about you and me with more zest and much more efficiently.

Lots of entities keep track of our seemingly insignificant gestures.  E.g., our monetary gift to John Spratt’s reelection campaign of 2006 has been dully noted, digitalized, and appears on the Web.  No telling who’s monitoring your Facebook shenanigans, scrutinizing those photographs of you posted by your ex-girlfriend’s husband documenting that unfortunate evening at your recent high school reunion.

And, who really minds a security camera recording a thug snatching your purse at the Kwik Shop?  Like virtually everything nowadays, surveillance poses complicated questions.  Whatever the case,  whether you’re picking your nose as you hurry across the parking lot of your campus or purchasing online an audio recording of De Sade’s Justine, your action has been recorded and duly noted.