Reading the late James Hillman’s Selected Writings (edited by Thomas Moore) frustrates me because Hillman deals with terms  — soul, archetype, spirit – that by his own definition defy definition.  He creates metaphors, uses Greek gods and goddesses as examples.  The gist is that like Steppenwolf’s Harry Haller, we have an infinite number of selves that slosh around the in a murky swamp of soul, a sort of neuronbuzz that connects mind to body.  What frustrates me is his lack of empiricism – where does he get his ideas? from an oracle? Nor does he provide case histories to help embody these archetypal inner beings.

Nevertheless, I agree with much of what says about our contemporary world, and he offers some wonderful turns of phrase.

Dumb sex is cultural. Our white American speech doesn’t provide good words for genitals and intercourse – and hardly any phrases about places, rhythms, touches, and tastes.  Listen to the marvelous language of foreign erotica; jade stalk, palace gates, ambrosia!  Compare these with cock, prick, dick, nuts, balls, with suck, jerk blow, yank, and with gash, bush, frog, slit, clit, hole.  A Chinese plum is to be deliciously enjoyed; our cherries are to be taken, popped, or broken [. . .] Our Puritan prose cannot encompass the sexual imagination to which great temples are built in India.

The human person as a data bank does not need to read more than functionally.  A data bank deciding yes or no on the basis of feedback (i.e. reinforcement) need not imagine beyond getting, storing, and spending.  Just get the instructions right; never mind the content. Learn the how rather than the what with its qualities, values, and subtleties.  The human agent becomes an incarnated credit card performing the religious rituals of consumerism.

[. . .] places tend to remind us of history, of ethic and earthly differences that cannot be homogenized into the universal sameness of our contemporary utopias, the nowhere everywhere of our shopping centers and roads to and from them.

So, according to Hillman, materialism has triumphed over spirituality.

Although perhaps generally true, it certainly isn’t universally true.  I cannot think of one close friend who prefers things to experiences, who would drive a Range Rover at the expense of not being able to travel.  The few very wealthy acquaintances I know are interested in both mind and spirit and never flaunt their fortunes.  And my Chico Feo bar buddies, many who live from paycheck to paycheck, seem well satisfied with their lives.  Before work each morning (and perhaps, even more impressively, on weekends), my friend Jason watches the sun rise above the Stono River and then posts a photograph with an accompanying prose passage, poem or song. 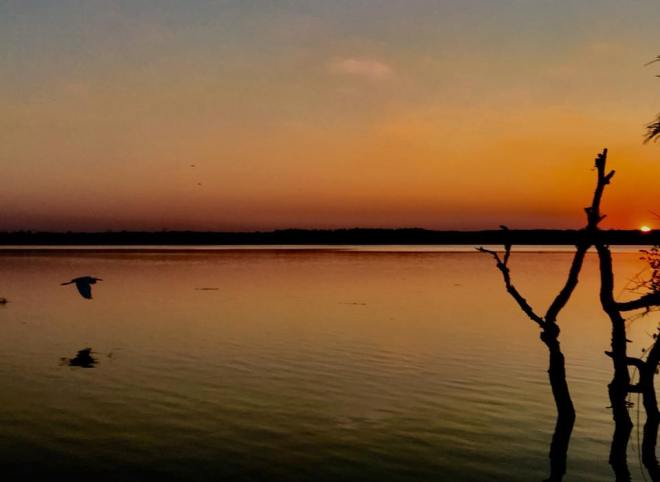 Nevertheless, fighting traffic at rush hour through a wasteland of billboards and cell phone towers on the thoroughfares Hillman describes does indeed suck/blow/yank — especially if you’re in a hurry.  But if you’re riding in an air-conditioned vehicle with a system that plays music or words you select, you shouldn’t complain too loudly.

Summon your inner Apollo or Athena, or, in my case, given that I’m likely to be listening to James Brown or the Rolling Stones, inner Dionysius.

And remember (see the story of Lazarus for an example) Jesus was never in a hurry.

Jason and Me at Chico Feo (photo credit Caroline Traugott)

6 thoughts on “The Nowhere That Is Not Necessarily Everywhere”