I’ve been trying to slow down, to be a better Buddhist, which means paying more attention, e.g., to things like the sway of sunlight and shadow on the bookcase to my right, what my friend Leopold Bloom would call “a phenomena.”

The fellow in the daguerreotype is one of my late wife Judy’s ancestors. In those days, posing for a photo was serious business. You had to be very still. Very few people sit still nowadays. I don’t know his name, but I can see a resemblance between him and Judy’s sister Becky around their eyes. Judy knew who he was, I think. 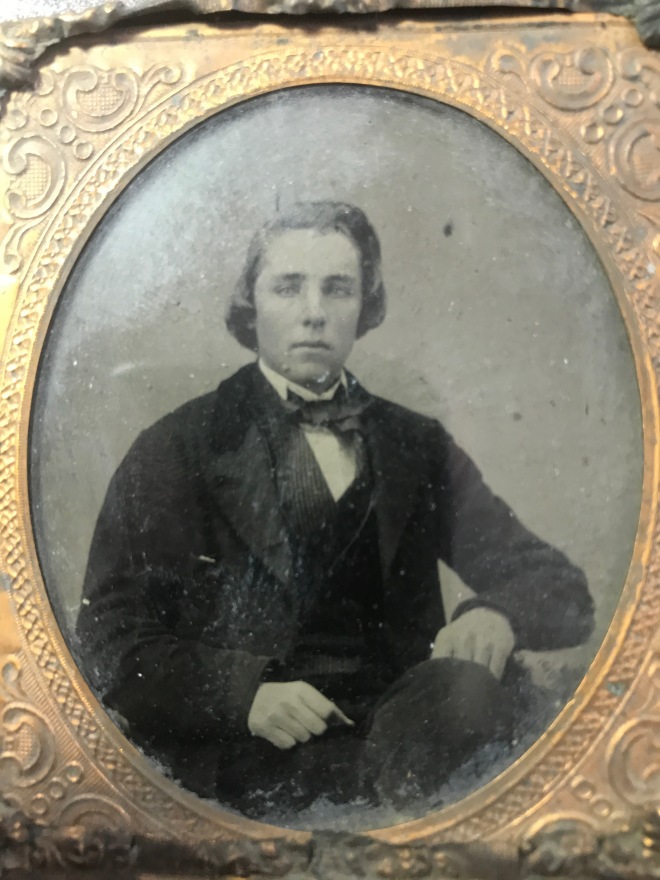 No one thinks about this man anymore, except for me, and now, for a second, you.

Thirty something years ago, a newlywed living in Rantowles, I ran across a poem by Robert Penn Warren, still alive at the time, a poem about old age in which he mused that when he would die so would all living memory of his grandfather.

I sat in the same room with Robert Penn Warren once in the early ‘70s when he met with about 20 or so students to answer our questions. David, the TA who taught me fiction writing, asked Mr. Warren the first question, if he thought a formal education would have “ruined”[1] Ernest Hemingway.

“How in the hell should I know,” was Warren’s rude answer, barked loudly, in a tone bordering on exasperation.

Although I was only five or so, I remember when my great grandfather Luther Moore died. There was an article about him in the paper because he had been some minor elected official and ridden a bicycle all over Bishopville in his 90s. I met him once at my other great grandfather’s house in North Charleston.

When he arrived, Grandfather Luther, shouted, “I’m blind and deaf so there’s no need for any of you to come and try to talk to me.”

After their opening salvos, I didn’t engage with either Robert Penn Warren, a fellow redhead, or Grandfather Luther, who may have had a thick head of white hair or been as bald as an emu egg – I don’t remember and there’s no one alive to ask. Both old men were scary, angry about something, maybe simply about about being old.

What shall I do with this absurdity—

Decrepit age that has been tied to me

If Yeats had been a better Buddhist, he wouldn’t have written these lines. We would be more impoverished but he more content.

Which is ultimately more important? Does it matter?

But then, here’s how the poem ends:

Now shall I make my soul,

Compelling it to study

In a learned school

Till the wreck of body,

Or what worse evil come—

The death of friends, or death

Of every brilliant eye

That made a catch in the breath—

Seem but the clouds of the sky

When the horizon fades,

Or a bird’s sleepy cry

Among the deepening shades.