Out Back of Kermit’s Mother-in-Law Lounge

With my pith helmet safely stowed in the overhead bin, photographer/videographer/grief counselor Loquacia Muldoon and I took our seats on a 6 a.m. Southwest flight bound for New Orleans. Jacob T Williams II, with whom I’ve been practicing anthropology going on 45 years, had invited us to his home base in the Big Easy to observe the peoples of that city doing what they do best, getting down.

As my regular readers know, when I practice ethnography, I try to blend with the people I’m observing by mimicking their garb, whether it be donning a Gamecock baseball cap to study a college football game or slithering into a silk dress and feathery boa to rub elbows with drag queens. In the case of New Orleans, though, I found I could dress pretty much normally just as long as I cocked my fedora at the appropriate angle, steeper than usual.

During the expedition, the events became more dramatic from day to day, each successive 24-hour period becoming more funktastic than the next, culminating in the patio area of the bad-ass-iest place I’ve ever set foot in, Kermit Ruffins’ Mother-in-Law Lounge up on North Claiborne in Treme.

Here is my report. 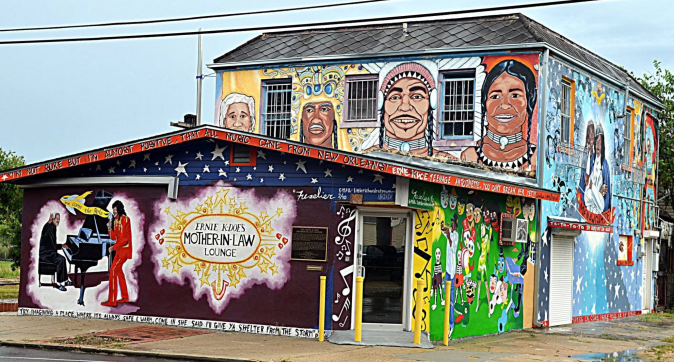 Our flight arriving just after noon, Jake himself retrieved us from the airport, then took us to an eating establishment called the Cochon Butcher. Mostly white the clientele, this establishment could have been mistaken for a Charleston eatery except for some of its decorative touches.

After a much-needed nap, we met Jake and his assistant Susan at Jefferson Square to catch a bit of Robert Cray, who was playing for free at the Barbecue and Blues Festival. I know, I know, the following statement is going to sound hypocritical, but the place was crawling with bourgeoisie, lazy white people lolling in lawn chairs, nodding sedately to the gentlemanly blues of Mr. Cray.

As Jake and Susan announced their departure, I mentioned I wanted to check out the Rock-n-Bowl. Jake informed me the brass band the Soul Brothers were playing there, so Loquacia and I hopped a Uber and made our way to the venue, a combination bowling alley, bar, and music showcase.

The Soul Rebels were, of course, great, but the infirmity of age required I leave during their very first set. Oh, how the funk be wasted on the bachelorette party participants there dressed in their kitty kat kostumes.

Jake mentioned that every Sunday various organizations sponsor a second line parade, so via google, I discovered one was happening on North Broad Street come one o’clock, so Loquacia and I, with photographic equipment in tow, tromped the two-mile, thirteen minute walk. When we arrived at the destination, the drizzle that had been falling went all downpour on us, but some friendly folk invited us to join them on a porch out of the rain.

While we were standing there, a float arrived claiming to be the Big Chief’s float, and some generous souls stood at the railing handing out half pints of some kind of clear liquor, and when those ran out, Mardi Gras beads.  Not wanting to intrude, Loquacia and I had to settle for refreshments provided by street vendors. 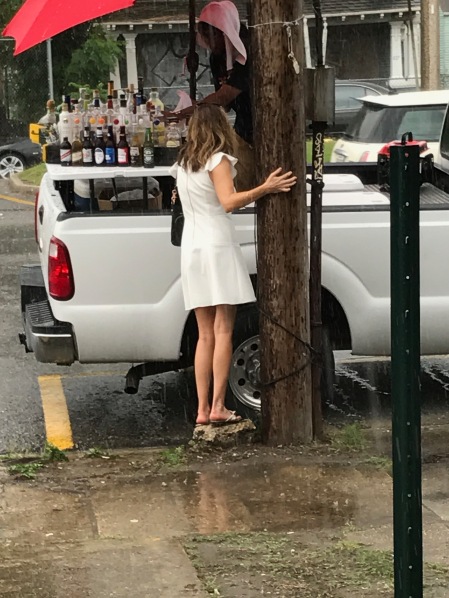 As we waited, a drummer in a wheelchair was playing his heart out, sounding like a full-fledged band, until finally the festivities got under way. The video below is the first line, and if you love soulfulness, you need to check it out.

Well, you might reckon that the line parade would be the apotheosis of the party, but, lo, no, on Monday afternoon Jake us took us to  Kermit’s Mother in Law Lounge, owned, obviously, by trumpeter Kermit Ruffins.  When we arrived, a trio was playing, maybe recording.  Only Jake, Loquacia, a couple of staff members, and I were inside.

An old man who seemed to be in maintenance introduced us to Spodie, aka Derrick Shezbie, who spent some time with us, pontificated, bore gifts, etc.

from left to right, humble ethnographer, Jake, and Spodie

Oh yeah, Kermit and Cyril Neville were also hanging around.  Kermit is a happy soul, smiling, generous with the fist pump, hospitable.  Loquacia played tetherball with a young teenager as ten or so adults tended to their hedonism. 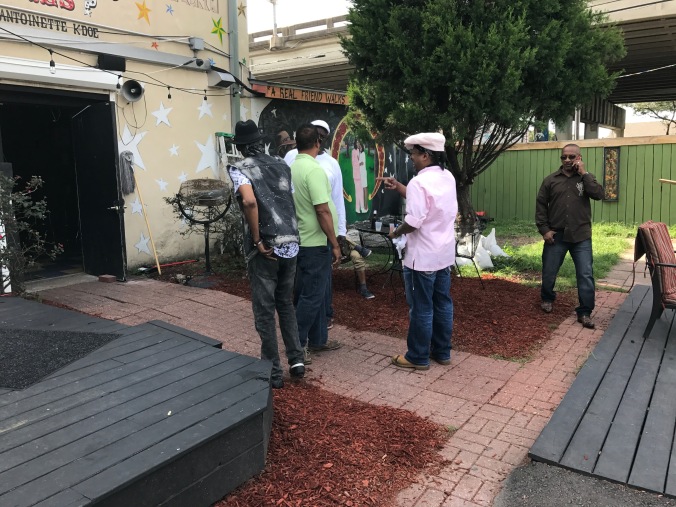 Kermit in the pink hat, Cyril Neville with back facing the camera

Eventually it was nap time, and we had a farewell dinner at Mr. Ed’s Oyster Bar, watched some youtube videos of Dr John and Etta, Muddy Waters, and the Eurythmics, but alas, the night was old, and so am I.

A mournful flight home, but the memories remain. 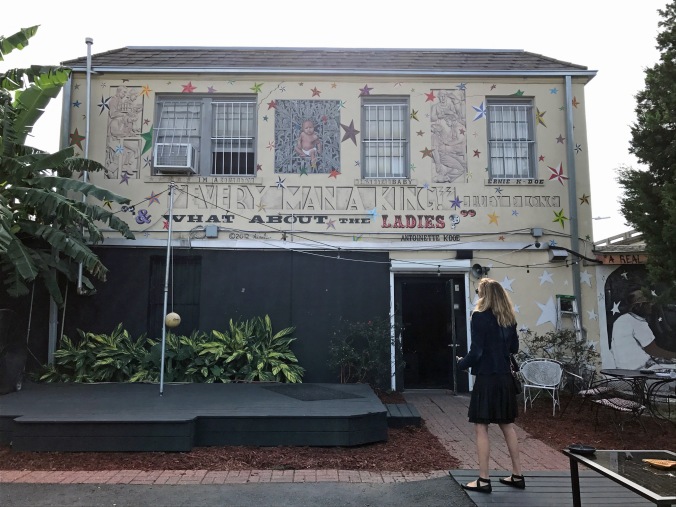 3 thoughts on “There Is a Lounge in New Orleans”