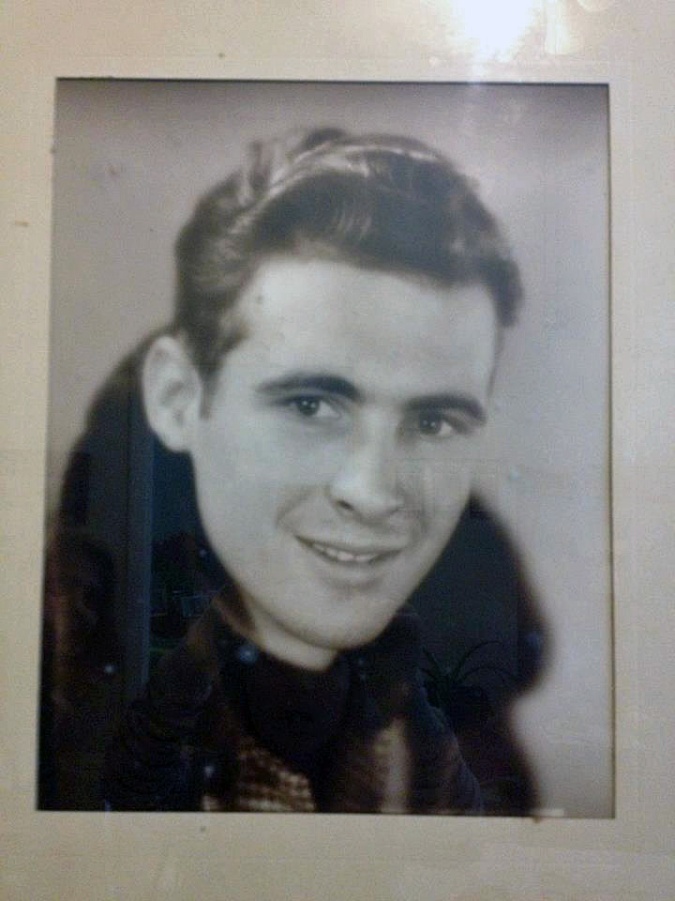 Grieving for my wife Judy Birdsong has somehow (I’m struggling for words here)  –   brought to mind?  –  disinterred? – conjured? – the memories of other loved ones lost. I’ve assiduously avoided self-help articles about dealing with the death of a spouse, so in the vacancy of Judy’s absence, my suddenly thinking of Mama and getting misty-eyed might be typical. I guess I ought to google it. Or not. What does it matter if it’s normal or abnormal? To use Judy’s signature line, “It is what it is.”

Even my father, whom I hold in some contempt, has sneaked up on me with his roguish grin and rattled out some fond memories. It makes me wonder if I’ve been too hard on him.

Or too hard on his demons.

If you know me well, you’ve probably heard me speak words of recrimination against my father. So I’ve decided to post here my eulogy for him delivered at St Paul’s Church in Summerville in 2010.

In a eulogy it’s mandatory you say nice things about the deceased, and in fact, many nice things can be said about Daddy. Nevertheless, writing and delivering what follows was hard for me because I didn’t want to be hypocritical. I wanted to be true to me and to him, maybe in that order. More importantly, I want to be true to him now.

One of the most famous poems on death in the English language is Dylan Thomas’s “Do Not Go Gentle into That Good Night.” In the poem, Thomas addresses his father who is dying of cancer, urging him to cling ferociously to life, even if it means merely cursing the inevitable. The poem’s only nineteen lines, and I hope you’ll indulge an old English teacher if he reads it in its entirety:

Do not go gentle into that good night,

Old age should burn and rave at close of day;

Rage, rage, against the dying of the light.

Though wise men at their end know dark is right,

Because their words had forked no lightning they

Good men, the last wave by, crying how bright

Their frail deeds might have danced in a green bay,

Wild men who caught and sang the sun in flight,

And learn too late, they grieved it on its way,

Grave men, near death, who see with blinding sight

Blind eyes could blaze like meteors and be gay,

And you, my father, there on the sad height,

Curse, bless, me now with your fierce tears, I pray.

In Thomas’s classification of men – wise men, good men, wild men, and grave men – my father would be best categorized as a “wild man.” Cyrano de Bergerac was his literary hero, that soulful swordsman with a wit as keen as his blade. My father was in his youth a street brawler and later an angry young man, and then an angry middle aged man, and eventually an angry old man.   Wesley Moore was countercultural before there was a counterculture, seeing deep within the fabric of society an underlying hypocrisy that he detested. An idealist gone sour, he didn’t just color outside of the lines, he scribbled on the desk.

A thrill seeker, my father over the years captured a baby alligator and kept it in our bathtub (my brother David clearly remembers this even though he hadn’t been born yet). On weekends, Daddy performed death-defying aerobatic stunts in an open-cockpit plane he had refurbished himself. Sometimes he would buzz our neighborhood in Kamikaze descents that sent the treetops swaying and the neighbors scurrying to their telephones to complain to the FAA. Rumor has it than on one occasion he and Lowdnes Bailey flew under the old, old Cooper River Bridge.

He wasn’t exactly a Ward Cleaver like role model. It was sort of like having James Dean for a father.

So Bob Dylan’s line, “bent out of shape by society’s pliers” didn’t apply to Daddy. One Saturday he painted a remarkable mural of the Lesesne Gates on our dining room wall with black shoe polish, and during the height of the Civil Rights movement, much to the chagrin of those FAA-calling neighbors, he invited an abused ten-year-old African American boy to come live with us until a permanent safe abode could be found for him, not only integrating the neighborhood but our home as well.

Yes, Daddy could be a man of immense compassion and generosity. I remember one Christmas Eve when a weeping mother came to our house because Santa had nothing for her daughter, Daddy, even though we had little money ourselves, headed down to Poppleton’s Dime Store and purchased a doll and some other toys for the child.

He also adhered to an unimpeachable code of personal honor. If he had ever found a million dollars in a suitcase, he would have turned it into the police without taking a dollar.

Finally, Wesley felt a special allegiance to his employees, whom he loved and fretted over, feeling a great responsibility for their well-being.

Ultimately, though, Daddy really didn’t care what other people thought, thumbing his nose at the world (well, actually, he favored a different hand gesture to express his contempt). If Dylan Thomas had had Daddy for a father, he wouldn’t need to prompt him “to rave” or “to curse.” Over the years, I’ve heard Daddy curse Northerners, Southerners, Easterners, Westerners, dogs, cats, squirrels, flying squirrels, women drivers, men drivers, Democrats, Democrats, and Democrats.   To be honest – and if there was something Daddy detested it was false piety – he was quick to take offense and could hold a grudge – in fact he could keep several of them in air at once like one of those vaudeville jugglers we used to watch on the Ed Sullivan show on Sunday nights.

As I have grown older and experienced more of the world, both in my own life and through the literature I have encountered, I have come to see Dylan Thomas’s poem, despite its heroic grandeur and marvelous compression, to be really bad advice. In old age, death should not be something to rage against but to embrace as part of the natural progression of things, or if you prefer, as part of God’s plan. My recently deceased mother-in-law Dot Birdsong had a clipping from Ephesians 4:31-2 on her refrigerator, and although the arrangement of the words lacks the poetic power and precision of Dylan Thomas’s poem, they do, I think, suggest a better path to death’s doorway. I quote

Let all bitterness, and wrath, and anger, and clamor, and evil speaking be put away from you, with all malice, and be kind to one another, tenderhearted, forgiving one another, even as God for Christ’s sake hath forgiven you.

This has been the path of my mother Sue, who has remained true to the better-or-worse clause of her wedding vows and to the entire legion of friends she has amassed over the course of her courageous life. Whom do you know who is quicker with a laugh than Sue? Certainly, she was the greatest blessing in Daddy’s life.

However, the model of the West – and by that I mean the Europe and the Americas – is the model of the hero, the individual – Odysseus, Beowulf, Captain Ahab – and that’s the model my father embraced, not the model of quietism. Of course, the model of our own American West is the cowboy, and Daddy was especially found of cowboys, those lonely figures on horseback crooning sad songs like “Bury Me Not on the Lone Prairie.”   The only sport my father really liked was boxing, and I can remember his yelling at the television on Friday nights, barking advice to Sugar Ray Robinson or Archie Moore, “Keep that left up, keep that left up.” He himself was fighter, a rooter for the underdog, and over the years, he fought many good fights, fights against schoolyard bullies and government corruption, often cast in the role of the underdog himself. In his very last battle, he remained true to form, the ultimate underdog, bravely facing the inevitable, ignoring the advice of doctors and hospice nurses alike. One of my last images of him is smoking a cigarette in the bed where within days he would die of lung cancer.  After he’d been told to eat only liquids, I witnessed him downing four fried oysters in that very same bed.

My father chose his own path, remained true to himself until the very end, and in the words of a different poet remained “bloody but unbowed.” At long last, his tumultuous breast is quiet, and he rests in peace, though certainly no one who has ever met him will ever forget him. And though he would no doubt chide me for using this cliché, my father was truly one of a kind – “ a man, take him for all in all. [We] shall not look on his like again.”

Thank all of you for coming.

So, yeah, speaking of hypocrisy, it’s probably way past time for me to take Ephesians 4:31-2 to heart. 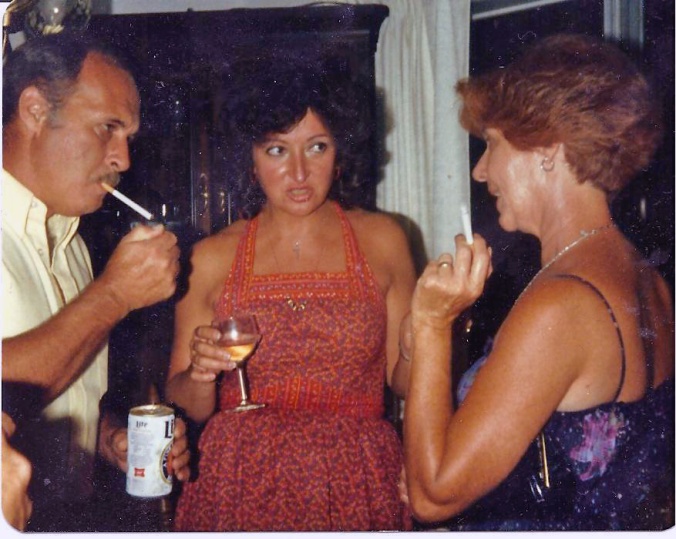 6 thoughts on “My Father Reconsidered, Sort Of”