I’m not a fan of gimmicky numbered steps that lead to success, whether it be in dating, procreating, parenting, succeeding, leading, divorcing, or dying.  Following these formulae brings to mind toddlers stacking blocks in chaotic playrooms – that big bully life ain’t gonna be placated by no mumbo jumbo, kiddos, no A-B-C/1-2-3 recipes.

And O, my brothers and sisters, believe me, I’ve suffered through more than one formulaic in-service presentation in which participants broke into small groups to ponder magically numbered ladder rungs:

A fellow who is no stranger to making an egregious mistake (thousands of lives, millions of dollars), Colin Powell, contributed to the canon with his 2012 memoir It Worked For Me: In Life and Leadership [1]

Step 1 assures us “It ain’t as bad as you think. It will look better in the morning.” [Unless as dawn arrives, you’re bobbing in a lifeboat playing scissor, rock, hammer to see who eats whom].

Step 2 sez: “It can be done!” [restoring your credit rating/stealing the Mona Lisa!] 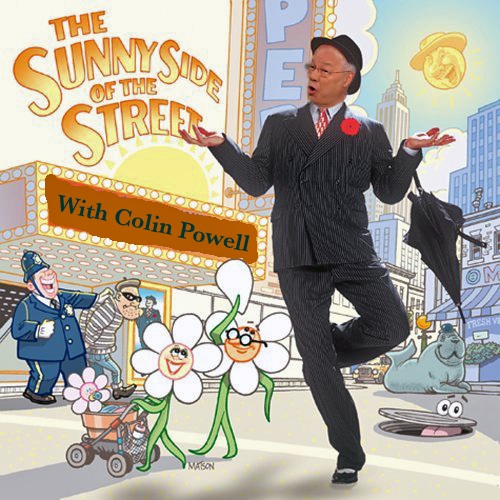 Of course, there must be some unfortunate incidents that defy optimism.

Aimee Copeland—a 24-year-old Georgia woman who has spent more than two months recovering after contracting a rare flesh-eating bacteria in a zip line accident—has been released from the hospital, officials at Doctors Hospital in Augusta said Monday.

Copeland, who had one of her legs and most of both hands amputated and endured multiple skin grafts while fighting the Aeromonas hydrophila bacteria, will now spend the next several weeks in a rehab facility, her father, Andy Copeland, said.

Well, there you go.  Certainly, this tragedy seems unredeemable.

Naysayer that I am, would harbor at least a couple of regrets.   No, I have to admit that I would feel, if not exactly cursed, desolately bitter over the tragic turn of events, the frivolous adrenaline rush of a zip line excursion costing (if not literally an arm and a leg), hands and a leg, the excruciating pain (the wound took 20 staples to close) followed by the sci-fi-like horror of bodily invasion from a zombie-like lower life form, the protracted stays in hospitals and rehab, the burden of learning to live with protheses, diminished marriage prospects, etc.

But then again, I’m a negative person. In fact, rather than scouring the wasteland for scraps of sustenance, I’d turn to master naysayers like Philip Larkin to teach me how to see in the dark.

For example, check out this little ditty of despair:

This Be the Verse

They fuck you up, your mum and dad.

They may not mean to, but they do.

They fill you with the faults they had

And add some extra, just for you.

But they were fucked up in their turn

By fools in old-style hats and coats,

Who half the time were soppy-stern

And half at one another’s throats.

Man hands on misery to man.

Get out as early as you can,

And don’t have any kids yourself.

Of course, this poem is darkly comic with its rather jaunty meter and end rhymes.

In fact, “This Be the Verse” is relatively positive compared to “Aubade.”  Here’s the last stanza of that great poem:

Slowly light strengthens, and the room takes shape.
It stands plain as a wardrobe, what we know,
Have always known, know that we can’t escape,
Yet can’t accept. One side will have to go.
Meanwhile telephones crouch, getting ready to ring
In locked-up offices, and all the uncaring
Intricate rented world begins to rouse.
The sky is white as clay, with no sun.
Work has to be done.
Postmen like doctors go from house to house.

Of course, it’s churlish to mock Aimee Copeland’s attempt to be positive in light of such misfortune.  You do what you gotta do.  I only hope, however, that whenever fresh horrors come a-calling on me, I will see them for what they are – not blessings – but blights to be endured.

What do they think has happened, the old fools,

To make them like this? Do they somehow suppose

It’s more grown-up when your mouth hangs open and drools,

And you keep on pissing yourself, and can’t remember

Who called this morning? Or that, if they only chose,

They could alter things back to when they danced all night,

Or went to their wedding, or sloped arms some September?

Or do they fancy there’s really been no change,

And they’ve always behaved as if they were crippled or tight,

Or sat through days of thin continuous dreaming

Watching the light move? If they don’t (and they can’t), it’s strange;

Why aren’t they screaming?

from “The Old Fools”

[1] To his great credit, Powell, unlike Rice, Cheney, etc., admits he was totally wrong about the Iraqi War and regrets his speech to the UN in which he presented false evidence that Iraq was developing nuclear weapons.

2 thoughts on “The Sunny Side of the Abyss”