It’s that time in the academic year when we select books for summer reading, and, of course, one of the many considerations our department weighs is the suitability of the book for the age of the reader.  Not surprisingly, puritanical parents tend to be especially frightened of fiction’s potential to somehow harm their children. Even if a novel doesn’t contain, as the movie people put it, sexual situations, it might very well deal with death.  Sex and death are the yin and yang of possible parental complaints.

Actually, I think perhaps the greatest danger that novel reading might pose lies not in the depiction of sex and death but in the extremely slim possibility that novels’  heightened realities might, like the speaker in Yeats’s “The Stolen Child,” lure impressionable readers into magical worlds that seem so much more alluring than the soulless six-lane highways and cell towers of the real world.  In other words, the danger is that the child might become a bookworm, bury himself between the covers, and withdraw from the realm of people, places. and things.

Away with us he’s going,

He’ll hear no more the lowing

Of the calves on the warm hillside

Or the kettle on the hob

Sing peace into his breast,

Or see the brown mice bob

Round and round the oatmeal chest.

For he comes, the human child,

To the waters and the wild

With a faery, hand in hand,

For the world’s more full of weeping than he can understand. 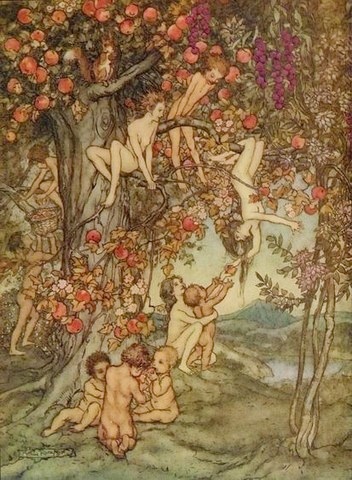 However, the problem with fairyland is that like Eden/Paradise it ultimately bores predatory primates unless, like buddhas, we can dismantle our egos and embrace the sheer bliss of existence, and if we can do that, to turn a phrase of Milton’s Satan, then “we ourselves are paradise”  – or, if you prefer Hamlet, “[we] could be bound in a nutshell and consider [ourselves] king[s] of infinite space.”

The scene depicted above, for example, looks like fun, except when you start considering the question of the aging process, estrogen and testosterone.  As Wallace Stevens wrote, “Death is the mother of beauty,” and without Death’s majesty, we’re back in the undifferentiated sexless world of amoebas.

Unlike the magical world of Yeats’s poem, the fairyland of most children’s books is fraught with conflict, which is the very stuff of fiction, as Bruno Bettelheim expounded in The Uses of Enchantment.  According to him, fairy tales with their wicked stepmothers, ogres, crones, and abandonment provide a roadmap of sorts to help children negotiate the treacherous ascent to adulthood as the tales shed a flickering light on their subterranean  unconscious sexuality.  For example, according to Bettelheim, the familiar beginning of the “Snow White” introduces children to not only the concept of death, but also to the blood link of menstruation and procreation.

As she sewed she looked up at the snow and pricked her finger with her needle.  Three drops of blood fell into the snow.  The reed on the white looked so beautiful that she thought to herself, “If only I had a child as white as snow, as red as blood, and as black as the wood in this frame.”

Soon afterward she had a little daughter who was as white as snow, as red as blood, and as black as ebony wood, and therefore they called her Little Snow-White.  And as soon as the child was born, the queen died.

There you have them both– sex and death.

Several years ago I was congratulating an acquaintance on her daughter’s well-received first novel, and the mother said wistfully that she wished her daughter had written something less controversial, something more like, and she specifically cited this title, “Hansel and Gretel.”   In other words, a narrative about childhood abandonment and cannibalism is less horrible than a narrative about the various sexual encounters one experiences coming of age in a late empire.

Snow White, as we switch from Freud to Friedan, agrees to become a chaste hausfrau rather than take her chances wandering the wolf-prowled woods.  Yet, like her tower-incarcerated cousin Repuntzel, the pull of a sexual partner will liberate her from the narrow confines of chastity, in Snow White’s case, a glass coffin. Repuntzel, interesting enough, is the rescuer rather than the rescued as her tears of compassion restore the eyesight of the feral prince who has been wandering Oedipus-like in a barren desert.

Essentially Repuntzel is the story of how two become one and then three.

Of course, it’s not fairy tales that’s making the top-ten challenged books lists in high school but less subliminal fare like Love in the Time of Cholera, The Color Purple, and A Clockwork Orange. Actually, excellent literary novels tend by their very nature to be moral because they portray life realistically – promiscuity doesn’t bring happiness, avarice creates misery, and honor ennobles.  Also, good books, whether they contain sexual situations or violence, provide vicarious experience for the uninitiated.

In our discussion about summer reading last Wednesday, our department chair wanted to have his seniors read Margaret Atwood’s The Hand Maid’s Tale.  I lauded the novel but warned him that when I had been chair, I eventually removed the novel because of constant complaints from parents in consecutive years. One mother complained bitterly about how depressing the novel was and thought it dangerous for adolescents to be exposed to so much negativity.

Here’s a snippet from the letter I wrote her:

It is a legitimate question to ask why so much contemporary literature is so negative.  After all, looking towards Hollywood one rarely ever encounters an unhappy ending. However, unlike most movies, great literature provides students with a realistic portrait of the world and endows them with the vicarious experience that comes with experiencing the struggle, triumphs, and, yes, defeats of its characters.  For example, Hamlet — about as tragic a work of literature as you’ll ever encounter — provides a realistic portrait of a fallen father, a mother’s obscenely hasty remarriage, the dissolution of a love affair, and about as many corpses as will fit on a stage.  Yet, when we finish reading (or seeing) the play, we’re not depressed but can share in the nobility of a person’s battle against “a seas of troubles” and say with Hamlet “what a piece of work is a man, how noble in reason.”  Moreover, we can perhaps learn from Hamlet’s mistakes.  They have become a part of our experience because Hamlet is to us a fellow human being.

As far as The Hand Maid’s Tale is concerned, Margaret Atwood has said she wrote the novel in light of the subjugation of women in Iran and Afghanistan.  She does, I think, a masterful job of recreating that experience for American and European readers.  It’s much easier to emphasize with Offred, the protagonist, because she is of our world. We experience her shame and helplessness with her.  In addition, the central of the novel is a positive one: human love is unconquerable and very much worth dying for.

Ah, there it is again, that word dying.

She says, ‘But in contentment I still feel

The need of some imperishable bliss.’

Death is the mother of beauty; hence from her,

Alone, shall come fulfillment to our dreams

And our desires. Although she strews the leaves

Of sure obliteration on our paths,

The path sick sorrow took, the many paths

Where triumph rang its brassy phrase, or love

Whispered a little out of tenderness,

She makes the willow shiver in the sun

For maidens who were wont to sit and gaze

Upon the grass, relinquished to their feet.

She causes boys to pile new plums and pears

On disregarded plate. The maidens taste

And stray impassioned in the littering leaves.

I would also add that a life of reading great literature helps in a way to face death’s awful but necessary reality because as Hamlet himself says, “If it be now, ’tis not to come. If it be not to come, it will be now. If it be not now, yet it will come—the readiness is all.”

By the way, we are going with The Hand Maid’s Tale.

4 thoughts on “On Literary Fiction, Fantasy, Sex, and Death”