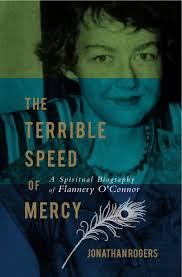 “As far as I am concerned,” she said and glared at him fiercely, Christ was just another D.P.”

Mrs. May to Father Flynn in Flannery O’Connor’s “The Displaced Person”

The most heartbreaking of all Flannery O’Connor’s stories, “The Displaced Person,” seems particularly poignant given the ban on Muslim refugees instated last weekend.[1] Set right after WW2, the story dramatizes the attempted assimilation of a Polish refugee into bigoted backwoods Georgia.

As David Griffith points out in his excellent essay on the story in The Paris Review:

O’Connor takes her title from the Displaced Persons Act, which, between 1948 and 1952, permitted the immigration of some four hundred thousand European refugees into the United States. President Truman signed the bill with “very great reluctance” for what he saw as its discriminatory policy toward Jews and Catholics: the Act stipulated that, in order to be eligible, one must have entered Germany, Italy, or Austria before December 22, 1945, which, according to Truman, ruled out 90 percent of the remaining Jewish people displaced by the war. Similarly excluded were the many Catholics who’d fled their largely Communist countries after the December 22 deadline.

“The bad points of the bill are numerous,” Truman wrote. “Together they form a pattern of discrimination and intolerance wholly inconsistent with the American sense of justice.” He called the decision to enforce the December 1945 deadline “inexplicable, except upon the abhorrent ground of intolerance.”

In the story, O’Connor’s displaced person’s work ethic so far exceeds that of the slothful, under-compensated blacks and whites who work on Mrs. May’s farm that he threatens their livelihoods. Worse than that, he violates Southern taboo of racial purity when tries to contract a marriage between a black field hand and his young Polish cousin languishing in a camp back home.

When an outraged Mrs. May confronts Mr. Guizac about the proposed interracial marriage — “You would bring [that] poor innocent child over here and try to marry her to a half-witted thieving black stinking nigger” — he says quite sensibly, “She no care black [. . .] She in camp three year.”

In the end, xenophobia and bigotry triumph over charity as the displaced person – the one good man to be found in that collection called A Good Man Is Hard to Find – is done away with.

She had felt her eyes and Mr. Shortley’s eyes and the Negro’s eyes come together in one look that froze in collusion forever, and she heard the little noise the Pole made as the tractor wheel broke his backbone.

Obviously, refugees rank as some of the planet’s most vulnerable souls, driven from their homelands — from their familiar cultures — into alien worlds of gibberish, incomprehensible mores, and worse.

The refugees turned away this weekend had undergone as much as 48 months of vetting from several agencies and pose virtually no terrorism threat whatsoever. No one from the banned countries has ever committed a terrorist attack on US soil – unlike citizens from Saudi Arabia, Lebanon, and Pakistan, who weren’t included in the ban, people from countries where Trump has business interests.

Imagine the refugees’ heartache after so much suffering, boarding a plane headed for their dreamed of destination, only to be turned away and sent on a long, long flight back to perdition.

Of course, it’s not surprising that the sadist Trump would shatter the hopes of the dispossessed to score political points. After all, as many have pointed out, he’s cruel, hosted a reality TV show in which he lovingly embraced the chance to humiliate people with the words “you’re fired.” No one would expect him to take refugees’ plights to heart.

On the other hand, you might think Paul Ryan, who embraces his Catholicism the way Steve Bannon does his booze, would take Jesus’s words more to heart. But Ryan has come out fully supporting the ban.

Oh, by the way, what was the percentage of evangelists’ votes Trump garnered?

[1] The Trump’s claim that it’s not a ban on Muslims rings hollow when the administration offers exemptions to Christians and Jews.

3 thoughts on “Why Paul Ryan Should Read Flannery O’Connor”