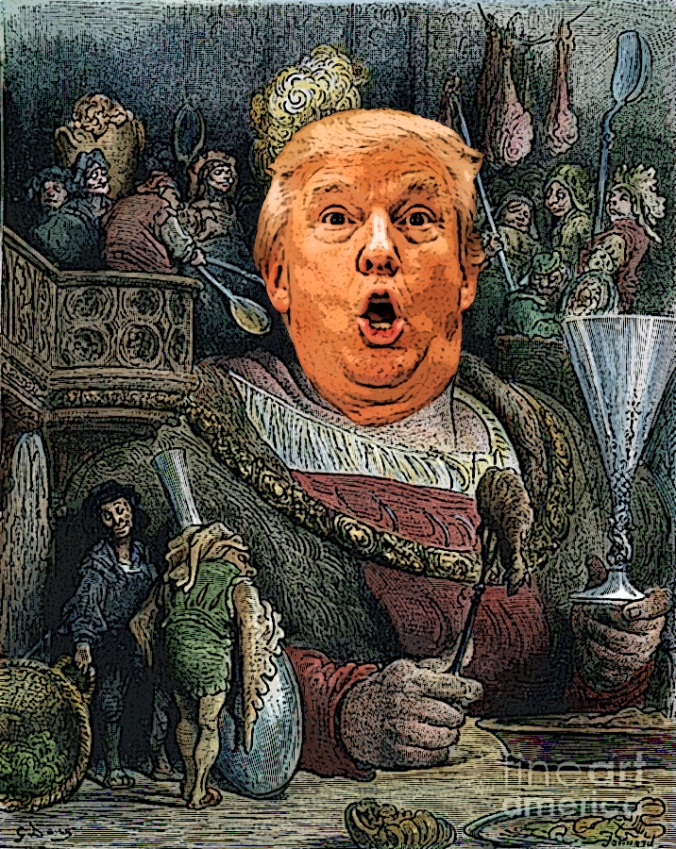 Traditionally satire has been classified as Horatian or Juvenalian in honor of two ancient Roman practitioners of the genre. Horace (65-8 BCE) cleverly but gently mocked Roman opinions and institutions that he considered worthy of ridicule. In Horatian satire – Geoffrey Chaucer falls into this category – you get the feeling that overall the satirist generally is fond of humankind (in spite of itself) but wishes to poke fun at its foibles, perhaps in hopes of ameliorating them. Almost all of non-literary contemporary satire falls into this category. For example, Mad Magazine, The Daily Show, and Saturday Night Live exemplify characteristics of Horatian satire, particularly in their employment of exaggeration and irony, holding up, as it were, a funhouse mirror to human nature.

Take SNL’s satires of Hillary Clinton and Donald Trump, for instance. Despite exaggerating those politicians’ personas, the skits do so with good humor. The writers portray Hillary as incredibly calculating and Trump as a bit of a buffoon, but certainly neither comes off as monstrous (despite thin-skinned Trump’s overreactions) as they very well might in a Juvenalian satire.  The fact that Clinton herself has appeared in some skits underscores the “gentleness” of the satire.

Unlike Horace, whose satires might be likened to the clucking of a tongue, Juvenal’s[1] satires are more like spitting into the face of the target. Juvenal held humankind in utter contempt, like his artistic soul brother Jonathan Swift, and employed scatology – images of excrement, disease, and filth – to transform the object of the satire into a monster. In Juvenalian satire, the motive is not so much to emend but to mock, as Swift does in his portrayal of the Yahoos in Gulliver’s last voyage. The ill-fated Charlie Hebdo satires on Muhammad offer another example of Juvenalian satire’s mean-spirited mockery.

If Trump finds the rather light touch of SNL’s satire outrageous, let’s hope he never encounters a Juvenalian satirist’s assessment of his character.

For example, a Juvenalian satirist might come up with the following Trump Insult Kit (based on those Shakespearian insult kits you can find on the Internet). Essentially, these “kits” have three columns, the first two containing adjectives culled from Shakespeare’s plays and the third containing nouns. Scanning the columns, you choose adjectives from the first and second columns and attach them to a noun of your choice from the third column, coming up with something like, “Ye churlish, toad-spotted miscreant.”

Rather than copping words from Shakespeare’s plays, however, the Juvenalian satirist (who shall remain nameless) that came up with the Trump Insult kit mined the scatological recesses of the gothic Anglo-Saxon subterranean wing of his or her vocabulary to choose caustic, ugly words to ridicule Trump’s appearance – his Kraft-cheese colored epidermis, his corpulence, etc. The idea is someone this hideous needs to be described hideously.  It’s as if the satirist has gone beyond stooping to Trump’s level but has out Trumped Trump in a vulgar way that brings to mind Rabelais, another Juvenalian satirist.

Choose a term from each column to create a salutation for your next reply to one of Trump’s tweets:

We suggest you mix and match on different days for variety’s sake: “You, tangerine-tinted, tick-ridden boar’s snout” on Monday but then perhaps “You swag-bellied, triple-chinned scum-slurper on Friday.

Ultimately, Horatian satire tends to be more palatable for most audiences because, let’s face it, Juvenalian satire is disgusting  —  it’s meant to be.  The prudish consider it crude, in bad taste, which ultimately is the point.

Think of it as a Lear-like lacerating scream penetrating the desert air.  It might not help in any practical way, but releasing righteous indignation is cathartic and in that sense healthy — at least for the satirist herself.

2 thoughts on “Trump as Satiric Butt”