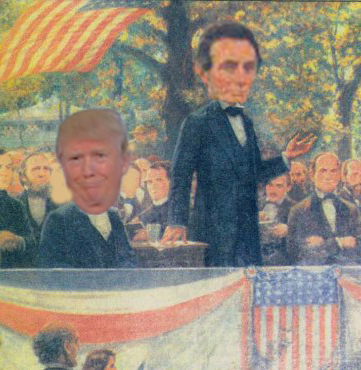 Trump: I like Abe Lincoln. He’s a nice enough guy, though he’s ugly as homemade sin. What’s the matter with him? Does he have rickets or something? And that mole. Jesus. You think he’d have that thing removed. I’ve heard rumors about other causes of his abnormal physique, but we’re not going there. I can’t imagine a prostitute willing to sleep with someone that ugly, so I don’t believe the syphilis rumors. But then again, who knows?

Lincoln: MY FELLOW-CITIZENS: When a man hears himself somewhat misrepresented, it provokes him-at least, I find it so with myself; but when misrepresentation becomes very gross and palpable, it is more apt to amuse him. Alas, even Mr. Trump’s insults are inaccurate. Rickets causes stunted growth, and although I have been described as “thin as a beanpole and ugly as a scarecrow,” no one has ever accused me of being short.

Furthermore, Mr. Trump speaks as if he possesses the beauty of Adonis, but I suspect that neither one of us is going to win a beauty contest, so I suggest we turn the discussion to matters more concerning to our voters like the state of the economy and the challenges we face abroad.

Trump: Look the economy reeks as bad as the outhouse back behind the shanty Rickety Abe was born in. It stinks to high heaven. We’re going fix that. Let me tell you, people, I’ve made a lot of money, I know how to make money, I’m really, really smart. We have idiots running the country. That’s the problem. We don’t need a lawyer running the country. We need a businessman, let me tell you.

Lincoln: Although the economy is not roaringly robust, it has grown steadily, albeit modestly, for 72 straight months, and I need not thrash the dead horse of what led to the disastrous decline of ’08, the charlatan sham of trickle down economics enacted simultaneously with two disastrous wars. Cutting taxes while paying for armaments and raising an army, is not merely foolish, it’s deranged, yet Mr. Trump’s economic plan calls massive tax cuts for the wealthy and escalating our presence in the Middle East, a repetition of the disastrous policies of the past.

Trump: Let me assure you, Rickety Abe, that what I plan to do in the Middle East is not going to cost us much. I’m going Col. Kilgore on their asses from above. By the time my first term is over, they’ll be casinos and golf courses in Kandalar —

Lincoln [interrupting]: Kandalar is in Azerbaijan; don’t you mean Kandahar, which is Afghanistan? We certainly don’t want to be bombing one of our international friends –

Trump [interrupting]. Look, the man can’t even grow a decent beard. Look at him, a walking advertisement for birth control . . .