I saw with my own eyes the Sibyl at Cumae hanging in a cage, and when the boys said to her: “Sibyl, what do you want?” she answered: “I want to die.”

From man’s blood-sodden heart are sprung
Those branches of the night and day
Where the gaudy moon is hung.
What’s the meaning of all song?
“Let all things pass away.”

Death is the mother of beauty, mystical,
Within whose burning bosom we devise
Our earthly mothers waiting, sleeplessly.

In the catalogue of alienations we Late Empire citizens suffer – estrangement from nature, God, our neighbors, ourselves – our estrangement from death is often omitted. We no longer encounter death on a daily basis. Most of us don’t raise chickens to wring their necks, pluck their feathers, excise their entrails. When our loved ones die, we no longer remove their clothes, wash their corpses, and dress them for one last family photo in the parlor.

Of course, our lack of exposure to death makes it much easier to lock it away down deep in the cellar of our consciousness, which might not be such a bad thing given that nothing’s more life negating than death obsession. On the other hand, our isolation from the cold hard facts our ancestors dealt with – butchering animals, infant mortality, etc. – might have contributed to a delusion many seem to suffer, i.e death is unnatural.

A few years ago, an acquaintance’s father, a man approaching ninety, was lying comatose in a hospital. Each day, on Facebook this acquaintance updated his father’s situation, which, not surprisingly, was rather uneventful – the opening and closing of an eye, a sense from a nurse that the old man experienced discomfort when bathed. My acquaintance and visitors read the Bible to him aloud as they sat and prayed for a miracle. This acquaintance battled his father’s physicians who wanted to transfer him to hospice care while the son perceived opening an eye as a harbinger of “the complete recovery” for which he so ardently prayed.

Most of the Facebook commentators were essentially enablers writing messages like “Sounds very encouraging!!! The doctors could be totally wrong……the body can heal in ways that only God knows” or “That’s great. God is in controll” (sic) or “God is the ultimate physician:-).”

A contempt for science and doctors ran through those Facebook posts, and the commentary that followed. No wonder people don’t believe in evolution or global warming if they believe a comatose man dying of an infection brought on my the removal of a cancerous lung tumor could very well attain a complete recovery and enter robustly into his ninth decade. 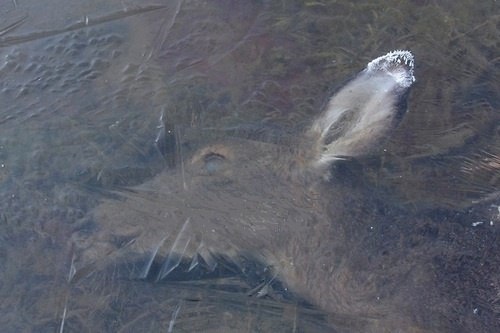 dead doe in a frozen pond in North Carolina

However, much more horrible than death would be eternal life in an ever aging husk of a body. Not only did the Sibyl at Cumae consider it a drag (see above), but we also have corroborating evidence from Chaucer’s “The Pardoner’s Tale.” When a trio of churls accost an ancient man and ask him why he still has the gall to remain alive, he replies,

Not even Death, alas! my life will take;
Thus restless I my wretched way must make,
And on the ground, which is my mother’s gate,
I knock with my staff early, aye, and late,
And cry: ‘O my dear mother, let me in!
Lo, how I’m wasted, flesh and blood and skin!
Alas! When shall my bones come to their rest?

Why, I wonder, would such devout Christians want to forestall the eternity of bliss that awaited that good man? And the father was a good man, a great provider devoted to his family and his God.

The answer, of course, is love.  Most of us love our parents.  We don’t want them to go.  I miss my own father’s sardonic witticisms, my mother’s hoarse cackle of a laugh. My acquaintance devotedly loved his father and didn’t want to think of living life without him.

Is that so wrong?

To everything there is a season
And a time to every purpose under heaven.

Like I said, our aged loved ones’ passing is melancholy, and we miss them when they’re gone. I have had a couple of dreams about my mother recently, and I awake missing her. Nevertheless, her time had come, and she was rather fortunate given that she didn’t have suffer for long the feebleness that Larkin descries in “The Old Fools.”

What do they think has happened, the old fools,
To make them like this? Do they somehow suppose
It’s more grown up when your mouth hangs open and drools,
And you keep on pissing yourself, and can’t remember
Who called this morning? Or that, if they only chose,
They could alter things back to when they danced all night,
Or went to their wedding, or sloped arms some September?
Or do they fancy there’s really been no change,
And they’ve always behaved as if they were crippled or tight,
Or sat through days of thin continuous dreaming
Watching light move? If they don’t (and they can’t) it’s
strange: Why aren’t they screaming?

Yep, there are worse things than death.

5 thoughts on “The Mother of Beauty”