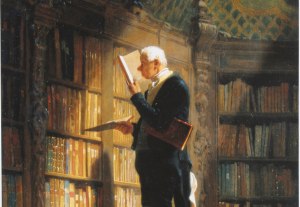 Actually, I’m probably one of the few English teachers who discourage students from mining Thesauruses for synonyms.[1]  Too often, I’ve found, students select unfamiliar words that don’t quite work in context.

He whimsically set the rodent trap with refrigerated smores.

I suggest students only resort to a Thesaurus if they know the perfect synonym – if it’s on the tip of a neuron connected to the tip of their tongues. In other words, if after racking your brain, you can’t quite conjure that perfect word, give in to the Thesaurus, but if you don’t find it there, only choose an alternative from your speaking vocabulary.

Oh, but for a writer, finding the perfect word is a nice an exquisite problem to have in the expansive, supple, exalted, vulgar language of English, a hybrid/mixed breed of German, Norse, and French.

[If you click here, you can watch I-and-I deliver a  3 minute, 56 second lecture on the history of English at the famous Folly Beach dive Chico Feo.]

In other words, English is a mutt – or to use an alternative French-based locution, the product of miscegenation – and that’s propitious/a good thing because it provides a wealth of diversity.

Of course, when it comes to selecting the right word, context is everything. French words tend to soften situations, words of Anglo-Saxon to tell it like it is.

Pity the serfs sweating blood in the moor; envy the bon vivants perspiring champagne at the Belgian spa.

It’s just a class thing – the French aristocrats perspired and urinated, the Anglo-Saxon peasants sweated and pissed. Back in the days of testosterone, my mother once overheard me saying “pissed off” and chastised/yelled at me for my use of vulgar language, and I told her that I’d bring in a jar of piss and one of urine and that if she could distinguish one from the other, I’d quit pissing altogether.

Piss is onomatopoetic – like whiz, tinkle – playful. Urine, not so much.

And then, you throw American English in the mix – and the choices become even more complicated as you try to determine/figure out if lonely or lonesome is the word that best fits the situation you’re attempting to capture/nail.

NOT: After the debacle in the park, Miss Brill felt for the first time the enormity of her lonesomeness.

BUT: The coyote’s howl deepened the lonesomeness of the desolate prairie.

So, if your hateful, bile-ridden uncle’s from London, he might be a misanthrope, if he’s from Boston, a curmudgeon, but if he’s from my home town Summerville, he’s nothing but a mean ol’ cuss.

You get to decide, but stick to the words you know, and when in doubt, aim low.

Class over. I have to go powder my nose.

[1] Forgive the quaint “mining Thesauruses,” but “clicking on a Thesaurus website” lacks that pedagogical, pretentious patina of dust.