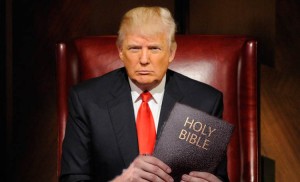 Hey, I’m an author. Did you know I was an author? Well, I am, and I’ve written the second greatest book out there, The Art of the Deal. If you haven’t read the book, you need to grab a copy because it’s tremendous; there’s a tremendous amount of wisdom in that book, but you know what, there’s even a better book out there, and that’s the Bible. Nothing beats the Bible. It’s my favorite book. And this might surprise you, but the Bible is an excellent textbook when it comes to showing you how to make a deal. Let me tell you, the God of Hosts was no slouch when it came to making a deal.

Ever heard the story of Dinah and Shechem? You can find it in the 34th Genesis. Now this is the kind of story they skip over in Sunday school because it’s not politically correct, but you know what? I’m sick of political correctness. I’m going to share this neglected story with you because it’s one of the greatest deals ever made in the history of the world.

Okay, Dinah’s the daughter of Jacob and Leah, and on her way to visit some women, Hamar’s son Shechem sees her, finds her attractive, and rapes her. Now, I’m against rape because I love women. I cherish them. Unless they’re whores like Jezebel or bitches like Noah’s wife or pigs like Roseanne Barr. Anyway, that’s not the norm. Most women are wonderful, and anyway, rape’s a terrible thing.

But get this. This rapist Shechem falls in love with this Dinah, the babe he’s raped, and his old man Hamar approaches Jacob with a deal. I’ll go ahead and quote from the Contemporary English Version. It’s much better. None of those thees and thous and smiteths and all those archaic words that irritate the hell out of you. You agree, right? Of course, you do. Archaic words have no place in the modern world. Anyway, here’s the scoop: Here’s what Hamor says to Jacob:

My son Shechem really loves Dinah. Please let him marry her. Why don’t you start letting your families marry into our families and ours marry into yours? You can share this land with us. Move freely about until you find the property you want; then buy it and settle down here.

Shechem’s right there with his old man. The gall of these people, asking favors from the father of a daughter you’ve just raped. It’s terrible. Even Bill Clinton wouldn’t do something like that. Anyway, Shechem adds, ““Do this favor for me, and I’ll give whatever you want,  anything, no matter how expensive. I’ll do anything, just let me marry Dinah.”

Okay, guys, if you’re ever trying to make a deal, never say you’ll do anything. Makes you look weak. It’s pathetic. You gonna get took. Just watch and see. Here’s what Jacob’s sons say:

Well, Hamor and Shechem swallow the bait hook, line, and sinker. They decide to talk all the men of the tribe in getting circumcised so they all can intermarry with the Israelites, thinking they could get access to their crops and flocks, to create a merger so to speak.

But here how it goes down. Again, I’ll let Moses do the talking.

Three days later the men who had been circumcised were still weak from pain. So Simeon and Levi, two of Dinah’s brothers, attacked with their swords and killed every man in town, including Hamor and Shechem. Then they took Dinah and left.  Jacob’s other sons came and took everything they wanted. All this was done because of the horrible thing that had happened to their sister. They took sheep, goats, donkeys, and everything else that was in the town or the fields.  After taking everything of value from the houses, they dragged away the wives and children of their victims.

Now that’s what I call one great deal. Not a lousy 50/50 proposition. Not an eye for an eye, but a village complete with farms and widows and slave children for a hymen. Like I say, I’m not for rape, but you have to admit the compensation for this deal was out-of-sight.  Maybe if we had some deal makers like Jacob’s sons in Washington we wouldn’t be getting taken to the cleaners by China and Mexico.  It’s a disgrace.

Okay, that’s it for today. I got to go out and make America great again.  But join me next week, and we’ll talk some more Bible. King Nebuchadnezzar. He was rich. Maybe not as rich as me but rich. I’ll talk all about him next time. 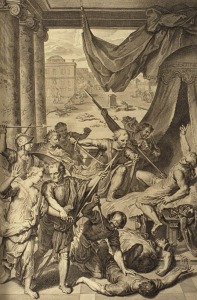