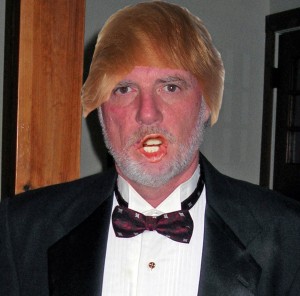 What the success of Donald Trump’s presidential candidacy has eloquently demonstrated is that Americans crave simple, no nonsense solutions to our problems.

Take his plan to cleanse the country of the infestation of illegals, those predatory, pick-pocketing, often pregnant, anchor-casting Mexicans slipping through that porous sieve of a shitty excuse of a wall that fails to protect us from their nefarious plots to mow our lawns and frame our houses.

As soon as their pregnistas start dilating, they dog paddle across the Rio Grande, and the next thing you know, they’ve given birth to a US citizen, who eventually ends up hogging space in an emergency room, getting sewn up after his gangland knife fight, all on Uncle Sam’s dime.

Not to mention that once they’re established, they vote for the Democrat party.

Certainly, a country that has put men on the moon can set up a system to identify criminals who have entered our country illegally and deport all 11 million of them.

Although Candidate Trump hasn’t exactly worked out the details, he’s smart, rich, and successful, so don’t be surprised if for PR purposes he opts for Greyhounds instead of boxcars.

All of this has gotten me to thinking about similar problems we face in coastal South Carolina. Nowadays, getting a parking space in downtown Charleston within a mile of your desired destination is as unlikely as drawing a royal straight flush.

As I inch my way homeward each afternoon down Folly Road, like a blood cell squeezing along a clogged artery, I’ve noticed a proliferation of license plates that don’t feature palmettos trees or crescent moons. Each day, more and more cars appear; new stop lights are popping up like mushrooms, all because of an unsustainable influx of outsiders.

No, these people impeding my progress aren’t foreigners in the multi-national sense, but the majority of them are not natives of South Carolina. They don’t sound like us, they don’t think like us, and they don’t pull for the Gamecocks or Clemson. In other words, they don’t belong here. They’re taking over, I tell you, and mark my words, as Bruce Springsteen once sang, “Soon everything we’ve known will all be swept away.”

Today the Confederate flag, tomorrow octoroon Klansmen. Don’t be surprised, fellow native South Carolinians, if your grandchildren say “you guys” instead of “y’all.”

Thanks to Donald Trump, I’ve come up with a plan to take back our South Carolina, i.e., rid the Palmetto State of people-from-off. I’ve sent a letter to my state representatives demanding that they introduce legislation to implement my two-step plan to restore South Carolina to its pre-influx purity. I promise you, fellow natives, getting a parking space downtown will not be a problem if this plan is implemented.

It has two parts. The first step, of course, is to secure our borders. I suggest we construct a massive combination of Hadrian’s Wall and a tollbooth that wraps around our pie-shaped state. Anyone entering the state will have to pay a hundred dollar toll. What about people flying in you ask? Don’t worry. I’ll figure something out. I’m very smart.

And, hey people, I’m getting Ohio to pay for the wall!

The second part is simply to invite non-natives to self-deport, and if they refuse, to utilize the National Guard to forcibly remove them.

Of course, this change will result in some short-term inconveniences (empty condo complexes, mass bankruptcies, the closing of the Air Force Base), but we eventually conquered Reconstruction, didn’t we? We need to take the long, not the short view. We’re talking about our way of life.

Sure, things might get a little lonely down here on the lane where I live. My next door neighbor Jim will have to go, and Bobby and Nina, also Claudia, who lives two houses down, and the Weimanns and their two beautiful daughters, and of course, Chico Feo will have to close, and the Jack of Cups.

Oh yeah, and my wife, Judy Birdsong, she was born in Georgia.

That leaves me, and only me.

Come to think of it, xenophobia might not be such a great idea in a nation of immigrants.