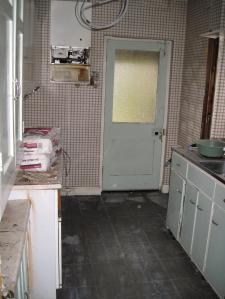 I’ve lived in some spectacular dumps in my life, especially during my days as an undergraduate and graduate student.

For example, my bedroom in my first off-campus apartment was more or less the kitchen, the bed separated from WW2 vintage appliances by a breakfast bar. My housemate Stan had found the two-room apartment in late August in a subdivided two-story house on Henderson Street just up the hill from the Nursing Building that was under construction.

Actually, I had the premier sleeping spot because Stan’s bedroom was also the “living room,” the room you stepped into when you entered the apartment. Stan was the bassist in a band called Buddy Roe, and his post gig “friendships” offered me many opportunities to catch him and a companion in flagrante delicto as I returned from classes at the unholy hour of nine, ten, or eleven a.m., not to mention noon, or one, two, or three p.m.

I don’t know why we never figured out a sign on the door might have prevented my intrusions. Then again, a sign that read “Do Not Disturb” would more or less proclaim to the other occupants what was going on, but that still seems preferable to having your coitus interrupted.

Gas stoves, one in each room, provided the heat, and lighting those suckers for the first time proved a real adventure. One night I inadvertently destroyed Stan’s 300-plus LP collection. Need I mention that there were no sprinklers or fire escapes, that the wood was rotting, that the entire mold-ridden structure smelled like a cross between the River Styx and a long-enclosed attic? 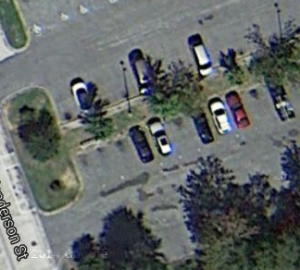 where the Henderson Street house once stood

That year in my Milton class I met my next-to-be housemate, who enjoyed much nicer digs on Confederate Avenue. Mike not only was an excellent scholar, but he also owned furniture that looked downright bourgeois, so at the end of the spring semester, I returned to Summerville and put him in charge of finding us a place, which he did, seven miles from campus in a sturdy two-bedroom cottage nestled squeezed between two convenience stores on Fairfield Road, a four-lane highway.

Although the “space” was nice, as they say, getting to and from school meant riding city buses, and when the buses quit running at eleven, that meant hitchhiking or stumbling seven miles on foot through one sketchy urban area after another.

Warren back in the day

That December, Mike left school suddenly after the first semester, so I teamed up with former sophomore roommate Warren Moise, and we moved into a miniscule mill house up North Main, even further away from school than Fairfield Road. The bad news was that the neighbors hated our long-haired asses. Once, in the wee hours when I was alone, someone banged meancingly on a side door of my bedroom that led outside.  I went out to investigate and heard someone whistling a tune. The Night of the Hunter meets Animal House. A couple of weeks later, a crew burglarized us, poured our food out onto the kitchen floor, and as a final, sociopathic touch, shat thereupon.*

We got the message.

Coincidentally, my former next-door neighbor from Henderson Street, Jim, was recruiting people for a great house he had found just off campus, so Warren and I went in with six others and rented 1879 Green Street, a veritable mansion compared to my previous domiciles. (It was a good bit seedier than it appears in the photo below courtesy of Google maps). Of course, only three were supposed to live there, but we never got caught. The house did get busted in a citywide drug sweep our second night there, but I wasn’t at home so could save my pre-trial intervention card for a later date. I will say, however, the officers from SLED left the joint looking a lot like the burglars had the mill house.

The very best news was that in my third year on Greene Street, I met Judy Birdsong, who, of course, lived in a nice apartment on Deerwood Drive, so my days of dire poverty were coming to a fruitful end.

The good news is that living in dumps is sort of romantic when you’re young and don’t know any better — and as long as you’re the only vermin living there.

*Forgive me; I’ve been abridging and editing Chaucer 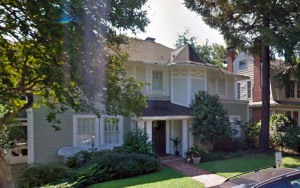