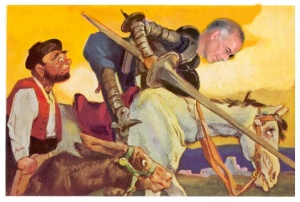 David Brooks, whom I like personally from his television and radio appearances, but with whom I rarely agree, has a thought-provoking but quixotic op-ed piece in yesterday’s Times.

Brooks begins with a blunt statement of fact: “Christianity is in decline in the United States.” He goes on to point out that its “gravest setbacks are in the realm of values,” particularly in the realm of sexual permissiveness. Premarital sex is virtually universal, out-of-wedlock pregnancy no longer a cause for shame, adultery considered a trivial misstep, etc.

On the homosexual side, not only does gay love dare speak its name, but it shouts it out, Martha-Reeves-and-the-Vandellas style. Gay lovers have stepped from the shadows of alleyways and stroll openly holding hands on the sunny side of our streets, their streets, and to that, most of us — and least the people I hang with — shout Hallelujah!

Of course, others disagree. Brooks quotes Rod Dreher, author of How Dante Can Save Your Life, who suggests that it is “time for Christians to strategically retreat into their own communities, where they [can] keep ‘the light of faith burning through the surrounding cultural darkness.’” Dreher adds, “We have to accept that we really are living in a culturally post-Christian nation. The fundamental norms Christians have long been able to depend on no longer exist.”

Of course, Christianity is complicated. Jesus himself never considered himself a Christian. After all, on the night before his execution, he was celebrating Passover.

Although Christianity and Islam have incorporated elements of Judaism, they aren’t syncretic in the sense that they don’t see Yahweh, Jesus, or Allah as cultural masks for a universal deity that transcends tribal affiliations. In other words, fundamentalists in these religions mistake their myths for history, and this literalism has been [gross understatement alert] problematic (cf. the Inquisition).

Science is the enemy of literalism. Obviously, Noah would have a hard time rounding up penguins in Mesopotamia. Less obviously, scholars agree that Judaism was originally a polytheistic religion and that there is virtually no archeological evidence of an Egyptian captivity. On the Christian side, N.F. Gier writes in God, Reason, and the Evangelicals:

There is no record of Caesar Augustus’ decree that “all the world should be enrolled” (Lk. 2:1).  The Romans kept extremely detailed records of such events.  Not only is Luke’s census not in these records, it goes against all that we know of Roman economic history.  Roman documents show that taxation was done by the various governors at the provincial level.[1]

So some people, naively in my view, tend reject the mythic truth of Judaism and Christianity when they dogmatically argue that the bible is literally true. Millennials especially have little patience with ancient edicts that restrict their behavior. They dismiss it all as “a big bunch of bullshit.”

Enter genetics. I believe that the great shift in US citizens’ acceptance of homosexuality lies in its not being a choice but a biological imperative. Commonsense tells us that we don’t choose our sexual orientations. No one remembers that special day during puberty when she decided to opt for boys instead of girls. So it follows that if people are hard-wired to love certain sexes, why not allow people of both sexual persuasions to make lifelong commitments? Doing less seems uncharitable, and in one sense, un-Christian.

Brooks urges Christians to abandon their “decades-long culture war that has been fought over issues arising from the sexual revolution” and to “consider a different culture war, one just as central to [their] faith and far more powerful in its persuasive witness.”

In other words, he urges the religious right to become missionaries in their own culture. I love the idea, but alas, as many of the commentators on the piece point out, this solution ain’t going to happen.

After all, Nikki Haley, Bobby Jindal, and Rick Perry attend Christian-themed prayer rallies but in the name of ideology refuse to expand Medicaid in their states, essentially preventing their indigent populations from receiving healthcare.

But, yes, Mr. Brooks, I agree. A cultural war that “is s more Albert Schweitzer and Dorothy Day than Jerry Falwell and Franklin Graham, more Salvation Army than Moral Majority” is a concept devoutly to be wished.

[1] I fault the copy editor for that inelegant sentence, which could have been cast: “Roman documents show that various governors at the provincial level levied taxes.”