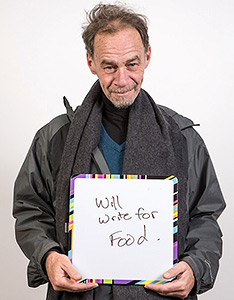 In the wake of the the death of David Carr, the New York Times, his employer, ran a series of reverential articles extolling his wit, reporting skills, craftsmanship, generosity, work ethic, etc. He was by all indications what my friend Jim Klein calls a “cat” — short for “hep cat” — what Cab Calloway defines in his Hepster Dictionary as “a guy who knows all the answers, understands jive.”

While I was checking out Carr postmortem, I ran across a video [VIEW HERE] of him and his colleague, film critic AO Scott, discussing “guilty pleasures” — in Scott’s words “the stuff you like but maybe you don’t want other people to know you like.”

Carr and Scott then roamed the Times Building “on a dirty Safari,” as Carr put it, eliciting from their colleagues embarrassing indulgences that no self-respecting cat would ever admit to, like listening to on a regular basis the Archies’ song “Sugar, Sugar.” 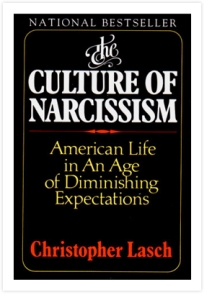 I bring up guilty pleasures because I’m re-reading Christopher Lasch’s The Culture of Narcissism, a book I once defended in a published letter in Newsweek, a book that President Jimmy Carter cited in a widely panned speech accusing his countryman of suffering from a malaise, a book I had hoped in this second reading would prove Lasch a forgotten prophet, but, alas, Lasch’s cultural analysis turns out to be self-righteous, all-knowing, hectoring, in short, a heaping pile of Freudian gobbledygook.

Like when you read about a strange exotic disease and start thinking you’re experiencing its symptoms, I’m fairly certain now that me-myself-and-I suffer from a narcissistic personality, that I’m an utterly self-absorbed asshole in constant need for affirmation from others, someone who has constructed a way-too-cool persona to cover his pathetic insecurities. Unlike most narcissists, however, I have formed a couple of lasting relationships, and I don’t have any interest in celebrity culture, so perhaps there’s hope for me.

Therefore, in an attempt to remove the way-too-cool mask of my persona, I thought it might be therapeutic to admit to a couple of my guilty pleasures (despite the narcissistic indulgence of doing so in the first place more or less confirms my self-diagnosis). Nevertheless, here goes.

Guilty Pleasure #1. I love reading obituaries and consider myself a master critic of the genre. I read perfect strangers’ obits from the first sentence through their career recaps down through the survivors all the way to where memorials can be sent. I especially take note of verbs indicating passage from this life to non-being. Just last Sunday I read about some 98-year-old who “has stepped into the glory.”

Guilty Pleasure #2. What started out as an anthropological exercise of studying television series The Lone Ranger as an artifact from the Late Fifties has degenerated into a full-blown addiction. How can someone who earns his living teaching literature suspend his disbelief and squander hours watching a show where horses gallop from the wide open plains directly into a film set with fake trees? How can he ignore the never-ending chain of coincidences? The guns shot crisply from hands 20 meters away?  Good questions. Search me.

Guilty Pleasure #3. The Monkees. Not as bad as the Archies, But close. I hasten to add I only own one song, “I’m Not Your Steppin’ Stone.” It could be worse. “Daydream Believer,” for example.

Okay, enough of this confessional shit. I need to get back to writing my memoirs.

One thought on “Guilty Pleasures”