Although Daddy had nothing but contempt for ”bluebloods,” Mama was ambitious for me, a shy and anxious only child, so she immediately accepted Mrs. Tillyard’s invitation to come and play with Lawson at their home.

Situated on a hill, it was an impressive two-story clapboard house with white square columns, high ceilings, faded oriental rugs, and a strange odor – musty, sweet, sad. Pathologically shy, I hadn’t wanted to come, and this strange boy was so pale that you could see blue veins running like rivers underneath his skin. He had long, curly red hair, big blue eyes, and a tiny girlish mouth. He spoke formally, like a character in a book or in an old movie. After shaking my hand, he said, “Shall we go upstairs so I can show you my toys?” 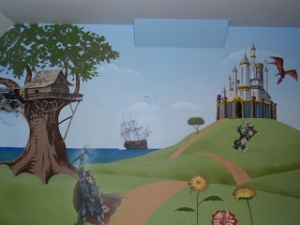 I followed him, glancing back down at Mama and Mrs. Tillyard, who stood stiff-backed and whose hair was already white. I wanted to kiss Mama goodbye, but now she was out-of-sight as I followed Lawson to the end of the hall. Walking on tiptoes, leaning forward at an awkward angle, he opened the door to a room like I’d never seen before. Someone – a skilled artist – had painted on its walls a vista looking out from the battlements of a castle. Silver armored knights on horseback jousted in the distance. Across rolling green hills were dragons, fairies, faraway castles, and a forest. Puffy white clouds floated in the blue sky of the ceiling,

Lawson said matter-of-factly, “Welcome to my own little world.” Then he added, “Close the door. Quickly.”

“I know they call you Trey,” he said, “but what is your Christian name?”

“I shall call you John then. I detest nicknames. By the way, I play with dolls.”

This admission didn’t shock me. He wasn’t the first boy I’d met who played with dolls. He opened one of the hatches of a built-in cabinet that ran the length of the wall and beckoned me to look. His dolls weren’t baby dolls but miniature people, male and female, dressed in costumes from various countries – a Japanese woman, a Scotsman with kilts and a bagpipe, a dark skinned boy with a turban. They were standing in a row, about ten of them, facing sideways in the same direction as if they were waiting in line.

He reached in and retrieved a blonde pigtailed girl in a alpine outfit who had been unprofessionally painted brown. “This is my lady in waiting. Her name is Octavia.”

“Because the real Octavia is brown.”

Just then the door opened, and Mrs. Tillyard and Mama stepped in. I was afraid that they would see the doll and frown, but they didn’t seem to notice. “My word,” Mama said, “this room is like a wonderland!”

Mama smiled weakly, said goodbye and that she’d pick me up at four. I sat there, next to the longest toy chest in the world, and waved goodbye.   I felt more at ease, as if I might have fun playing with Lawson. This was a new world, a lavish world.

He asked what I liked to do, and I said to play checkers, but he suggested Parcheesi instead. He went over to a different compartment of the cabinet and brought out the game, carefully unpacking it. He plinked a pair of dice into one of the four cardboard canisters and handed it to me.

So we played Parcheesi, emphatically counting out the steps of the men, tapping them in the spaces: one-two-three; one-two-three-four.

“I’m afraid I’ve gotten myself into a tragic love affair,” Lawson suddenly said. I glanced up from the board. He was sitting with his legs crossed in front of him while leaning on his right arm.

“I met her at Spells Grocery Store. Have you been to Spells? It’s a dusty, dark, old country store loaded with Mary Janes, Squirrel Nut Zippers, and Tootsie Rolls. It’s there I met Octavia. Love at first sight,but I can tell you right now it’s doomed.”

Although I secretly liked girls, you were supposed to pretend you hated them.

“Octavia is a funny name,” I said.

She’s colored. That’s not an unusual colored name. They seem to especially like old Roman names.”

“Colored as in Alston Elementary School.”

Though I didn’t look up, I could tell he was staring at me. “You shouldn’t kid like that,” I finally said.

“I’m not kidding. She’s the most beautiful girl in the entire world.”

I could see that he wasn’t kidding

“Beauty is in the eye of the beholder,” he said.

I rattled the dice and cast them.   My stomach was tightening, beginning to cramp. Although you were supposed to be nice to colored people, loving them was unthinkable, far worse than playing with dolls. I wanted to call Mama, but I was scared to because she wouldn’t believe that my stomach really hurt. “I’m tired of playing this,” Lawton said. “Do you want to see my very favorite toy? What’s the matter with you? Are you crying?”

“Perhaps, it is something that you ate,” he suggested. “It’ll go away.”

“That you promise to come see me again when you’re better. You’re not stupid like the boys Mother calls and brings around here. And I haven’t shown you my model castle or toy knights and damsels and dragons and ogres. Do you promise? I mean to come again? Give me your word of honor.”

I never did go visit Lawson again. On the way home in the car, I told Mama when she started fussing how Lawson liked to play with dolls and that he was in love with a colored girl. When Mrs. Tillyard later called to invite me over, I heard Mama whisper a lie into the telephone receiver. I hadn’t known my mother was capable of lying. Eventually, Mrs. Tillyard quit calling, and after Lawson left for boarding school up north, my memory of him and his own little world faded.

On weeknights, Daddy would come home from the Shipyard, turn on the Walter Cronkite, and we would watch in black and white the belligerent Mississippi sheriffs, the policemen with fire hoses, the snarling German shepherds. Then one day, I found myself in Spells Grocery, and I remembered Lawson and Octavia, and I think I might have seen her counting out pennies on the counter, a tall, graceful, barefooted girl with cornrows and a calico dress.

One thought on “Our Own Little Worlds”