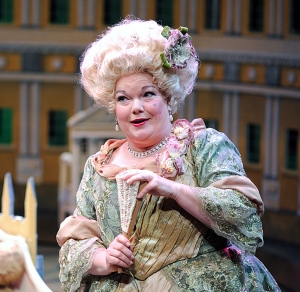 Somehow I copped an undergraduate degree in English and earned 24 graduate hours without ever running across Mrs. Malaprop, one of the great comic characters of the English stage. Nope, I didn’t make her acquaintance until I started teaching high school, specifically Richard Sheridan’s The Rivals, a 1775 play.

It is from Mrs. Malaprop, a pompous fuddy-duddy moralistic widow, that we get the word malapropism, that delightful linguistic confusion that arises when someone stretches her vocabulary just a bit too far, confuses polysyllabic words, and makes a colossal ass out of herself.

You thought, miss! I don’t know any business you have to think at all — thought does not become a young woman. But the point we would request is, that you will promise to forget this fellow — to illiterate him, I say, quite from your memory.

Through the course of the play, she reprehends true meaning, bemoans the slight affluence she has over her niece, can’t provide the perpendiculars of a murder.

Certainly, Archie Bunker can trace his line of descent through her:

“I ain’t a man of carnival instinctuals like you.”

“The hookeries and massageries…the whole world is turning into a regular Sodom and Glocca Morra.”

Then there’s that earlier African American sitcom character, Mr. George “Kingfish” Stevens of The Amos ’n’ Andy show from the ’50’s who not only “resents the allegation’ but also “resents the alligator.”

Of course, malapropisms aren’t only the domain of fictional characters. Can you name the following real life malapropisms with their linguistically challenged flesh-and-blood originators, three of whom are politicians and two baseball hall-of-famers?

1. Republicans understand the bondage between a mother and a child.

2. Oftentimes we live in a processed world; you know, people focus on the process and not the results.

4. “The players returned to their respectable bases.

5. “Texas has a lot of electrical votes.”

Oh, yeah, the answer to the question — what would you get if you crossed Mrs. Malaprop  with George W Bush — is the great and beloved Yogi Berra.

Now, thet answer to that question is what Yogi once called a very close game, i.e.,  “a cliff-dweller.” 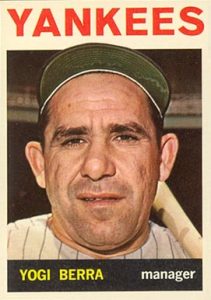 2 thoughts on “What If Mrs Malaprop and W Had a Baby?”