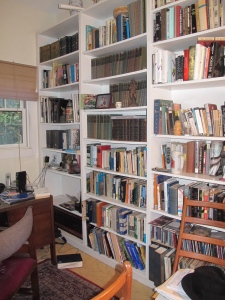 Back in the late 80’s, when academics were more demanding where I teach, I included a section on my exam called “Association.” Students had to match a character or work they had read that semester with an enigmatic phrase I provided — only there was nothing to match the phrase to, no list of possible choices. When they complained, I told them all they needed to do was to read my mind.

Of course, no way I get away with something like that nowadays. Parent-piloted Blackhawks would be raining rockets on my drafty garret, Hoodoo Headquarters.

Just for fun, though, I thought I’d recreate “Association” for this post. See if you can identify these novels, plays, or long poems.  Of course, it’s going to be harder for you since your choices aren’t confined to a limited number of works you’ve read in the last five months.

2. Doing Dublin in a Day from St Stephen’s to the Quay

5.  Un-Moored, Senator’s Daughter Couldn’t Be Any Poorer, According to O’Connor

6.  Mama’s Boy Outwits Catty Riddler, Wins Crown, Then Goes Down, Down, Down

8.  Jake Lost His Snake in a Trench So He Drinks.

1.  Pride and Prejudice:  15-year-old Lydia’s elopement with Wickham provides Darcy the opportunity to save the Bennet family from ignominy and bring about the twin marriages that bow ties the novel with the very happiest of endings.

3.  The Sound and the Fury:  Part One is literally narrated by an the idiot, Maury/Benjy; Part Two features Quentin’s yanking the hands off of his great-grandfather’s pocket watch; Part 3 is a tale told by a Southern bigot; Part Four completes the Fall of the House of Compson.

5.  Othello:  Note Moor is capitalized. Othello’s wife Desdemona is the daughter of a Senator, and Flannery O’Connor perhaps not-so-famiously said, “You can’t be any poorer than dead,”  which Othello and Desdemona are at the end of the play.

6.  Oedipus Rex:  After killing  the king his daddy in a fit of road rage, Poor Eddie answers the Sphinx’s riddle, becomes the king of Thebes, marries his mama, and goes down, down, down.

7.  The Waste Land:  It’s an echo chamber of allusions. Here are specific references in the riddle: The first line of TWL is “April is the cruelest month.”  There’s a Tarot reading in “The Burial of the Dead” section.  From “The Game of Chess:” we get “When Lil’s husband got demobbed, I said.”  Also, finally there are several  lines spoken by a hysterical woman.  E.g.,   “What are you thinking,  What thinking?  Think.”.

8.  The Sun Also Rises.  Jake Barnes loses unspecified parts of his reproductive system during WWI and spends the course of the novel easing his pain via alcohol.

9.  Ralph Ellison’s The Invisible Man shares the same title of HG Well’s novel, only the protagonist of Ellison’s novel is black and not literally invisible.

10.  The Metamorphosis:  Gregor Samsa, a dutiful son, metamorphoses into an noxious insect (and not because he had received vaccinations),