After listening to the SOTU address the other night, I’ve decided that If I had the dictatorial power to outlaw any adjective in contemporary English usage, it would be 21st Century – as in 21st-century economy, 21st-century technology, 21st century classroom.

After all, we’re a decade and a half into the century, so, c’mon, let’s drop the term and simply say current economy, current technology, etc., or future economy, future technology. I’m certain no one will think you’re talking about the 5th century BCE when the conversation turns to contemporary pedagogical practices. 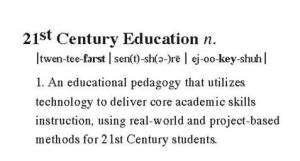 As a teacher, I hear the phrase 21st Century education or 21st century classroom virtually every day, thanks, I suspect, to Thomas Friedman,* whose bestseller The World Is Flat spawned scores of educational entrepreneurs seeking fortunes by informing parents and teachers in books and lectures that books and lectures are relics of the past.

21st education, they say, demands “new building blocks for learning in a complex world,” and for students “to survive and thrive” in “[this] complex and connected world,” teachers must ditch abaci, slide rules, TRS-80s, and equip classrooms with state of the art technology. We need to abandon lectures and tests and embrace project-based, collaborative learning so we can produce technologically literate capitalists who, though they might think the Ottoman Empire is an HBO mini-series, know how to collaborate and find answers to their questions in a rapidly changing, increasingly interdependent world.

You see, I got the rap down myself. 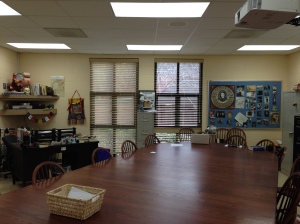 Don’t get me wrong, I’m not against technology. For example, in the accompanying photo of my classroom, you can see I use a table and chairs.

(Technology is, after all, defined as “the embodiment of a technique,” so strictly speaking chalk, slate blackboards, bobby pins, and bongs all fall under the category of technology).

Tables, invented by the Egyptians circa 3300 BCE, are not common in contemporary classrooms, unlike puzzle-like individual desks that interlock in threes for group work; nevertheless, I find that having students sitting in an oval facing one another facilitates polite discussions, as King Arthur himself realized, he being on the cutting edge of 6th century CE innovation.

Around the table we can tackle a subject in depth, learn from each other, disagree, counter argue, explain, and question without the distraction of open laptops and cell phone notifications. And, by the way, how do you efficiently provide students with all the information they need to fully understand a comprehensive subject without lecturing? How am I going to provide them with an overview of 18th Century British culture unless I explain empiricism, deism, coffeehouses, etc?  And by lecture, I mean Socratic lecturing, asking questions, soliciting opinions, not merely standing there behind a lecturn droning on about Juvenalian satire or neoclassic architecture.

As far as introducing students to technology, it seems to me that the authors of these books must not hang around many 21st century children. Whenever I have problem with hard or software, I can count a student coming quickly to my aid, and it has been my experience that sometimes they are even more adept than our IT department (which is excellent) in quickly finding a solution.

On the other hand, their vocabularies have shrunk appreciably since I started this gig in 1985, as have their attention spans, which I blame on quick-editing on Sesame Street and ear buds. (Click HERE on my invaluable guide to childrearing). 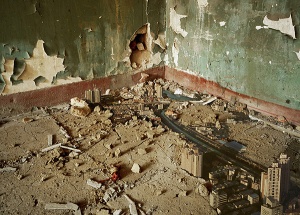 Of course, this minor irritation of people echoing the 21st century cliché is bound to abate as we get further and further into the century. I suspect that the denizens of the American dystopia of 2075 will have stopped using 21st-century as an adjective, as they scrounge around the depleted planet exercising their 2nd Amendment rights because their grandparents voted for politicians who didn’t believe in science, but, alas, I won’t be around to enjoy not hearing it.

*The same Tom Friedman who from the Op-ed pages of the NY Times urged us to invade Iraq and depose Saddam because it would engender the spread of democracy across the Middle East. So much for his soothsaying.