Words certainly fail us when it comes describing smells – flowers, sewers, and as it turns out, comets.

How, for example, can we convey the odiferous deliciousness of Osmanthus fragans (aka tea/sweet olive), that evanescent wafting olfactory hint of autumn?

Essentially, all you can do to attempt to replicate the experience of smelling is to employ a noun and have the reader associate that noun with the smell: pine, smoke, cedar.

Fred Swan, a wine expert, offers this explanation of why:

Aromas bypass the thalamus entirely. They go from the olfactory bulb to part of the amygdala. The amygdala is also crucial for processing long-term memories and some aspects of emotion. So, with apologies to the brain surgeons among you who will be writhing in pain at this generalization, our sense of smell is uniquely tied to our memories and emotions but is more separated from our words than the other senses.

I certainly won’t live to see the day when our computers are able to reproduce smells by a stroke of a keyboard. You can digitalize a photo, digitalize a sound, but you can’t digitalize an odor.*

This inability to capture odors isn’t that big of a deal, unless you’re trying to imagine how something alien smells — like a wild boar, a 19th Century Parisian courtesan, or say, a comet. 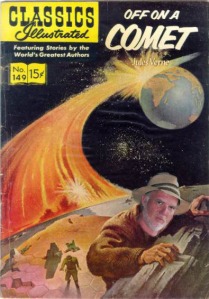 the author wishing he had a gas mask

The nose boggles trying to conjure the combination. Certainly the obvious go-to phrase “smells like shit” won’t do.

Consider then what must be the foulness of the air of [a comet]. Imagine some foul and putrid corpse that has lain rotting and decomposing in the grave, a jelly-like mass of liquid corruption. Imagine such a corpse a prey to flames, devoured by the fire of burning brimstone and giving off dense choking fumes of nauseous loathsome decomposition. And then imagine this sickening stench, multiplied a millionfold and a millionfold again from the millions upon millions of fetid carcasses massed together in the reeking darkness, a huge and rotting human fungus. Imagine all this, and you will have some idea of the horror of the stench of [a comet]. (Joyce, Portrait of the Artist as a Young Man}

One thought on “What Exactly What Does a Comet Smell Like; Plus, Why Is It So Hard to Describe Smells?”