I’m sincerely glad to see that so many of my compatriots are giddily suffering the delirium associated with World Cup fever.

I’ve witnessed hordes of them on television, men and women, boys and girls, painted like patriotic Comanches, flag-draped, chanting USA-USA-USA. I’ve seen my countrymen go apeshit over a USA goal, and after Portugal’s last minute score, I’ve seen them wear the horror-stricken dazed looks of family members gathered at an airport after a plane crash. 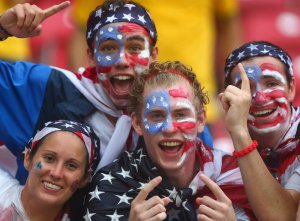 Perhaps, the number of North American fútbol fans will increase through extended exposure to the balletic-Bataan-death scramble of a soccer match, learn to appreciate 90-plus minutes of virtually non-stop action, understand the arduous difficulty of netting a goal, and so will become more tolerant of low scores and tied matches.

Let me hand the mike over to my pal Charlie Geer who offers this unflattering description of the other American football:

Visitors to the US should understand that American ‘football’ is a game in which ‘foot’ and ‘ball’ have very little interaction with each other. This is but one of the many mysteries surrounding the popular American sport, which requires (metric) tons of equipment, dozens upon dozens of players and coaches, innumerable false starts and sudden stops, as well as an unending stream of television advertisements to move a ball from one end of a field to another. Because of the beastly amount of time and crap required, a team that successfully moves the ball from one end of the field to the other is awarded not one point, but six. Some Americans, it seems, like their scores the way they like their houses, their cars, and the egos of their professional blowhards: overinflated.

Of course, ideally, one can appreciate both, as, in fact, Charlie does, though unfortunately in the guise of a Florida Gator fan.

Another thing, however, that distinguishes fútbol from football is that the latter is essentially a North American peculiarity whereas fútbol enjoys world-wide popularity. In American football, we don’t even have a professional North American championship game between the Canadian Gray Cup and USA Super Bowl champions, no epic battle between the Miami Dolphins and Edmonton Eskimos, much less a world wide championship.

On the other hand, in international fútbol, any number of nationalistic matches can take place, for example, games pitting Koreans versus Venezuelans, Algerians versus Finns, or, good old fashioned shootouts like the upcoming match between France and Germany.

Which brings me to my final point: the 2014 World Cup tournament coincides with the Centennial of WWI, a conflict I never quite understood the origins of, despite my university education. Take it away Mr. Dylan:

It closed out its fate.

The reason for fighting

I never got straight.

The best that I can tell the assassination of an Arch Duke sparked unstable, combustible European nationalism into a horror show to end all horror shows, which, of course, didn’t end up being the case at all. But what has struck me watching several of these games is the frenzied nationalism that is apparent as the camera cuts to public squares around the globe.  Negative social critic that I am, I find all of the flag waving and screeching sort of creepy, unsettling, especially given the above-mentioned coincidence.

The truth be known, I have never been much of a patriot. Perhaps my lack of patriotism stems from hearing as a young boy the unreconstructed rantings of great-grandfathers or my coming of age during the Viet Nam War or the general misanthropy that makes me a non-lover of my fellow man. After all. most people I encounter happen to be fellow Americans, and I hate it when we change the name of French fries to freedom fries or when Waffle House stops selling Belgian waffles on game day. (They’ll take away my high-gravity Belgian beer when they pry the can away away from my stiff dead fingers).

On the positive side, perhaps Konrad Lorenz was correct, that sport provides a substitute for humans’ innate drive to wage war, and the World Cup affords a vicarious opportunity to channel that animus into non-destructive avenues.

At any rate, today I plan to venture from the bobby-trapped carapace of the Moore/Birdsong compound (beware the Burmese tiger pit, solicitors, the Malay man-catcher, Jehovah Witnesses) to enjoy the game at my favorite watering hole, Chico Feo, where I’ll try my best to pull for Clarence Thomas’s team.