Hello, college student. I can’t believe that slave-driver of a professor of yours has assigned Titus Andronicus. Smart move coming here. Believe me, after reading this summary of the plot, you’ll be praising Jesus you didn’t give the text a try. In fact, the plot is so conjunkificated with murder and mayhem, you might not even get through this easy-to-read amped up version.

Note, I’ve modernized and shortened the names of the characters. Before taking a test or writing a paper, you gotta check out Wikipedia for the real deal on what these fools actually went by back in the day.

Okay, let’s get this over with.

Protagonist Titus sacrifices the eldest son of Tammy, Queen of the Goths, to avenge the deaths of his own sons killed during a 10-year campaign against her people. Titus turns down offer of becoming emperor (bad, if not tragic mistake) and supports the previous emperor’s son Satch’s claim to the throne, much to Satch’s younger brother’s Bass’s chagrin. Satch promises to marry Titus’s daughter, Lavinia, even though she’s engaged to aforementioned younger brother Bass.

You following? Bass done been double-dissed.

Titus’s surviving (but not for long) sons Quinn, Martin and Matt point out to stubborn daddy that Roman Law sez Bass gots first dibs on Lavina, but Titus don’t dig backtalk from offspring and accuses the boys of treason. In the subsequent ensuing scuffle, Titus slays his own boy Matt, which prompts Satch to denounce the crazy-ass Andronicus clan.  So he marries Tammy, whose lover, the moor Aaron makes Iago look like Al Roper in evil comparison.

Next day, on a royal hunt Aaron convinces Tammy’s sons Demmy and Ron to kill Bass so they can rape Lavinia. “Sho nuff,” they say, do the deed, dump poor Bass’s body in a pit, drag Lavinia into the woods, rape her, then lop off her tongue and hands so she can’t squeal orally or in writing. Aaron then forges a letter that frames two-thirds of Titus’s surviving sons, Martin and Quinn, for Bass’s murder, so of course, Satch arrests their asses.

Okay, Titus’s brother Marcus finds mutilated Lavinia and takes her to Titus, who’s still reeling from the accusations leveled at Martin and Quinn. Enter Aaron the Moor with an alleged message from Satch saying that he’ll spare M & Q if Titus or brother Marcus or remaining son Luke cuts of one of their hands and sends it to Satch. Titus volunteers and lets Aaron hack off his left hand.

What was he thinking? Who knows? 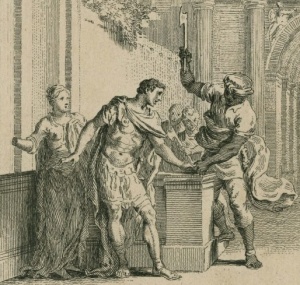 Is this making sense? You see, it’s all about vengeance.

Guess what?  Aaron double crosses Titus. A messenger delivers to Titus the severed heads of his sons Martin and Quinn along with his own severed left hand.

Finally, Titus has had enough, time for revenge. He sends last son Luke off to raise and army among their previous enemies the Goths.

Resourceful Lavinia picks up a stick with her mouth and using that orifice and her two stumps writes the names of assailants Demmy and Ron in the dirt.

Tammy (who seems as adept as Sarah Palin in hiding pregnancies) gives birth to a bi-racial child. Aaron kills the midwife and nurse (after all, cutting off tongues and hands is no guarantee of silence) and flees with his baby, only to get nabbed by Luke with his Goth army in tow.  Luke threatens to hang the baby unless Aaron sings, which he does, like a magpie, tells all of the above in blank verse.

Aaron and his newborn baby

Meanwhile, back in the Imperial City, Titus pulls a Hamlet and feigns insanity, sort of.

Thinking Titus is insane and might buy a staged visitation of spirits, Tammy, Ron, and Demmy dress up like allegorical manifestations of Revenge, Murder, and Rape and tell Titus they’ll grant him revenge if he talks son Luke out of attacking Rome. Tammy splits, but Titus talks Demmy and Ron into hanging around.

He slits their throats, grinds their bones, and bakes their heads into a cake.

Next day Titus throws a feast and asks Satch if a father should kill her daughter if she has been raped. “Of course,” Satch says, so Titus kills what’s left of Lavinia.

When Satch calls for Ron and Demmy, Titus informs him that they’re in the cake mother Tammy’s munching on.

Titus kills Tammy, Satch kills Titus, Luke kills Satch, is crowned emperor, orders Tammy’s body to be thrown to the wild beasts that hang out outside Rome’s city limits, and sentences unrepentant Aaron to be buried up to chest to starve and/or die of thirst.

Aaron rues not being able to live longer because he feels as if he hasn’t done enough evil in his life. 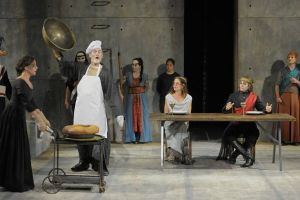