[Cue Percy Sledge]: that funereal organ those drums tapping out a rhythm befitting a march to the gallows:

I found a woman I felt I truly loved.
She was everything I had ever been dreaming of.
But she was bad; I didn’t know it.
Her pretty smile never did show it.
All I knew is what I could see,
And I knew I wanted her for me. 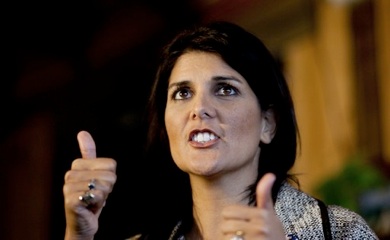 Too bad McMaster, Bauer, or Sheehan didn’t tap Percy’s “Take Time to Know Her” for his campaign theme song when running against our mathematically/ truth-challenged Governor. Perhaps the righteous gospel undertones of Percy’s dirge might have infiltrated the ideological fortresses of the heavily garrisoned but ultimately impoverished minds of hourly employees who want to see estate taxes abolished, those folks who like to hear their prejudices echoed with panache.

If played often enough, Mama’s wise words – it’s not an overnight thang/take time to know her/please don’t rush into this thang – might have infiltrated the unconscious to tap into some not-quite-yet desiccated pool of ancestral wisdom. 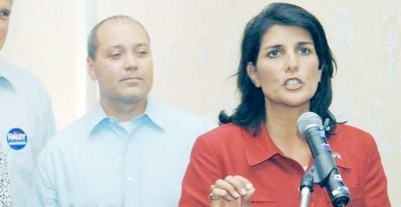 Michael “Tammy Wynette” Haley Stands by His Woman as She Counts to 5 Outloud.

A modicum of caution might have been in order: after all, Nikki was, as they say, an unknown, untested: a degreed but uncertified non-public accountant doing books in her daddy’s business, a woman married to an under-employed husband, the two bearing a $300,000 mortgage on a $40,000 income.

With her political office comes a sudden spike in prosperity – a 6-figure salary with Lexington Hospital for a 50K job, a cushy National Guard gig for her seemingly non-officer-grade husband. (Elsewhere, I’ve written about those pesky extra-martial rumors). But hey, South Carolinians weren’t the only ones to go gaga. That permanently constipated pundit George Will un-pursed his lips for some praise:

The political class and its parasitic lobbyists preferred government conducted in private.  Haley, whose early campaign strategy was exuberantly indiscriminate (“go anywhere and talk to anybody”) won the gubernatorial nomination by defeating the state’s lieutenant governor, its attorney general, and a congressman.

Ah, but I digress. My point, dear citizens, to quote the great Tom Waits, is that “the large print giveth, but the small print taketh away.” [Warning: oncoming barrage of mixed metaphors]: Before dumping your spouse for a sexpot. do the following: kick the tires, pour over those background checks, draw up an ironclad prenup.

Take time to know her.

In short, don’t spasmodically fall in lust and marry some tawdry tea party gal who runs with flashy frontier women, or you might end up with a kinghell case of buyer’s remorse. 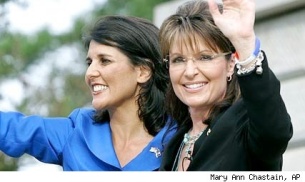 Come to think of it, George Will might be on to something about one aspect of change in South Carolina. At least no one during the campaign except Jake Knotts was overtly racist/xenophobic. It’s not hard to imagine the Late Lee Atwater would have done if he were running the McMaster campaign. I suspect flashing the pix below as a stentorian basso wonders ad nauseum if she really is one of us?

That hair-do in the held snapshot looks more Pentecostal than Sikh to me. No, Nikki is one of us. In fact she’s old school, a practitioner of cronyism, and you have to admit that she’s certainly been transparent when it comes to that.

What type of person makes this type of mistake:

Then state Rep. Nikki Haley’s application for a job at Lexington Medical Center reported she earned $125,000 a year – more than five times the amount that Haley, now SC Governor, said she earned on her federal tax returns.

That application also said Haley expected to be paid the same amount – $125,000, a year, according to hospital documents obtained in a public records request by the State.

Haley’s federal tax returns show she was paid $22,000 by her parents’ clothing store, Exotica International, during 2007.

A careless person? A dishonest person? Her spokesman points out that such a discrepancy is illogical, so Haley couldn’t have done it, and that anyway, whoever had filled out that particular page hadn’t signed it and that the page also lacked the official stamp that embossed the other pages of the rest of the application. Maybe some Democratic hacker stole her pin number and social security number and fabricated the form and sneaked into the hospital offices and slipped it into Haley’s application file Mission Impossible style.

Or, but this seems so much less likely. Maybe she lied about her salary, intentionally didn’t sign or stamp the form (in case something like this ever came up).

On the same day that the State published the salary discrepancy story, they also informed us that Haley had removed the most generous benefactor in the state’s history (Darla Moore who donated 70 million gift to the Business School at USC) from the board because she “wanted a new set of eyes,” so she replaces Moore (for whom the Business Department is named) with a Columbia lawyer who just happens to be one of Haley’s biggest campaign contributors.

I mean, this woman is a piece of work.