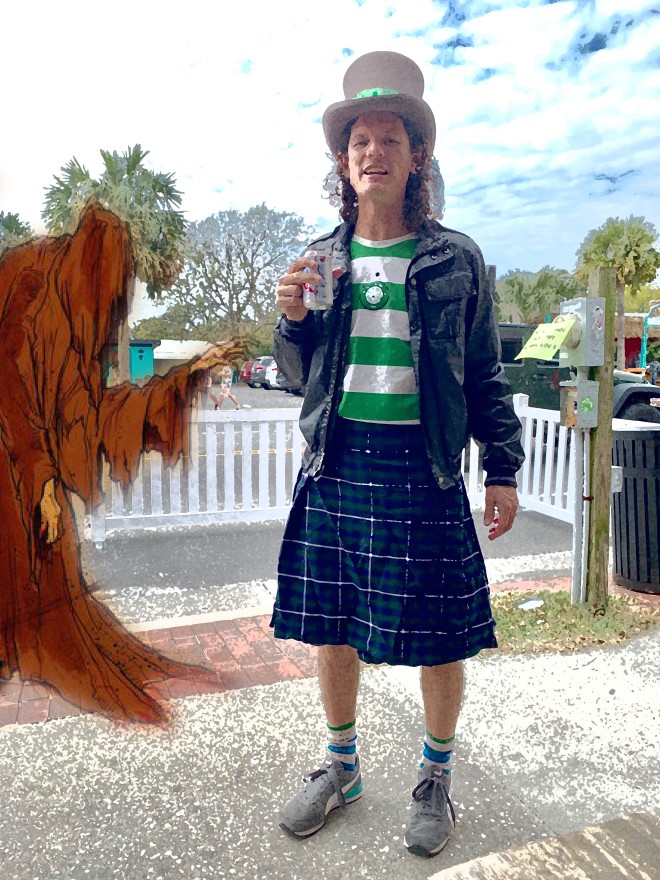 Of course, whenever there’s a celebration on Folly Beach, I shed the fedora and don my pith helmet to study the folkways of the island’s men and women, whether they be our ancient, reptilian residents who seem to make up the majority of the population[1]; the younger year-round renters who often work in the food and beverage industry; the bourgeois house-renting vacationers; or the daytrippers, which include surfer dudes and dudettes, but mostly consist of young people eager to ditch their sobriety.  The question arose: what type of person (besides intrepid anthropologists) seeks out crowds during a pandemic?

I began my foray early, keeping at least six feet away from those as foolhardy to brave the great outdoors as I walked to Center Street via the beach. The strand itself was wind-swept, and the few cloud-bathers who braved the beach had placed their chairs and blankets on the leeward side of the concrete groins where they huddled and shivered. Most of the other beach strollers consisted of dog worshipers, who barely outnumber the host of young females who have chosen The Edge of America as the destination for their bachelorette parties.

Over the course of the day, I counted six different groups engaged in celebrating the waning days of some betrothed female’s singledom. Depending on the socio-economic situation, the attire of the ladies ranges from civvies to tee-shirts printed for the occasion. Although anthropologists are not supposed to let ethnocentric emotions like pity come into play, I felt sort of sorry for these chilly, less-than-festive seeming young women in short sleeves hugging themselves.  Who can blame them, having planned the events months ago not knowing it was going to be a Masque-of-the-Red Death weekend?

Indeed, the numbers of revelers who decided to come out was scant. It was like, as Caroline noted, living in Charleston thirty years ago when parking spaces were plentiful and sidewalks easily traversed. I began and ended my fieldwork at Chico Feo with brief stops at the rooftop of Snapper Jack’s, St. James Island Pub, and the Sand Dollar Social Club (cash only).  Here’s a virtual visit for my social-distancing readers.

On a typical St Patrick’s Saturday on Folly, these venues would have been packed to, as they say, the gills.